Posted on March 7, 2012 in Trolleybuses, Wellington 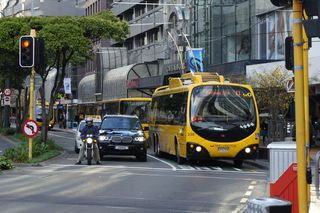 In a network redesign for Wellington, New Zealand that I led last year, we assumed that it was more important to design the network around customer needs than to maximize the use of trolley buses.  So we designed some routes that run partly under trolleywire and partly not, and that are therefore to be run (for now) by motorbuses.  A study of the future of trolley buses in Wellington is soon to begin, but as I said in my last post on the subject, they wanted their trolleybus policy to follow from the city's transport network, rather than preceding and constraining it.

One commenter said this was the wrong priority:

"This seems unwise to me. The benefits of trolleybuses are so great that it would often be better to run a trolleybus on a somewhat suboptimal route than a motorbus on a more optimal one. Thus any proposed routes or route changes should absolutely take into account the political and technical feasibility of operating the new routes with trolleybuses.

I am fairly familiar with the large trolleybus networks of San Francisco and Vancouver, and both have stretches of trolley wire that are no longer used much because the bus route underneath them had ceased to make sense as part of the larger network.  But I can also think of examples where buses still do pretty weird and possibly obsolete things so that they can stay on trolleywire.  Seattle's network, for example, is much more wire-constrained overall.  (A Seattle network designed without wire in mind, for example, would almost certainly make it easier to access Queen Anne Hill from the north.

Because trolleybuses boomed in the 1940s-60s but then stagnated, most trolleybus lines in North America (and New Zealand) have been unchanged for 50 years or more, while the city has grown and changed around them.  As a city's demand expands, and especially as it grows more multidirectional, routes need to either extend or be revised to fit a new structure that meets the new needs.  Trolley wire can become an obstacle to doing that.

Vancouver's 41st Avenue the clearest example.  Today, almost all service at the west end of this busy transit corridor extends to the University of British Columbia, about 7 km beyond where the trolley wire ends.  UBC is now a superpower ridership source at almost all times of day.  Should trolleywire be extended the rest of the way?  Quite possibly, but right now, it would be absured to run 41st Avenue buses ending 7 km short of the university just because the wire ends there.

I certainly believe in the long term future of trolleybuses as part of both an emissions strategy and as protection against fossil fuel cost volatility, but sometimes the existing wire is just in the wrong place. Argue for more wire, yes, but meanwhile, should we just treat the trolleybuses as separate and inviolable, no matter how obsolete or problematic their routes become?

quote of the week: “so many trains, so many buses!”
welcome, atlantic readers

42 Responses to dissent of the week: trolley buses in wrong place vs motor buses in right one

You are here: Home › dissent of the week: trolley buses in wrong place vs motor buses in right one