What's shocking about this idea? 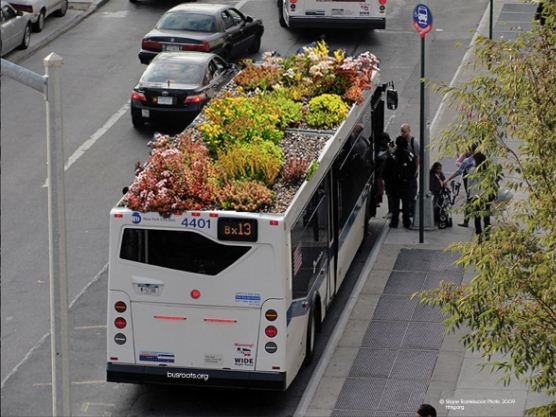 Nothing.  We've had a decade of people proposing to garden every sun-facing surface in the city, ideas I often support.  So it would be astonishing if doing it to bus roofs had not been proposed.

What's astonishing is that when Marco Castro Cosio proposed it, calling it Bus Roots”, the result was this:

[Marco Castro] Cosio's “Bus Roots” idea has garnered loads of praise, earning the runner-up spot in Designwala's 2010 urban-design competition and landing in 2011's Festival of Ideas for the New City, an event in NYC meant to “harness the power of the creative community to imagine the future city and explore the ideas destined to shape it.”

Publications and websites from France, Japan, Canada, Germany and elsewhere have similarly swallowed Bus Roots uncritically, publishing Photoshopped images from Cosio's thesis that suggest these buses could be out there right now, carrying passengers. The most recent offender is Wake Up World, which ran with this Feb. 27 headline: “Gardens Flourish on Top of City Busses.” Three problems: “Gardens” should be singular, because there's only one garden, a small prototype atop the BioBus that's growing sedum. “Flourish” is much too enthusiastic a verb for what the sedum is doing; the ornamental stonecrop basically sits there at ankle height doing nothing. …"

You can find other misleading stories here, here and here.

That's from today's Atlantic story by John Metalfe.  And "misleading" is right, becuase this idea has serious problems of physics, which Metcalfe patiently explains.  How much more fossil fuel do you want to burn (and greenhouse gases do you want to emit) to haul hundreds of water-heavy gardens around your city, all located so that most people will never see them?

It would be nice to imagine a day when you can't win urban design prizes for things that are physically or geometrically impossible.  Violations of the laws of physics often look inspiring.  That's why we have the image of heaven as built on clouds, an idea that continues through many imagined cloud cities and shows up as Avatar's airborne land formations.  Those formations may deserve a film design prize, but if you called them landscape or urban design, some check against the facts of physics would be in order.

But there's a also a humanistic problem issue with gardening the bus roof.  Like bus wraps, it implies that public transit design shouldn't be about public transit customers.  Riders, like most of the public, would never enjoy Cosio's roof, but they would certain experience the sensation of heaviness that comes from being under all that weight.

As Metcalfe points out, there's actually a lot of important stuff on a bus roof, but there's also a question of who the design should be serving.  I would like to see much more transparency in vehicles, extending to the roof as you see on tourbuses, so that we can break down this sense that the bus is box in which you must be stored for transportation.  My goal is that you should be able to be on a bus while also still being on the street, engaged with the whole urban environment.  For more on that, see Chapter 15 of Human Transit.

salon: it’s time to love the bus
quote of the week: “so many trains, so many buses!”

26 Responses to gardening the bus roof: a pretty idea but …

You are here: Home › gardening the bus roof: a pretty idea but …