The City Builder's Book Club is in the process of reading Jane Jacobs's seminal 1961 book, the Death and Life of Great American Cities.   For Chapter 18, which deals with transportation, I did a guest post for them designed to kick off their discussion.  It's there, but also here:

Chapter 18: "Erosion of cities or attrition of automobiles?"

The frame of the question is striking: “Erosion of cities or attrition of automobiles?” Both key terms, erosion and attrition, warn us of a gradual process, a process we might not notice as we focus on the shiny revolution of the moment.

They warn us too, that the causes will be multiple and probably untraceable. Jacobs is adamant that the automobile itself didn’t cause sprawl, just as it didn’t cause traffic congestion; the horse-and-buggy era already offered the possibility of both. So, the attrition of automobiles, as it’s achieved, will have many causes and effects. Each needed but compromised revolution – market-based parking, congestion pricing, major transit, complete streets, road diets – will take due credit for this attrition, but it will really happen through individual choices, and of course the liberation from habit that comes only from the turning of generations. 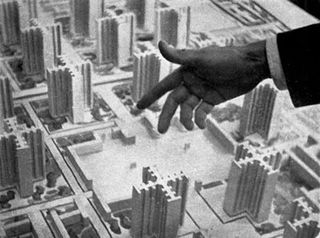 Early on Jacobs attacks Corbusier for failing to run the numbers on the freeways that were supposed to serve the massed apartment towers of his Radiant City (left). The free flowing traffic in his drawings would have been gridlock, and “his vision of skyscrapers in the park degenerates … into skyscrapers in parking lots.” Corbusier’s freeways are “embroidery,” – surely an insult to that delicate craft – adding a mood or symbol of transportation rather than providing actual mobility. Many urban “visionaries” still do that, of course, implying that a new transportation tool will be so cool to ride or drive that nobody will care if it provides the volume and efficiency required, or fits into a network that will get everyone where they need to go.

Like many urbanists, Jacobs is not very interested in how public transit works, even though it is clearly the mode that must grow as the role of cars gradually shrinks. To anyone who values pedestrians, the mode that delivers as pedestrians beyond their walking range surely deserves more thought. But what she does observe is astute.

For example, she notes that forcing surface transit to use one-way couplets is a way of sacrificing transit’s needs to those of cars, and causes a gradual loss in transit’s effectiveness. (You need transit in both directions for it to be useful in either, and moving the two directions of service apart reduces the area that can walk easily to both of them.) One way couplets aren’t universally evil. They are an essential feature of downtown Portland, for example, and work well with its 200 ft blocks. But one-way couplets that are further apart are another story, sometimes serving completely different neighborhoods with their two directions.

Still, Jacobs knew, from watching New York streets, something that transportation planners needed several more decades to establish: in a dense and active city that is rich with mobility options, there will be as much car traffic as the city chooses to make room for. Her story about the closure of the roadway through Washington Square Park – which resulted in traffic simply disappearing – is the story of San Francisco’s Embarcadero Freeway 30 years later, and of other road capacity removals from the expressways of Seoul to the boulevards of Paris. The traffic that used the formerly busy road disappears, through countless private readjustments, so long as there is an abundant grid of alternate paths into which traffic can disperse, and other modes, such as public transit, to which it can convert, and other times of day to which it can shift its travel. (Anthony Downs later coined the term “triple divergence” to describe these three universally available paths of dissipation.)

This is how attrition of automobiles works. And apart from grand gestures like a freeway removal, it is mostly the work of small, steady work: little increases in friction to cars that subtly shift a balance. Jacobs coins the beautiful term attrition tactician – which conjures balding men in dark rooms under bright lamps, engineering the moving of curbs by a few inches each year. Only today are we seeing the emergence of the attrition strategist or even attrition visionary – charismatic figures like New York’s Jeanette Sadik-Khan or Sydney’s Mayor Clover Moore who wage the battle on some scale and do not apologize for their feared traffic impacts, nor the imagined devastation to businesses that will result if some people shift to public transit or bicycles.

The charismatic figures have their place, but most achievement is gradual. The doctrine of gradualness that pervades this chapter – and indeed all of Death and Life — is a splendid antidote to all silver-bullet theories of urban transformation, from streetcars to convention centers. Real transformation happens in people’s choices, behaviors and habits. It happens at its own unpredictable pace. We will see it only in silhouette – murky and confused – by looking at transport outcomes, but we will see it directly in the life of the city.

on “pilot” or experimental services
walking in america

11 Responses to jane jacobs on transportation: my take

You are here: Home › jane jacobs on transportation: my take