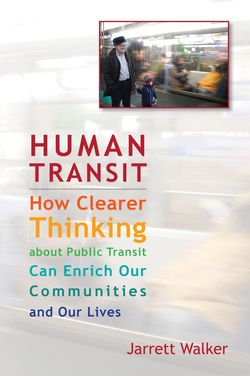 An intriguing take on Human Transit from Josh Stephens at the California Planning and Development Report concludes with this striking thought:

Much of Walker's technical discussions aren't any more riveting than they sound. And yet, it is, on the whole, … a surprisingly un-tedious exercise in armchair planning. Walker loves and believes in public transit, but his awareness of the costs and tradeoffs render him a shockingly neutral advocate (if such a thing is possible). On the one hand, Walker is trying to encourage stakeholders to advocate for better transit systems. But if you read him closely, you might end up with mental gridlock (while actual gridlock grows all the worse).

I can accept being nonriveting — this isn't Stephen King — and am happy to settle for "un-tedious."  Otherwise, I treat this critique as a badge of honor.  To me as a consultant, few epithets are finer than 'shockingly neutral.'  Yes, my book is about helping you and your community think about the real choices that you face.  And yes, to make those choices, you in your armchair (and your community in the real transit planning process) must think about what you want, and sometimes about which of two things you want is more important.

I'm sorry if that gives some people "mental gridlock", but functional human beings and communities do this all the time.  Everyone understands the process of budgeting when money is at stake.  Transit simply requires the similar kind of hard-tradeoff thinking in some other dimensions, including street-space, service priorities, etc.  My book also makes budgeting decisions around transit much easier, because it helps everyone understand exactly what they are buying or sacrificing.

Once, years ago, I was working with a community's elected officials to help them reach a consensus on how they want to balance the competing goals of lifeline coverage vs higher ridership.  (The former goal produces a little bit of service everywhere and the latter produces a high-intensity network only when demand is high. See Chapter 10.)  We were having a contentious public meeting on exactly this subject, with the electeds debating each other and the public inserting a range of useful testimony.  The electeds were going to have to vote.

We took a break, I went to the men's room, and suddenly one of the electeds was at the adjacent urinal.  He whispered: "Hey Jarrett, I know you don't want to say anything out there, but really, what do you think we should do?"

As a citizen I'd have an answer based on my values, but I wasn't a citizen here.  I was here to help a community make its own decision. So my private answer was the same as a public one.  "No!  This is not a technical question. You have to balance your priorities between two things that you value, just like you do when you're budgeting.  This is a chance to express your values, so asking me to tell you what to do is like asking me to tell you who you are."

Obviously, once you've chosen what you want, your consultant will start telling you what's required to deliver that outcome, and in that mode the consultant may sound like an advocate.  But that only happens once the client — you, your community, your electeds — have stated their desires clearly in an understanding of the tradeoffs they imply.

Sorry.  Life's full of hard choices, for people and for their communities.  If it gives you mental gridlock, put down the book or step out of the meeting.  Breathe fresh air, study a flower, or look at the stars.  But sooner or later, you'll decide, or others will do it for you.