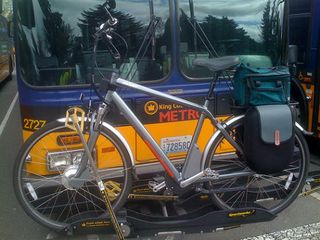 Do you have any examples of buses that can take several bikes rather than just two on the front?  I suggested at the Velovillage conference that transit companies run a competition for designs to put more bikes on buses.  Where i live, many people are left by the side of our roads or at the main bus stop unable to board or have to leave their bike behind.

There are ways to fit another bike or two in. Seattle's King County Metro, pictured, is up to three.

But when you consider the real problem, on-board bus racks cannot possibly be the long-term answer.  Obviously, bus drivers hate anything that reduces their visibility, including downward at something or someone that they're about to run over.  The broader issue is simply that bikes take space, even when they're outside the bus frame, and taking that space has consequences.

For example, exterior bike racks increase the length of the bus.  That means the bus needs a longer bus stop zone, needs more room to turn, etc., and this can easily make the difference in whether a bus line can get through a tight spot where its service is needed, or has to make a detour around it.  Small racks are widely accepted in North America now, but in the long run it should be obvious that bike racks on buses only work if they're not very popular.  The long term solution has to be a range of bike parking and bike rental stations at stations.  This is what you'll see in bicycle-dominated countries in Europe.

33 Responses to email of the week: more bike racks on buses?

You are here: Home › email of the week: more bike racks on buses?