In San Francisco passengers will be able to board through any door of any city bus, as they have long been able to do on light rail and streetcars.  Nate Berg has a nice piece on this at Atlantic Cities.

This could be a very big deal. 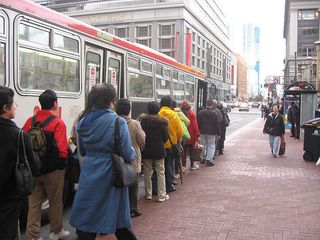 No more of the silliness pictured at right, where passengers who could all board the bus in 10 seconds instead spend a minute or two outside in the rain.  No more tired exhortations to "move to the back of the bus!" because people will naturally distribute themselves evenly throughout.  No more delays due to fare payment problems and disputes.  Fewer angry and threatening signs, like the "stop" sign on the back door in this image.

Obviously this change requires Proof of Payment (POP) fare collection, which has been routine on most North American light rail and commuter rail for a generation (though it arrived in San Francisco relatively recently.)  POP means that you're responsible for having a ticket, pass, transfer slip, etc., called a "proof of payment", and a roving fare inspector can ask you to show it at any time and nail you with a big fine if you don't have it.

If you want to dig down into why so some people hate the bus-riding experience, well, the congestion and delay of front-door fare payment has to be a big factor.  It is a major reason why buses are so slow and unreliable. It also produces inefficiency, hassle, and discomfort that everyone can see: the huge lines to board at the front, the crowding in the front of the bus while there is space of the back.  The whole experience is both unpleasant and an objective cause of delay.

There's also a subtle emotional thing here:  We're required to have a brief interaction with a (quite properly) impatient driver, which can give a subconscious feeling that we're being judged or dismissed. With all-door boarding, we feel free to move through the system by paths that feel direct to us, and we're much less likely to be waiting in line.  If an observer chose to interpret my dislike of this experience as a stigma, front-door boarding might turn out to be part of why some people think there's a  cultural stigma about riding the bus.

Front-door boarding is one of those indignities that people associate with buses but that is not an intrinsic feature of them.  The idea that POP could be done on rail but not buses is just a North American (and Australasian) industry habit.  It makes sense where loads are low, because front-door boarding doesn't involve much delay in that case, but it's never made sense at higher levels of crowding that are now routine in our transit-starved cities.  Sure you need to have an expensive fare collection crew, but you are also saving so much running time, getting people where they're going faster, and so dramatically improving the sensation of civility and freedom in bus riding, that it's definitely worth it.

You do have to get over a hump.  Many people are very upset about fare evasion, and the public usually thinks that it's a bigger problem than it is.  With all-door boarding, you as a passenger can't tell whether others have paid their fares, and when you see a guy who looks shady to you (whatever that means to you in terms of race, class, dress or behavior cues) jumping on the back, you'll now have to assume that he's paid his fare.  It's up to a fare inspector, not you, to verify that.  The reality is that the cost of bringing fare evasion down from, say, 5% to 1% costs vastly more than the fares you'd collect, because you have to hire vast hordes of inspectors to catch those last few hardest-core offenders.  We're better of tolerating a somewhat higher fare evasion so we can spend our money on service.

Don't expect every transit agency to follow San Francisco's lead at once, because there's a startup cost and risk that's hard to face in the middle of a recession, not to mention the whole public education struggle about tolerable levels of fare evasion.  But I expect this to spread rapidly in the major metros if San Francisco MTA has the fortitude to keep it going.  (I suspect all-door boarding is actually irreversable in San Francisco, because all-door boarding will create more capacity that will be instantly used, to the point that going back would require adding more service that MTA can't afford.)

And once it does, the experience of riding buses will a bit more like riding rail, in a way that matters to almost everyone.  Greater speed and reliability.  Less waiting in line.  Less crush-loading  The freedom to board where you want.  Who doesn't value those things?

You are here: Home › san franciso: all-door boarding on buses!