Ever since I posted on SimCity and SimCity 4 people have been telling me I must try Cities in Motion.  But when you have two jobs and you're already devoting hours to a blog and a book and a remodel, there is only so much time for computer games.  Fortunately, Alex Broner has boldly gone there in a guest post, so I don't have to! 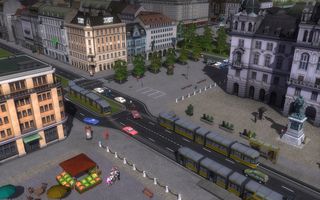 In Cities in Motion (a game by Colossal Order, published by Paradox Interactive), one assumes the role of a CEO of a transit company tasked with providing transit to a particular city. In the campaign mode the cities are all based on specific cities at specific historical periods, Berlin during the cold war for example. There is also a “sandbox” mode in which you can play additional cities including player created cities and fictional cities.

Your transit company operates without subsidies for the most part, though there are “missions” which often offer monetary rewards for their completion. The most common mission is to connect two or more places together with a transit line.

In the campaign mode there are certain required missions which you must complete in order to “win” the scenario and unlock further scenarios.

Your transit company has a variety of different vehicle types which it can use to meet the needs of the city’s residents: Buses, trams, Metro, waterbuses, and helecopters.  There is (premium) downloadable content that adds electric trolleybuses, cable cars, and monorails. 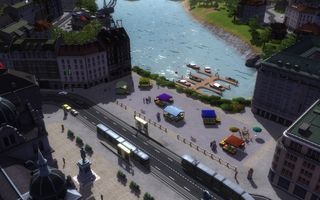 Your success of failure in the game depends on finding ways to efficiently provide service connecting residents with destinations such as workplaces, shopping, leisure, and government. “Leisure” seems to include regional transportation hubs such as inter-city rail stations and airports. Like a real transit company, you must consider expenses for capital improvements such as stations and vehicles and also operational expenses such as labor and fuel/electricity.

This is not a city building game but the connection between density and transit service is made clear by the simple fact that even though you can build a subway to rural or suburban area, very few people will ride it.  The connection between service levels, frequency, and customer satisfaction is made clear by the “wait time” indicator. If the wait time on your transit lines is too long then customers will grow dissatisfied and eventually leave the station. Also, since all infrastructure such as stations and rails has maintenance cost, creating under-utilized infrastructure leads to a poor cost-revenue ratio. 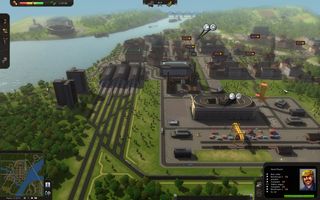 To be successful your agency must take into account the layout of the city and where different groups of people want to go: working class people work at working class jobs, students go to the university, professionals to the offices, and so on. Then you must make choices between vehicle types and network arrangements and put it all together into a profitable enterprise.

All of this is pretty realistic but as I played I immediately began noticing some major problems. The most notable problem is that the “walk shed” for each stop or station is different for each type of vehicle. The game will have residents walk much farther for metro service than they will for buses or trams, no matter how poor the metro service is or how good the buses and trams.

An additional problem is that there is nothing like transit lanes or transit signal priority for buses and trams. The streets of Cities in Motion have various amounts of traffic and in heavy traffic your vehicles will bunch up, depriving you of much needed revenue and making your riders unhappy. One's tools for dealing with this are limited: trams can run on unoccupied ground such as across plazas or on grass. Often in the game I find myself building a tram because there’s a long park or other way to bypass congestion. One can demolish buildings that get in the way of your trams but not build roads or even transit lanes, placing one in the bizarre situation of reaching for the dynamite for lack of paint. In combination the limited walk shed and lack of prioritization tools such as transit lanes means that the game very quickly becomes about building Metro systems. Not only is this unrealistic it’s also quite boring.

On the whole I give the game a B- for gameplay and a C for simulation value. It obsesses over certain aspects of transit (different types of customers, different types of workers, etc) while failing to address some really important ones. It teaches some important things about transit (frequency, density, operation costs) while furthering our confusion about the relationship between technology and levels of service. I would love for the makers of the game to fix some of these problems either through downloadable content or a new release. We need clearer thinking when it comes to transit and while this game doesn’t quite provide it, it very easily could.

[Alex Broner is a graduate student working on his Masters of Urban and Regional Planning at the University of Hawaii with an expected graduation date of December 2012. He is also an intern writer/researcher for the Sightline Institute.  His professional interests are in transportation, landuse, and urban design. Alex is passionate about creating enjoyable urban places where it is easy and safe to walk, bicycle, and take transit. His personal interests include cycling, science fiction novels, computer games, and dodgeball.]

16 Responses to using dynamite for lack of paint: alex broner on “cities in motion”

You are here: Home › using dynamite for lack of paint: alex broner on “cities in motion”