Now this is a clear map!  It's by the Seattle area agency King County Metro.  First the legend: 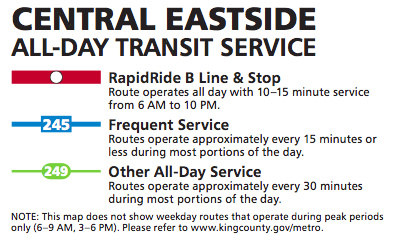 RapidRIde is King County Metro's new rapid bus product, with widely spaced stops, high frequency, special stations, but usually no exclusive lane.  Note how cleanly this legend distinguishes services that are useful for different purposes.  Note too that it omits peak-only commuter express services, because if they were present they would be lots of confusing overlapping lines that would make the basic network impossible to see.

So here's a piece the map.  Click to enlarge, but more important, go here (that's an order) to see the whole thing. 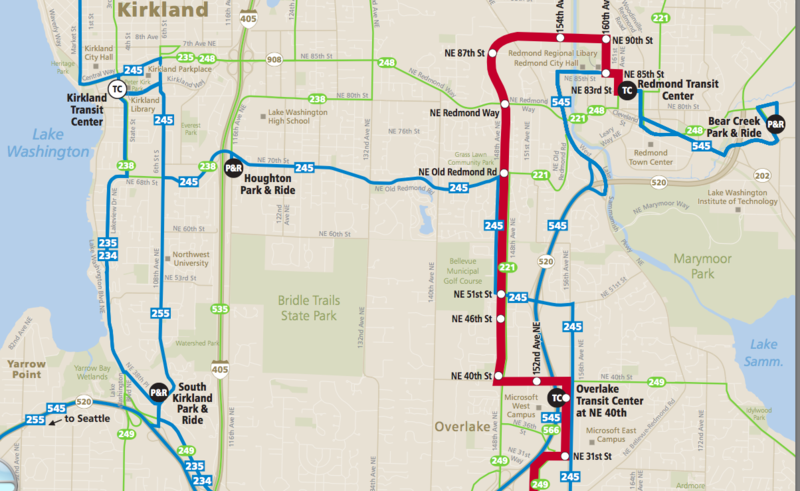 The distinctions on this map are entirely about what matters to the customer, especially the person who wants to see the all-day transit network that is ready to liberate your life, not just your commute.  Red means fast and frequent.  Blue means frequent.  Green means all day but not frequent.  And if you want to see peak commuter express services, which would obliterate the legibility of this map if they were included, see another map or individual timetable.

To be fair, many good maps do show peak only services and visually de-emphasise them as faint dashed lines.  That works too, but the key design principle is this:  The network of any particular layer in the hierarchy of service should be clear without being obscured by lower levels of service.  This map does that perfectly:  You can see just the red Rapid Ride line, or you can focus easily on red plus blue to see the frequent network, or you can notice the paler green and see the all-day network.  All in one map.

To get to this kind of customer-centered clarity, note what they had to omit:  Two transit agencies' services are presented here with no differentiation at all.  Bus routes numbered in the 500s belong to Sound Transit while the others belong to King County Metro.  Most multi-agency regions would focus on highlighting this distinction first, on the assumption that the customer's loyalty to a transit company is much more important than their desire to get where they're going.  The distinction should arguably be at least a footnote if you don't have integrated fares between the companies, as it could imply fare penalties and different fare media.

Some multi-agency maps do show all operators, but still visually distinguish them, as the Los Angeles Metro map does, for example.  But if you want a really simple map, reduce the transit company's identity to a footnote, or something that can be inferred from a route number*, or don't even show it at all.  Instead, show the customer what matters to them: frequency, speed, and duration of service.

*Can you spot the one place on the LAMetro map where they do that?  The answer is in "Joseph E"'s comment below.

using dynamite for lack of paint: alex broner on “cities in motion”
email of the month: grids on the brain