When a public transport network has grown cumulatively over decades, but has never been reviewed from the ground up, it can contain an enormous amount of waste.  Careful redesign is the key to unlocking that waste and generating vast new public transport mobility.  Our new plan for Auckland, New Zealand, now open for public comment, is a dramatic example of what can be achieved.  ("Our" because I led the intensive network design work, with a great team of planners from Auckland Transport and my colleagues from MRCagney.)

If you want to get around Auckland at any time of day, on a service that's coming soon, here's where you can go on today's network (or more precisely, a "business as usual" network extended to 2016) 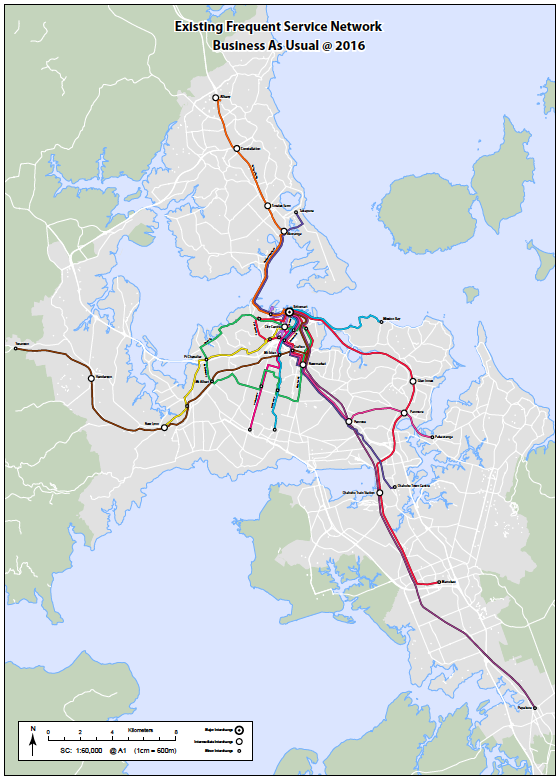 Under the proposed plan, which costs no more to operate than the existing one, here's where you'd be able to go, at any time of day, on service that's coming soon. 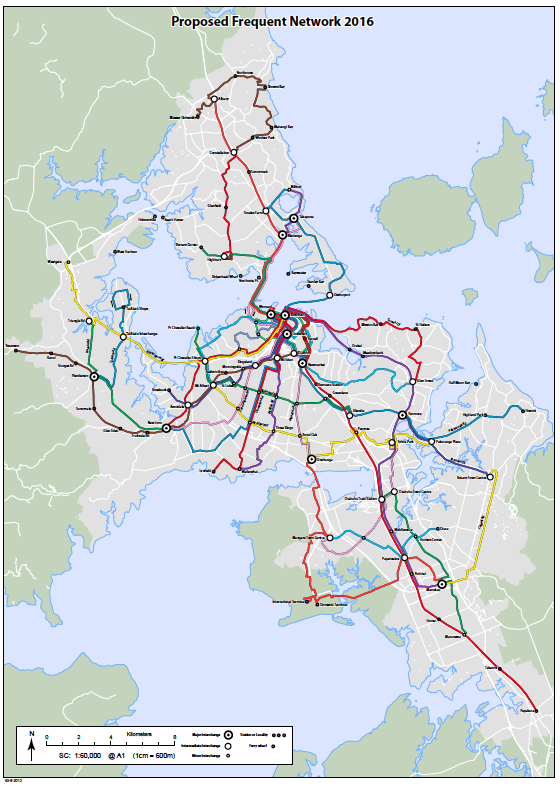 The network still includes coverage to all corners of the city that are covered now, and ensures plenty of capacity for peak commuters into the city.  But meanwhile, it defines an extensive network of high frequency services around which future urban growth can organize to ensure that over time, more and more of the city finds public transport convenient.

What's the catch?  Only the geometrically inevitable one: more people will have to make connections from one service to another, and the fare system will need to encourage rather than penalise that.

Whenever someone tells you that it's too expensive or hard to encourage people to make connections, ask them how expensive it is to run the only the first network above while spending enough money to run the second.  Networks that are designed to prevent transferring must run massive volumes of half-empty and quarter-empty buses and still have trouble delivering frequencies that make the service worth waiting for.  The waste involved can be colossal, as you can see from the amount of service we were able to redeploy in more useful ways with this redesign.

To see a bit of the structure clearer (and also because it's a cool graphic), here's the central slice of the drawing of the proposed frequent network, by my MRCagney colleague Nicolas Reid.  It's currently all over the media in Auckland, helping people assess the plan.  By streamlining it calls attention to the logic to the network — a logic that's sometimes easy to lose track of when following the details of every right and left.  Look at the whole thing. 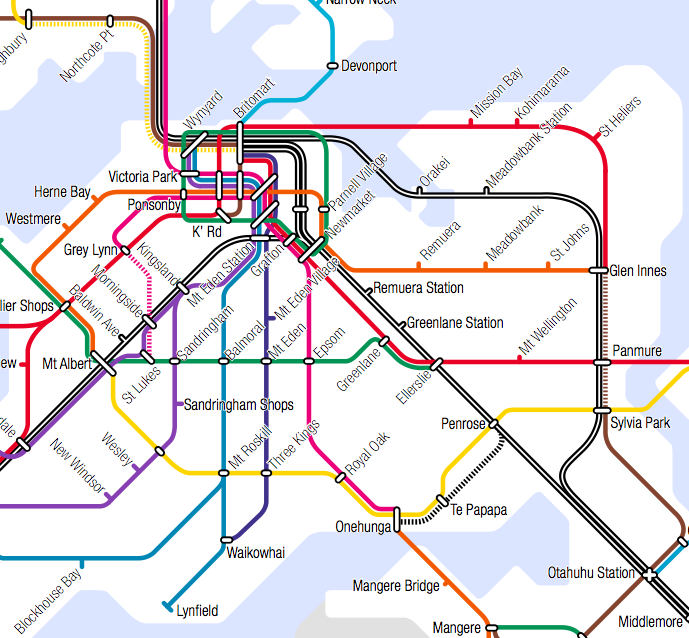 I'm very proud of what our team achieved working with the excellent folks at Auckland Transport, and I hope the plan will be further improved as a result of public feedback, as good plans always are.  But as Aucklanders begin discussing the plan, I hope they stay focused on the core question:  Are you willing to get off one vehicle and onto another, with a short wait at a civilised facility, if this is the key to vastly expanding your public transport network without raising its subsidy?

That is the real question before Auckland now.  The rest is details.

29 Responses to auckland: how network redesign can transform a city’s possibilities

You are here: Home › auckland: how network redesign can transform a city’s possibilities