Inner Link is one of four Auckland bus lines — all very frequent and designed to be useful for a wide range of trips — that have buses painted specifically for the purpose.  The other three are Outer Link (orange), City Link (red), and Northern Express (black).  In each case, the paint job is all about making it look easy to hop on.  Note that the bus assures you of the maximum fare you'll pay, and that the list of destinations along the top of the bus gives confidence about exactly where this bus will take you.  (For an Aucklander, these names are all familiar landmarks, so anyone can mentally string them together into a general sense of route.)

It's important, too, that this is one of Auckland's newer buses.  The big, clear windows are important.  In fact, if it weren't for the maddening bus wrap, this bus would be entirely transparent, so that you could see the people on board and even make out the city beyond it.  This bus arises from European designs that are intentionally gentle on the eye, and whose transparency starts to undermine complaints about a "wall of buses."

When I first saw the branding of these buses in Auckland, I found them irritating.  These buses were announcing simple, legible, frequent routes in a way that marketed them effectively enough, but did nothing to convey that they are part of a larger network of services designed to work together.  Of course, the reality of today's network in Auckland (unlike the one Auckland Transport has in the works) is that it is a confusing tangle of infrequent and overlapping services that is almost impossible to make clear.  [PDF] 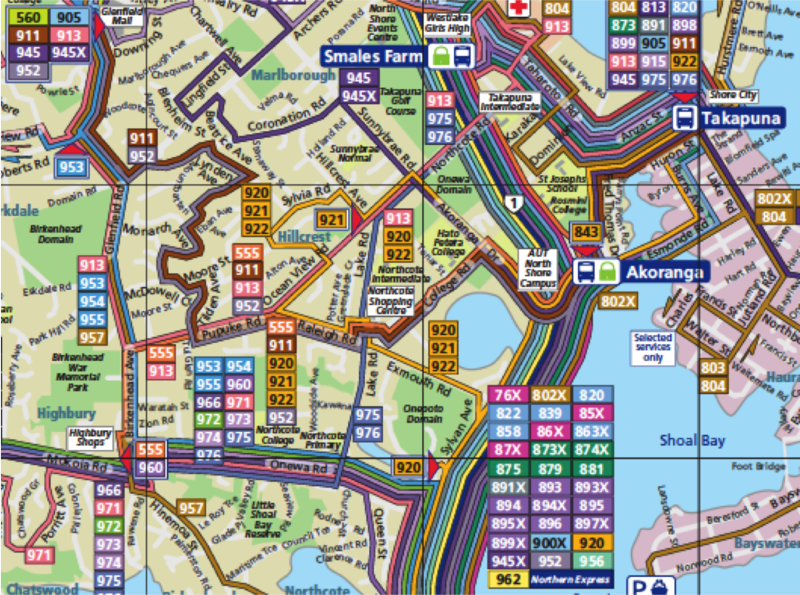 In the context of all that chaos, you needed these strong route-level brands like Inner Link to stand out as something useful.   And now that we plan to create over 20 bus routes that are as clear and legible as this one, the question arises, should we continue to brand them this way, each one separately, perhaps in a lively diversity of colors from goldenrod to teal?

Compare this to what Los Angeles Metro did, dividing its fleet of 1000+ buses mostly into just two colors, red for Rapid and orange for Local.  This has helped everyone see the faster Metro Rapid buses, but how much more might be achieved if you could paint a bus with both icons and information that would celebrate its role as, say, the Venice Blvd. Rapid?

The marketing and legibility question, of course is:  Would the diversity of looks (perhaps in the context of shared design elements that mean "Rapid") make the system look simpler or more complicated?  In Los Angeles I'm not sure.  In Auckland, where the system as a whole could hardly look more complicated than it does today, the call seems easier.

The issue for operations is the risk of fleet diversity.  In almost any transit agency, the operations folks will tell you they need maximum flexibility to deploy any bus on any route.  In some big-city agencies I've worked with, operating bases ("depots" in British) store buses in long stacks, where buses can be sent out only in the sequence that they came in the previous night.  Every new factor of fleet specialization becomes a new threat to getting the right bus on the right route every morning — an admittedly heroic effort if you've toured some of the grimmer, overcrowded facilities involved.

So a separate color for every route would be a non-starter in most of North America.  Yet if we designed operating bases so that you could access any bus, or even could just have much shorter stacks, it's not obviously outrageous.  For each route, you'd paint enough buses to run just 80-100% of the midday fleet requirement.  You'd never have more painted buses than you could use.  You'd also have a supply of generic buses that could be added to any route, either as replacements for buses in the shop or as supplemental peak service.  And you'd only do this for routes with high all-day frequency seven days a week and relatively little additional service added at peaks.

In certain contexts — especially in a case like Auckland where the whole city must learn a new story about the usefulness of buses — it might make sense.  Even if we end up with goldenrod and teal.

23 Responses to branding individual routes: too many colors, or the gold standard of legibility?

You are here: Home › branding individual routes: too many colors, or the gold standard of legibility?