Next time someone tells you that transit has to be rail in order to affect real estate demand, send them this paper [paywalled] by Elin Charles-Edwards, Martin Bell and Jonathan Corcoran –  a dramatic example of bus infrastructure profoundly transforming residential demand.

Our scene is the main campus of University of Queensland, which is located on a peninsula formed by a loop of the Brisbane River.  It's in the southwest corner of this image.  The area labeled "Brisbane" is the highrise downtown.  Most everything in between — which is mostly on the south side of the river — is dense, redevelopable inner city fabric. If you look closely you can see a single faint bridge connecting the University across the river.  This is the Eleanor Schonell Bridge, which opened in 2006, and which is solely for pedestrians, cyclists, and buses.  No private cars.  It's one of the developed world's most effective of examples of a transit path that is vastly straighter than the motorist's options.

Prior to the opening of the bridge, University of Queensland had a problem much like that of Vancouver's University of British Columbia.  Its peninsula setting helped it feel remote and serene (the rarefied air of academe and all that) but it was also brutally hard to get to, especially from places where students and lower-paid staff could afford to live.  While there are some affordable areas west of the campus, most of the immediate campus area is far too affluent and low-density to house the university's students or the bulk of its workforce.  So commutes to the campus were long and difficult.

Apart from the geography of income, the issue here was classic chokepoint geography, and that was the key to the transit opportunity.  Brisbane's looping river, and its extreme shortage of bridges outside of downtown, slices the city into a series of hard-to-access peninsulas.  Motorists are used to driving way out of direction to reach their destinations, and until recently, buses had to do the same thing.  The only transit that could do what cars couldn't was the river ferry system, CityCat, and while this system is immensely successful, it is still a small share of the travel market because (a) so much of the population is not on the river and (b) the river is a  circuitous travel path as well.

Charles-Edwards et al show how the bridge created an explosive expansion of access (where can I get to, soon?) for the campus by walking, cycling, and bus service.  Walking: 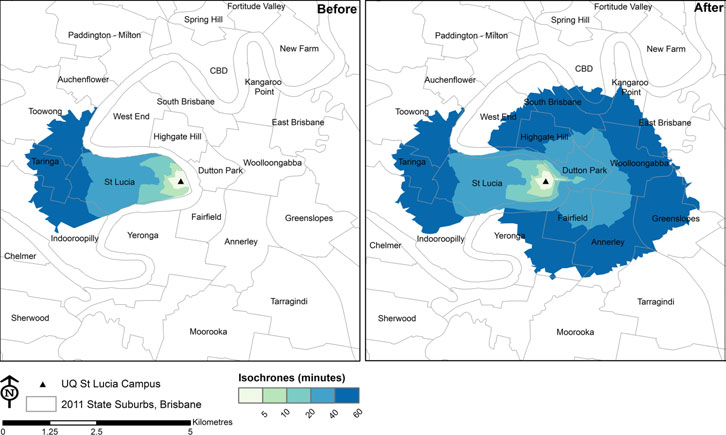 And by bus (focus on the triangle in the centre of the image, which is the campus): 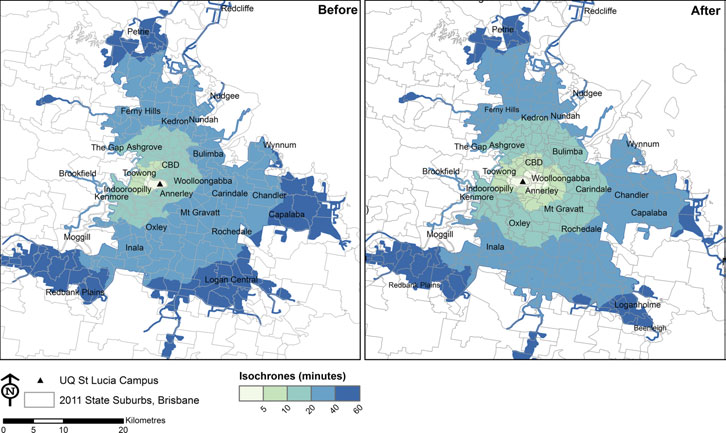 It's worth noticing why this bus bridge is so effective:  It plugs right into the Brisbane Busway network, which looks like this.  ("UQ Lakes" is the campus stop.) 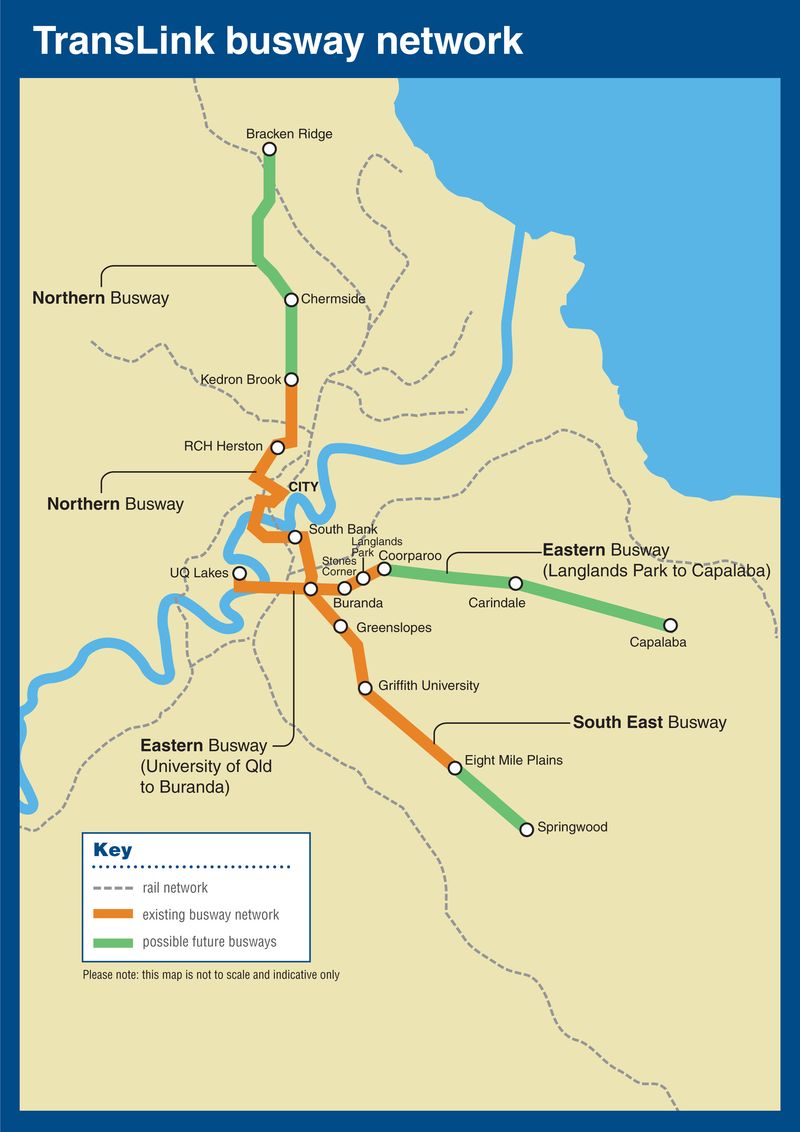 Direct buses from campus run along most of these paths, and connect to many other frequent services covering the area south of the river, including a couple of useful frequent rail lines extending southeast from downtown.   This is the biggest and highest-quality busway system in the developed world, in terms of the degree of protection from private car traffic along complete travel paths, including a tunnel under downtown.  So the access opened up by this bridge was extraordinary.  The busway is so fast and reliable that even commutes from northern Brisbane — on the same side of the river as the campus — were speeded up by the new bridge because they could remain in busway for the entire journey.

The effect on the location of students and staff, from 2003 until 2012 (six years after the bridge opened) looks like this. 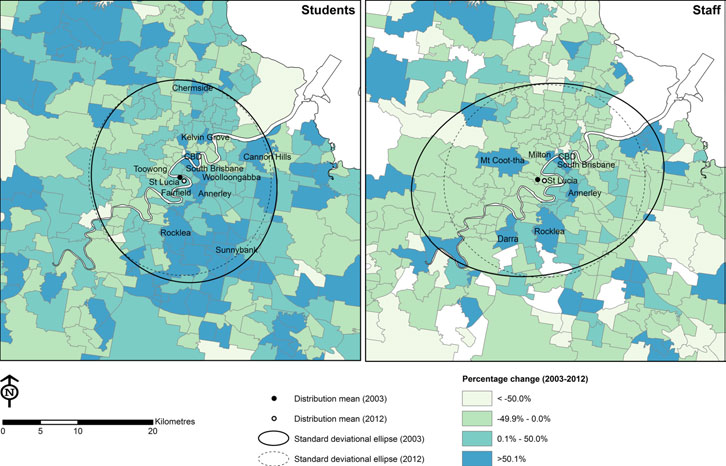 The colour choices are unfortunate, so pay attention to the legend and focus on "St Lucia" (the campus) and the inner city areas just across the river from it. Remember, too, that this is a map of percentage change, so don't be distracted by big colors far away from the action, which represent noise (percentage changes on a tiny base). You can see that students and staff have shifted in big numbers to the inner city across the river from the campus, but also to southern and eastern suburbs each of the river, which are more affordable and still easily reached by buses from the campus.  In the author's careful words, the bridge caused "a significant redistribution of staff and students across the metropolitan area."  It also had the likely effect of reducing overall commute times by enabling people to live much closer to the campus, though the authors don't mention that.

Because the project gave buses so much of an advantage in accessing the campus, the mode share shifted dramatically, enabling the campus itself to grow without choking on cars:

Between 2002 and 2011, the population accessing the campus increased by 23 per cent, … all of which were absorbed by [non-car modes on] the bridge. There was an accompanying shift in the modal mix of trips away from cars to public transport. This was most marked among students, for whom less than one-quarter of trips were by car in 2011, down from two-fifths in 2002. Bus patronage increased among students from around a quarter of trips to more than half. Staff car usage declined from 70 per cent in 2002 to just over half in 2011, with buses, cycling and walking all increasing in popularity.

Eleanor Schonell Bridge is a powerful example of infrastructure that transforms a city's living patterns by transforming the isochrones of access.  We can all think of trains and ferries that do this, but it's rare that buses are allowed to succeed in the same way.   Once again, Brisbane has shown that it's not the transit technology that matters to people's location choices.  It's where you can get to easily.

19 Responses to brisbane: a city transformed by a bus link

You are here: Home › brisbane: a city transformed by a bus link