The Driving Boom is over.

So argues the U.S. PIRG's Frontier Group think tank in a report released this week entitled "A New Direction: Our Changing Relationship with Driving and the Implications for America's Future" (follow the link for a download of the full document). From the end of the Second World War until sometime around 2004, both in terms of the total vehicle miles traveled (VMT) on US roads and in terms of VMT per capita, the distance driven by each person, increased every year by approximately 3%. The chart below displays this trend; the rapid increase beginning in 1946 peaks in 2004, and has begun to decline or level off. US PIRG, A New Direction: Our Changing Relationship with Driving and the Implications for America's Future


The PIRG report suggests a number of reasons for this emerging trend. Most obviously, fuel costs have increased dramatically since 2002 (more than doubling), and the recession and continued lagging economy have taken their toll on the ability of people to afford to travel by car.
But perhaps even more importantly, the mobility patterns of young Americans within the Millennial generation, here classified as people born between 1983 and 2000, are also changing:

Millennials are demonstrating significantly different lifestyle and transportation preferences than older generations. They drive less on average than previous generations of young people. More of them say they wish to live in cities and walkable neighborhoods. And more of them are drawn to forms of transportation other than driving. Moreover, the Millennials are the first generation whose lifestyles are shaped by the availability of mobile, Internet-connected technologies, social media, and the innovative forms of social connection, commerce and mobility that those technologies are spawning. 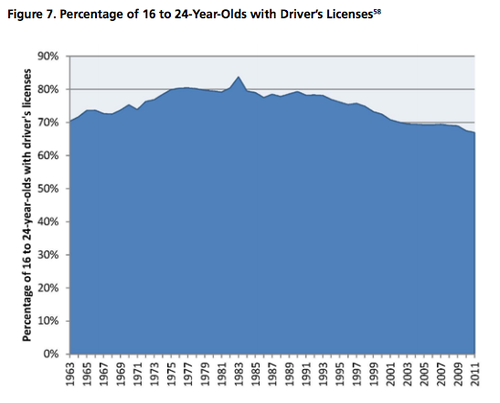 US PIRG, A New Direction: Our Changing Relationship with Driving and the Implications for America's Future


There are complex ripple effects of this trend: declining congestion and air pollution, but also reduced funds to pay for all sorts of transportation projects normally funded by gas tax revenues. Increasing fuel costs create an incentive for consumers to purchase more fuel efficient vehicles and for manufacturers to produce them, which reduces the size of this funding stream. Likewise, the mode shift powered by the increasing share of trips on transit, carsharing and cycling also contributes to an overall diminution of the gas tax.

The changes in travel behavior described in this study create both challenges and opportunities. The data now support a reconsideration of our priorities in transportation planning at all levels, but in the short term, funding to actually build the kind of infrastructure and operate the sorts of systems to capitalize on this trend is anything but secure.

streetcar in atlanta: cool, but is it useful?
google maps wants you to see all your transit options

23 Responses to the driving boom is over

You are here: Home › the driving boom is over