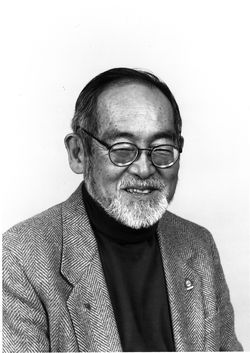 Roy Nakadegawa, a longtime San Francisco Bay Area transit advocate and board member for both AC Transit and BART, has passed away.  I remember him a soft-spoken but effective advocate who was able, as a professional engineer, to dig into details when they mattered.

I also remember him as someone who really understood transit networks, and considered them more important than transit technologies.  You can get a taste of that from this 2008 kerfuffle (concerning a debate that I am agnostic on, personally).

Former AC Transit and BART director Roy Nakadegawa passed
away last Friday morning, August 23, 2013, at his home in Berkeley.
Mr. Nakadegawa had been suffering from congestive heart failure for some time.

Mr. Nakadegawa served on the AC Transit Board for 20 years,
from 1972 to 1992.  He then served on the BART Board for 12 years from
1992 to 2004.  After he left the BART Board, he joined the Board of TRANSDEF
(Transportation Solutions Defense and Education Fund), a non-profit
environmental organization created by transit activists to advocate for better
solutions to transportation, land use and air quality problems in the San
Francisco Bay Area.  In all those positions he argued for cost-effective,
mobility improving transit.

Mr. Nakadegawa was an active attendee and participant in TRB
(Transportation Research Board) meetings and was well known and respected
around the world for his depth of knowledge about transit and its relation to
land use.  He was written up in the local press for the frugality of his
travel arrangements.  When Mr. Nakadegawa served on the AC Transit Board
of Directors, its members got an annuity when they left the Board.  For
many years, Mr. Nakadegawa generously donated his annuity payments to buy
prizes for AC Transit's local bus rodeo winners.

As a BART Director he consistently advocated for cost
effective transit administration, which spilled over into his own
campaigns.  In his re-election materials
for BART Director he was proud to point out that in November 2000, he garnered
the highest vote (over 91,000 voters) of five previous BART races and spent
less than a penny per vote.  Mr.
Nakadegawa tirelessly urged his fellow board members to consider innovative
uses of BART facilities as a non-traditional source of
revenue and improved customer access, resulting in the adoption of both
permanent and experimental parking program initiatives.

He will also be
remembered for his role in advocating BART’s Earthquake Safety Program.  He helped to raise public awareness of this
critical program, resulting in the successful 2004 passage of a bond measure to
fund it.

Professionally, Mr. Nakadegawa had been a transportation
engineer for the City of Richmond and for many years served on the Board that
administers the civil engineering exam in California.  His career as a public sector engineer
reached a pinnacle in 1989 when he was elected National President of the Institute
for Transportation of American Public Works Association and later served as its
liaison to the American Public Transportation Association (APTA), the national
transportation advocacy group.  While
with BART Mr. Nakadegawa became an active member of APTA, serving on several
committees including its Policy and Planning; Advanced Technology, Governing
Board; and Transit Management and Performance committees.

Mr. Nakadegawa and his wife Judy were the quintessential
Berkeley couple, dedicated to peace, family, public service and folk dancing.

The Geometric Shapes of Transit’s Success
shutting down new york? think of the kittens