In my work for transit agencies, I'm always insisting that reports should not just explain how routes perform (typically in ridership per unit of cost) but also why.

Here's one partial example from an infographic developed by TransLink, the transit agency in Vancouver, Canada. 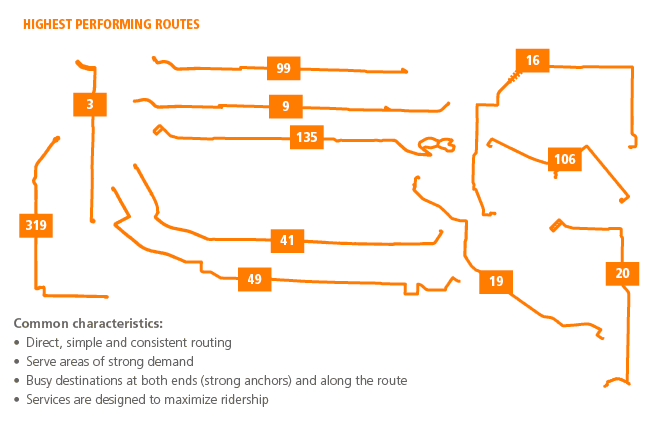 All other things being equal, long, straight routes perform better than short, squiggly and looping ones.  The reasons are obvious to most transit riders (and are laid out in detail in Chapters 4 and 14 of my book) but you'd be amazed how many well-intentioned people  haven't figured this out, and continue to advocate land use patterns that make effective transit impossible.  (Mantra:  It's not Transit-Oriented Development unless it's oriented toward transit that can succeed.)

Now, TransLink can use this in their explanation whenever someone demands that a route should squiggle to serve their interests.

A core of my own practice is in developing ways to build understanding of the causes of transit's success, so if your transit agency is struggling to explain productivity, put them in touch with me!

23 Responses to the geometric shapes of transit’s success

You are here: Home › the geometric shapes of transit’s success