Over the last 15 years, the Internet and mobile communications technologies have transformed the way Americans live and work. During that same period, growth in [motor] vehicle travel slowed and then stopped, with Americans today driving about as much on average as we did in 1996.

USPIRG has a new report out today, focused on how network technology has ushered in new possibilities for Americans’ personal mobility. Modern communications are beginning to alter the types of trips people need to make, as more and more people work remotely for at least a portion of their working hours. The mobile, high-speed, GPS devices that a majority now own are absolutely necessary to the cellphone trip planners and various -sharing systems that have spread to many US cities in recent years.

This is one of the most compelling arguments for why we should expect America’s declining interest in cars to be permanent.

The “decline of cars” story is a hard one to convey to the currently ruling generation (now in their 40s-70s).  Older folks too easily assume that Millennial disinterest in cars has something to do with being young and single and childless and maybe poor.

We already knew that Americans are getting drivers licenses later and later in life — and this statistic ought to get attention because it’s comparing Millennial behavior to that of their parents at the same age.

The strongest story, though, presents not just a trend but an explanation of it, and that’s what we have here.  Communications technology explains why the younger generation is finding cars less necessary (and why older people who are good at technological uptake are finding the same thing).  People still need to be together (see Yahoo’s recent decision to abolish telecommuting) but communication technology is replacing a lot of errands that the older generation is used to doing with cars. 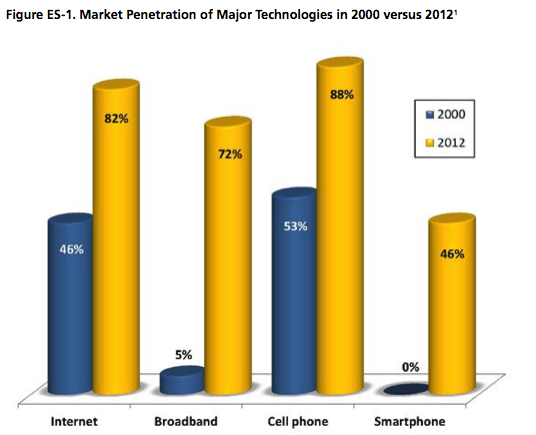 USPIRG reviews a broad array of recent research on the topic, concluding:

By providing more
choices and flexibility for individuals to meet their transportation needs,
these new tools can make it convenient to adopt “carfree” and “car-light”
lifestyles.

Households that reduce
the number of vehicles they own often dramatically reduce the number of miles
they drive. Because many of the costs of owning a car are perceived to be
fixed, vehicle owners perceive the cost of driving an additional mile to be
artificially low. New services such as carsharing shift the cost of driving
from fixed to per-mile costs, providing an incentive for users to drive less
and allowing many households to reduce their overall spending on
transportation.

Information technologies make it easier to ensure seamless connections between various modes of transportation, expanding the number and types of trips that can be
completed effectively without a car.

The report also discusses mobile ticketing, perception of travel time, and each of the various sorts of sharing services, and provides a set of policy recommendations to respond to and build upon the potential of this technology. Read it yourself here.

what does a bus driver look like?
frequent network maps: the challenge of one-way pairs

16 Responses to why are americans driving less? better communication options!

You are here: Home › why are americans driving less? better communication options!