One-way splits — where the two directions of travel are on different streets — are often the scourge of transit: on the map, for example, they appear to cover more area than two way service, but actually serve less.  And they certainly make transit maps confusing:

Still, they're frequently mandated by one-way traffic couplets.  Those, in turn, are usually mandated by the goal of flushing traffic through a city, though there are cases, notably Portland, where one-way couplets are perfect for creating an intimate and walkable downtown.

Transit agencies may not be able to avoid one-way couplets, but they can control how they describe them and think about them.  WMATA (and its map designer, CHK America, have made a major step in their new network map.  We covered the development of this mpa previously. Here's what it looks like today: 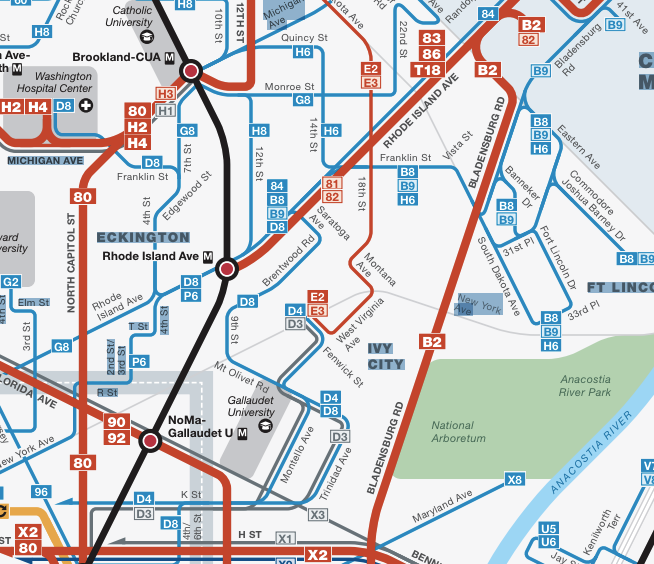 Red represents the most frequent bus lines, blue the infrequent ones, and black the DC Metro system. Other colors are used to depict services of other transit agencies. This basic, clear symbolization quickly communicates the relative importance and usefulness of each type of service.

Marc Szarkowski, who contributed his own frequent network map of Baltimore to the blog last week, asks: how do we show a single route that runs as a two-way couplet on separate streets, without introducing too much clutter or confusion?

I think they can work if presented effectively, but overall I often find them confusing, especially if I'm taking an unfamiliar route to an unfamiliar area (all the more you have to remember, particularly if you take multiple such routes). For example, whenever I ride a bus to an unfamiliar area, I tend to assume that the stop I get off at in one direction is just as good for boarding in the other direction. It's frustrating to return to the stop just to discover that you have to walk a block over (or sometimes more: see the 10 in West Baltimore!) to catch the same route in the other direction. 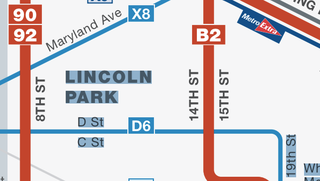 WMATA's map uses one line to show both branches of route, and labels either side with the couplet streets. This effectively reduces the amount of clutter on the map, but also excludes which direction the bus travels on each street. This information is less crucial in the case of the B2 shown left, where no other routes travel on the same pair of streets, but where multiple routes use the same streets, in different patters towards different destinations, combining paired one-way streets can become very confusing. Marc's map does not employ this method of simplification for the same reason:

In Baltimore's case multiple overlapping routes were sometimes offset across a series of three or more one-way streets; i.e. Route 1 up on street A and down on B, Route 2 down on B and up on C, Route 3 up on C and down on D, and so on

Ultimately, desiging this type of a map is about balancing information density and comprehensibility. The user needs to know that line B2 runs on both 14th and 15th streets, but for a map at citywide scale, it may be more important to communicate that B2 is a frequent line serving a long, straight corridor on the eastern side of the city. The map already distorts direction and the exact shape of the streets in favor of a simpler visual effect. WMATA's map uses the same approach to one-way street pairs, downplaying accuracy in favor of ease of use.

7 Responses to frequent network maps: the challenge of one-way pairs

You are here: Home › frequent network maps: the challenge of one-way pairs