The "tea party" US House members who currently dominate the news are unlikely allies of urbanists.  But on one core idea, a band of urbanist thinkers are starting to echo a key idea of the radical right:   Big and active national government may not be the answer. 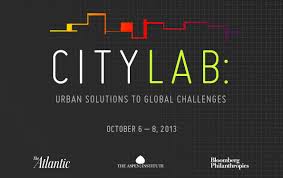 Last week, I was honored to be invited to Citylab, a two-day gathering in New York City sponsored by the Aspen Institute, the Atlantic magazine, and Bloomberg Philanthropies.  The event featured mayors and civic policy leaders from both North America and overseas as well as leading academics, journalists, and consultants.

I expected the thrilling mix of new ideas, compelling stories, and quirky characters, but I got one thing I didn't expect:  A full-throated demand, from several surprising voices, for an urbanist revolt against the power of national governments.

Al Gore said it with his trademark fusion of bluntness and erudition: "The nation-state," he said, "is becoming disintermediated."  If you're not an academic at heart, that means: "National governments are becoming irrelevant to urban policy, and hence to the economy of an urban century."

On cue, the New York Times published an op-ed on "The End of the Nation-State," about how cities are leaving nations behind.  Citylab also featured a terrific interview with political scientist Benjamin Barber, whose new book If Mayors Ruled the World argues for the irrelevance of nation-states in a world where cities are the real levers of economic power.  (According to Barber, the full title of his book should have been:  If Mayors Ruled the World: Why They Should and How They Already Do.)  When I spoke with Barber later, looking for nuance, he was full-throated in ridiculing the US Federal role in urbanism.   On this view, all the well-intentioned money that the Federal government doles out for urban goodies should be spent by cities as they see fit, or perhaps (gasp) never sent to Washington at all.

Follow this logic and you might arrive at a radical urban Federalism, perhaps even one that could meet tea-party demands to "Abolish the IRS!"   Pay taxes to your city or state, and let them send a bit of it on to central government to do the few things that only a central government can do.  Push power downward to the scale where problems can be solved.

You might even separate urban from rural governance in a way that enables both to thrive, each at its proper scale, replacing the eternal struggle between these necessary opposites that makes today's political discourse so inane.  The "size of government" debate is just a pointless and eternal struggle between urban and rural experience, both of which are right.  Living in cities means relying on government for many things that the rural resident provides for herself, so of course the attitude toward government is different.   But what's really logically different is the role of local government. Both urban and rural experience provide good reason to be suspicious of big-yet-distant national government, which can be as unresponsive to big-city mayors as it is to a Wyoming county official who just needs to get a bridge fixed.

At most of the urbanist and transportation conferences that I attend, though, any shrinking the national government role is met with horror.  And that's understandable.

In the US, the prevailing local response to declining federal spending is outrage and redoubled advocacy.  In Australia or Canada, two countries I work in extensively, working urbanists and infrastructure advocates seem to agree that of course there must be a bigger central government role in everything, with the US often cited as the model.  In the US itself, it's easy to see the current cuts in Federal spending as a disaster for urbanism and infrastructure.  It is, but it could also be something else: an invitation to governments that are closer to the people to have their own conversations that lead to local consensus about funding and solutions.

If mayors do end up ruling the world, it will be because the city, unlike the state or nation, is where citizenship is mostly deeply felt.   A nation's problems are abstract; if they show up in your life you're more likely to think of them as your community's or city's problems.  And that, in short, is why the city may be best positioned to actually build consensus around solving problems, including consensus about raising and spending money.

Before urbanists join the tea partiers in trying to shrink the national government, they have to grapple with the problem of inequality.  As sites of concentrated opportunity, cities are attracting the poor as well as the rich, and are thus becoming the place where inequality is most painfully evident.  But no mayor can be expected to solve a problem that exists on such a scale.

In small-c conservative terms, of course, the problem is not income inequality but rather the declining credibility of a "ladder of opportunity" that convinces everyone that reasonable effort will improve their circumstances.  One reason to care about transit, walking, and cycling — for many points on the income spectrum — is that transportation can form such a formidable barrier to opportunity.

All through Citylab, hands were wrung about inequality and the need to Do Something about it, against the backdrop of a New York City mayoral election that is mostly about this issue.  A rent control debate, featuring New York City Planning Director Amanda Burden and economist Paul Romer, found no middle ground on the question of whether city policy can usefully intervene to help low income people.  Income inequality appeared to be one issue where cities can do little by themselves.

When I asked sociologist Richard Florida about this in the North American context, he pointed me to an article proposing that the US create a Department of Cities.  He has good ideas about how to keep this from being just another bureaucracy, but if income inequality is the big issue that only national policy can address, it's not clear that it should be tagged as an urban issue at all.  Cities are not where the problems are.  Cities are just where people see their society's problems most intensely in daily life, because they get out of their cars.

The great city in the wealthy parts of the world cannot just be an enclave of success.  It will deserve the self-government that the mayors seek only if it relentlessly inspires, supports, and gives back to its suburban and rural hinterland, creating its own "ladder of opportunity" for access to the riches of urban life.  Only a few people can afford Manhattan or San Francsico, so those cities' money and expertise must focus not just on themselves but on making life in more affordable places incrementally more humane.  Turning Newark into Manhattan would just make it unaffordable, so some of the urgency must lie in less photogenic intervention that works for each place's price-point.  It lies in providing safe places to walk and cycle, and  a safe way to cross the street at every bus stop, even in landscapes of drive-through everything that will be what many people can afford, and what some prefer.

That's why I'm happy to be working not just in San Francisco but also in Houston, where affordability is a leading selling point.   It's why I'm suspicious of transit planning that defines an elite "choice rider" as the only important customer, including much of the transit-aestheticism that comes out of urbanist academia.  Where are the prestigious awards for the best affordable, scalable, but nonsexy intervention that made low-income inner-ring suburbia more safe and functional?  How do we build not just the shining city behind a moat (San Francisco, Manhattan, Singapore) but a chain of humane and functional places, at every price-point, that combine safety, civility and opportunity?

Where is the money in that?    If mayors ruled the world, I hope that would be obvious.  So let's hope they already do.

frequent network maps: the challenge of one-way pairs
are smartphones changing the geography of our cities?

17 Responses to time for an urbanist “tea party”? the citylab conversations

You are here: Home › time for an urbanist “tea party”? the citylab conversations