So you're on a crowded subway train on Santiago's Line 4, the dark blue line on this map.  You're northbound, approaching the end of the line at Tobalaba station. 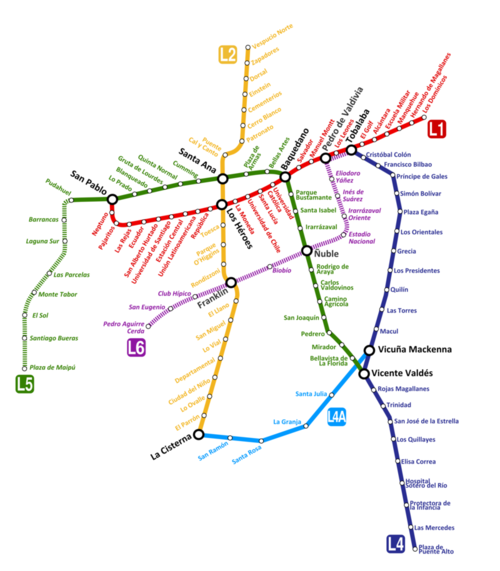 Everyone on the crowded train will get off at once.  Most customers are changing to an intersecting line 1, which has  side platforms on the level above.  That, means you can't exit the platform at just any stairwell; each of the two stairwells goes to just one direction of the connecting line.

So customers tend to collide as they exit the train trying to get to the correct stairwell for their preferred direction, creating massive platform congestion that slows people's exit from the train.  this increases the dwell times of the train and thus reduces the possible frequency, which in turn only makes the trains even more crowded.

Massive infrastructure solutions were proposed.  My friend Juan Carlos Muñoz, a professor of engineering at the Catholic University of Chile, came up with a simpler solution (Spanish with English subtitles):

A gate blocking the platform halfway along it forces people to exit at the door nearest to them, which in turn teaches people to be in the correct part of the train for their preferred connection. People who try to exit the wrong exit are stopped at the staffed gate, and let through last only after the crowd has cleared. These people are irritated, and a few write to their elected officials, but most people just learn how it works, and work with it.

UPDATED: Shouldn't people have figured out anyway what part of the train to be in to be close to their exit?  No, becuase in this case, there's an exit at the front end of the platform and another in the middle.  Juan-Carlos explains:

There is one set of stairs coinciding with the middle of the train. Let´s call them A.

Only 40% of the passengers in this train wants to take these stairs.

However, a great place inside the train to take stairs A is in the back of the front half of the train. Indeed every train used to have around 120 (out of a total of around 1500) such passengers taking such a strategic position. You can see them in the video! These are the passengers causing the problem, not only because they cause the counterflow but because they force some passengers wanting to take the B stairs to enter the back half of the train. The gate forces to act otherwise leaving some room for more B passengers into the front half. They can now exit the station much faster.

So this was a "tragedy of the commons" problem.  People optimizing for their own outcomes were in conflict with the most efficient way to get everyone out of the station before the next train arrived.

Note how Juan-Carlos refers to the "greatest good." The implication is that we can't let a few people's anger get in the way of solving the problem in a cost-effective way.

should we cut fares or increase service? an advocacy parable
holiday map immersion

12 Responses to santiago: a low-tech approach to fast exits from a subway station

You are here: Home › santiago: a low-tech approach to fast exits from a subway station