If you respect Portland as a leader when it comes to transit and sustainable urbanism, you should be interested in what its citizens think, not just what its spokespeople and marketers say.  It's the citizens who've demanded most of Portland's most dramatic transformations, and they who have to signal when it's time to take the next step.

So here's what citizens of Portland think about how the city should prioritize its transportation investments, from a statistically valid phone survey (cellphones included) with a margin of error just under 5%. 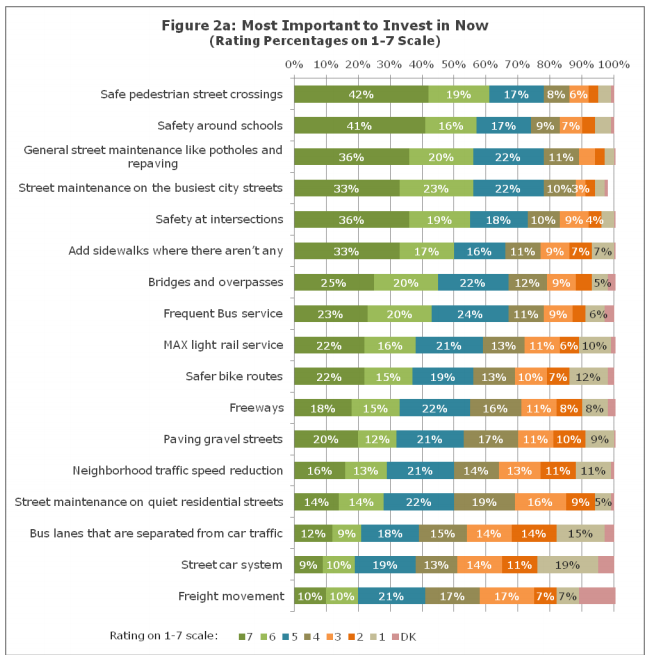 Possible investments were ranked on a 1-7 scale where 7 (counter-intuitively) means the highest priority and 1 the lowest.  Dark green on this chart means users chose 7, the highest priority, while light green means 6, blue means 5 etc.   The brown is 4, which means netural, and the red and gray colors  at the right are low priorities.  Click to enlarge and sharpen.  Original report is here and PowerPoint here.

Responses to frequent bus and MAX service may be lower than actual because some respondents could have presumed that the survey was solely about things that the City of Portland controls, and transit supply isn't one of them.

On the other hand, there's not much patience for parochialism on the part of Portland's city government.

People are increasingly seeing the services of regional agencies as something that the City of Portland may need to act on.  Given the list of improvements discussed above, and their relative importance, this response is probably heavily about Portland's relationship to TriMet, the regional agency that controls transit service. (It may also be about the relationship to Oregon's DOT, which still controls some major arterials.)

So for example, it's plausible that transit advocates who are in the 20% that oppose city involvement in "things it doesn't own" would not mention bus and light rail service as City of Portland priorities, even though they support them as investment priorities in general.  Support for these things may thus be even higher than indicated.

So to sum up (and some of this will be more surprising to Portland-admirers than to Portlanders):

This is actually a very practical view, the only one that ultimately works with transit's underlying math.  Core cities have higher per capita transit demands than their suburbs [see Chapter 10 of my book Human Transit] so they always tend to be underserved — relative to demand — by regional transit agencies that aim for some concept of "regional equity."  In many cases, the only solution is for core city voters to step up and vote, for themselves, the additional service that only they know that they need.  This doesn't have to mean breaking up the regional agency, but it does mean giving up on the idea that any service distribution formula that a suburb-dominated region would agree on will meet the core city's expectations for transit, based on the core city's economy and values.

Am I concerned about the low ranking of bus lanes?  Not really surprised.  We would have to get our frequency back (many major Portland bus lines run less frequently than they did in 1982) and put ridership growth back on track.  Then that question would naturally arise in its own time.

There are other interesting nuggets in this survey.  Portlanders' overwhelming obession with pedestrian safety is heartening, especially since this is a crucial transit improvement.  (This may also signal a shared concern for East Portland, the disadvantaged "inner ring suburbia" within city limits that has poor pedestrian infrastructure, inadequate transit frequency, and most of the city's pedestrian fatalities.)  Portland cycling advocates, and their national admirers, may be disappointed in the ranking of "safe bike routes."  Sadly, cycling is polarizing here as it is everywhere.  Although 55% give some priority to "safer bike routes" and cycling is the only mode whose share of work trips is clearly growing, opposition and disinterest are also higher on cycling than for the main transit service investments.

But when it comes to transit, there are some clear signals here, not just for Portland but for any city that hopes to replicate its achievements.

*This question should have been more specific.  The response says "MAX light rail service" which could mean either geographic expansion or more frequency.  The frequencies on MAX have been cut substantially in the last five years, so at least some of this response is probably about frequency.

could dead houseplants save the world? (quote of the week)
job: part time entry level transit analyst at our firm

11 Responses to portland: the citizens’ priorities for transportation

You are here: Home › portland: the citizens’ priorities for transportation