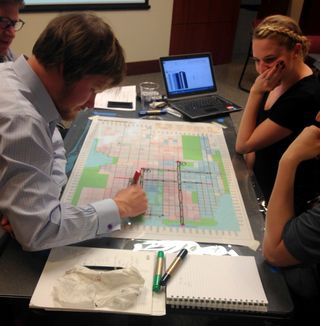 I'm writing this while our Interactive Course in Transit Network Design in Seattle goes on around me.  About 25 people are huddled around maps having intensely animated conversations about what the best possible transit network would look like.  Now and then someone comes up and asks a (good) question.

This kind of workshop is not just "inexcusably fun," as one student called it, but it's also the best way to get a practical grasp of the transit tool.  If you've actually tried designing a transit network, you have some knowledge of the material in your hands, not just in your head, and hand-knowledge is easier for the mind to trust and integrate.  Hand-knowledge (also called body knowledge) is knowledge you trust without even having to think about it.  It's the very essence of what we perceive as obvious.

The biggest problem facing urban transportation in North America is that most influential people have hand-knowledge of driving cars but only brain knowledge of other transportation options, if that.  Hand-knowledge is so powerful in us that it governs the metaphors and assumptions we bring to other topics.  When people ask me why transit isn't serving their labyrinthine business park, or ask why it can't run smaller buses that fit better into their neighborhood, or why it can't run sexier vehicles with nicer seating, they're assuming that transit is just like cars, only bigger.  And until you've taken some time to play with what transit really is, that's a compelling delusion and therefore a consequential one for policymaking.

A lot of experienced transit riders do have this kind of knowledge, though you also have to be able to separate what's convenient for you from what makes a good network for the city.  (The public outreach for the Houston System Reimagining asked people both "Is this better for you?" and "Is this better for Houston?" to try to prompt both kinds of thinking.).  Many existing transit riders aren't able to make that distinction, but those who can become powerful advocates and leaders.

Hands-on workshops are also the essence of my firm's approach to all forms of outreach, not just formally educational activities like this course.  A key part of all of our planning projects is the stakeholder workshop, where key leaders from a city sit down and do network planning exercises together.  At first it seems amazing that such busy people are willing to take the time to do this, but on reflection it's less so.  Great leaders know they don't know everything, and are eager for fun ways to expand their hand-knowledge.

The other great frontier, of course, lies in web-based tools that let people have some of this experience at home.  Explicit games that involve designing transit networks are either wildly simplifed (Mini Metro) or arcane (Cities in Motion) or massively misleading (Sim City).  (I've heard good things about Cities:Skylines but don't have the supercomputer needed to run it smoothly.)  What's needed is something less graphically complex that still helps people explore the essences.

But of course games don't have to call themselves games.  Transitmix is an excellent and fast-developing tool for sketching and costing transit networks.  As it adds features that measure outcomes, it takes on the features of a game:  It's a space where you can try out different transit plans, see the results, and gradually figure out what kinds of network work best.  This is one of the most effective kinds of learning, because the result is hand-knowledge.

Hand-knowledge doesn't always make you an explainer, of course.  I've met many transit planning professionals who have great instincts but can't describe their thought process. So we work back and forth between hand-knowledge and brain-knowledge.  Feel how this substance works in your hands, but then spend a little time thinking more about what you've learned from that. Get your brain and your hand on the same page.  Then you're ready to change the world, or at least figure out the real transit issues in your community.

4 Responses to Knowing it in your hands

You are here: Home › Knowing it in your hands