In just about every North American regional transit debate I’ve ever been involved in, someone has said:  “Why is all this money being spent on transit downtown!  Downtown already has lots of transit, while out here in ___, we have nothing!”

If this is a debate within a city — often between city councilors who represent districts — then they’ll say this about downtown, and sometimes about dense inner neighborhoods around it.  But exactly the same debate happens at another scale: among municipal governments in a huge urban region; in that case, they’ll complain about the entire dense, old, transit-oriented city at the region’s center.   In either case, I’ll use the term core to mean the older, denser, inner area in this debate, and edge to refer to the newer, less dense, more car-dependent area.

Edge:  “The core area has so much transit, and we have little or nothing, but we pay taxes too, so why does so much of the money go to the core?  Also, we’re trying to build denser development in more transit-oriented ways, to start moving beyond car-dependence, but how can we do that without good transit?  We’re desperate out here!”

Core:  “It’s great that you want to be denser, but we’re already very dense.  That means a much bigger share of our residents need or want transit, and our ability to grow and thrive depends on it.  Car-dependence just isn’t an option at our density, so if transit doesn’t work, our city doesn’t work.   We’re desperate in here!”

I sympathize with all sides, and do my best to warn all sides away from this kind of parochial polarization.  Nothing is sadder than coming into a city or region with inadequate transit, and finding that the locals are more interested in blaming and resenting each other than in working on a problem they all share.

Once more with feeling: Transit is a network, which means that its parts are interdependent.  You cannot think about it the way you think about libraries or fire stations, where putting one in a certain place mainly benefits the people there, because the whole network affects everyone’s ability to get everywhere.  So when folks argue that the another part of the network should be weaker so that theirs can be stronger, they’re actually undermining their own transit service.

In North America, the edge tends to have the votes to win edge-core debates, so it’s not surprising that many North American transit networks are weak at the core.   When you look at North American rapid transit systems, you often notice pieces missing in the middle.  Metro Vancouver is one of the most dramatic cases.  Look at what happens at the west end of the yellow line: 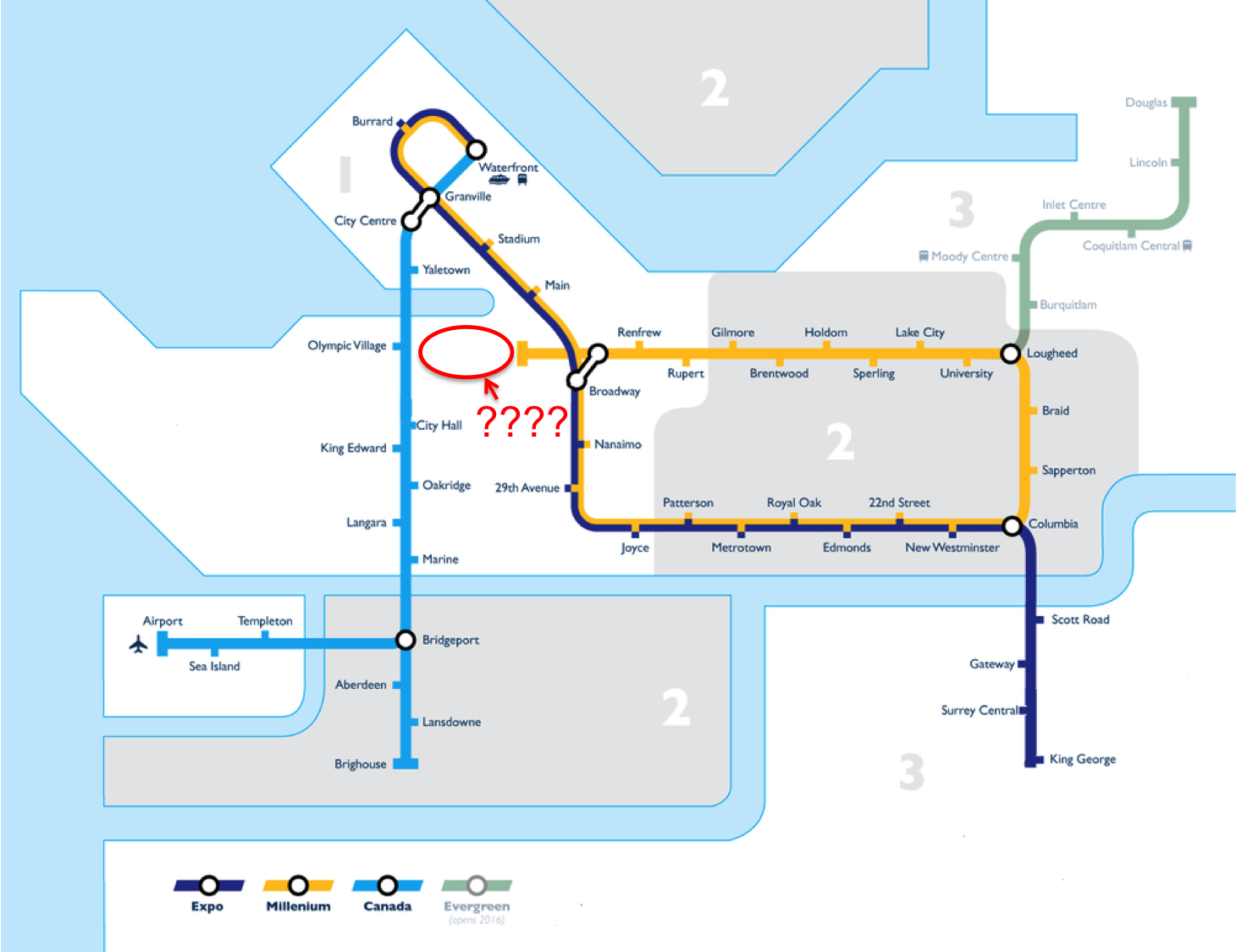 It never ever makes sense for a major rapid transit line to end just short of where it would connect with another major line, as the yellow line does here.  This gap creates all kinds of overloading problems, as three suburban branches from the east all feed into a single line into downtown (the northward peninsula).  It obstructs many cross-regional trips, most obviously from the eastern suburbs to the airport (on the island in the lower left).   Finally, the bus line that crosses this gap is one of the busiest in North America, the best signal of all that you need a rail line.  Yet if you listened to the regional transit debate, you’d think that plugging this gap in the whole region’s network is a project “for Vancouver” just because the gap itself happens to be in Vancouver.

Once you learn to recognize it, you’ll see this theme in city after city.  Missing links like Vancouver’s are an extreme example.  More common is a persistent disinvestment in the core parts of a network even though people from the whole region rely on those parts.  Many big city transit networks end up massively overcrowded and failing at the center even as the political pressure is all about extending further toward the edge.

Fortunately, a few North American regions are showing real leadership and progress on this:

Finally, why have I said “North American” throughout this post?  Because most other wealthy countries I’ve worked in or studied don’t have this issue to the same degree.  Mostly this is because those countries have located regional transit planning at a level of government that has the power to see and act on a citywide vision, and account for all of its consequences.  Typically, this power is integrated with the other great powers that act on that scale, such as land use planning, infrastructure, and so on, so that the implications of each action can be accounted for.

Good planning can still happen in a more fragmented political context, though, so long as someone has the power and skill to make the argument for a complete network vision.  Fortunately, this is happening more and more.

The Chinese Straddle Bus is Back
Jobs: Transit Planners in Auckland and Brisbane

45 Responses to Core vs. Edge Debates in Public Transit

You are here: Home › Core vs. Edge Debates in Public Transit