Last week’s trip to Barrow, Alaska — with a stop at Deadhorse — was not a business trip.  We weren’t looking for transit, or even really for a town.  We were looking for landscapes, plants, birds, indigenous art, an unfamiliar sea, and of course latitude.

Still, on news that I was going, a prominent figure in the microtransit world tweeted me this:

So with him in mind, I snapped this pic at the Iñupiat Cultural Centre.  A small bus with several riders arrived and dropped off a man, who went into the adjacent library. Barrow’s a small town (<5000) and this is a typical small-town transit bus — except for the lack of markings, which doesn’t surprise me.  Barrow is a largely indigenous community with locally-oriented problem-solving networks that aren’t going to be visible to an outsider, and there’s no reason they should be.

It was my only sighting of that bus all day, not that I was looking for it.  Mostly, people get around Barrow in pickup trucks, SUVs, and deafening little ATVs.   Not much on two wheels.  And people walk.

Like many Alaskan towns, including the capital, Barrow has no connections to the larger road network.  It might as well be an island.  Owning a car, then, lacks one of its main attractions — you can’t “hit the open road.”.  Here, the roads don’t go out of town.  In a car, you’re as trapped in town as you’d be as a pedestrian.

Well, one road ended at a lake, but it had a surprising amount of traffic, as though everyone who wanted to get out of town had only that one place to go.  And you can drive to Point Barrow, but only if that track to the left, in very deep wet sand, looks safe to you.  We were wimps. To be fair, being trapped in town is a summer problem, because what surrounds the town then is either open ocean or bog-like tundra, the latter hard to walk across.  The winter freeze expands Barrow’s horizons, as both ocean and tundra become hard surfaces, easier to explore.

It is an interesting town, especially when you consider that absolutely everything you see got here on a boat or an airplane.  It’s on stilts, as it’s built on permafrost that turns into bogs in the summer.  Mostly wood, although the nearest tree is several hundred miles away.  And mostly not trying to impress us, which is fine. 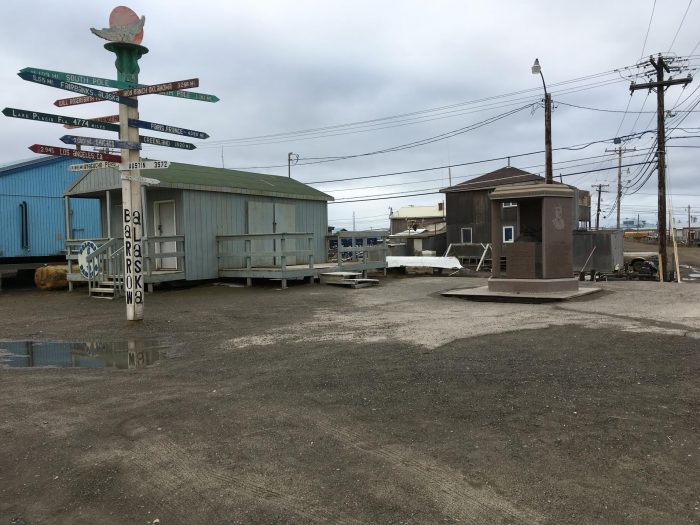 On the Limits of Ridesourcing and Microtransit PR: the Video
Portland’s Division Transit Project: A New Kind of “Rapid” Urban Bus

3 Responses to Barrow, Since You Asked

You are here: Home › Barrow, Since You Asked