Earlier this year, the Moscow Department of Transportation asked us to help rethink the bus network in the innermost part of the city, an area about 3 km in radius centered on Red Square and the Kremlin.   The first phase of this project just went into operation, so this is a good time to share some of the details of why and how a bus network redesign of this magnitude happens.

Our work was a lively collaboration with DoT staff, local consultants at Mobility in Chain (MIC) and the excellent Moscow-based geographic analysts at Urbica.  As with our recent work in Yekaterinburg, I worked with local experts and DoT staff in an intensive multi-day workshop to hammer out the ideas.  We also helped with some of the analysis and storytelling, and developed the main ideas of the map designs shown here.

You may be thinking: “Moscow has an extensive, highly useful Metro network. Is surface transit even a big deal?”  Yes.  Even in Paris, with the world’s densest metro network, an intensive subway system doesn’t eliminate the need for an excellent and celebrated surface transit network.  Compared to Paris, Moscow stations are spaced more widely, and they are also famously deep, which means longer walks and escalator rides. It takes at least five minutes to move between the surface and a metro platform, or between one platform and another in a transfer station.  And if you’re making a 10-15 minute trip within the core, five minutes is a very long time. Together, these factors make trips using surface modes attractive, provided that the bus and tram network is designed to take people to where they need to go.

Let’s get oriented.  Of all the world’s major cities, Moscow comes closest to being an absolutely regular spiderweb or polar grid.  Major corridors are either concentric circles or straight radial links between these circles.  This is true of the whole urban region, but for now let’s zoom into the center: From inside to outside, we have: 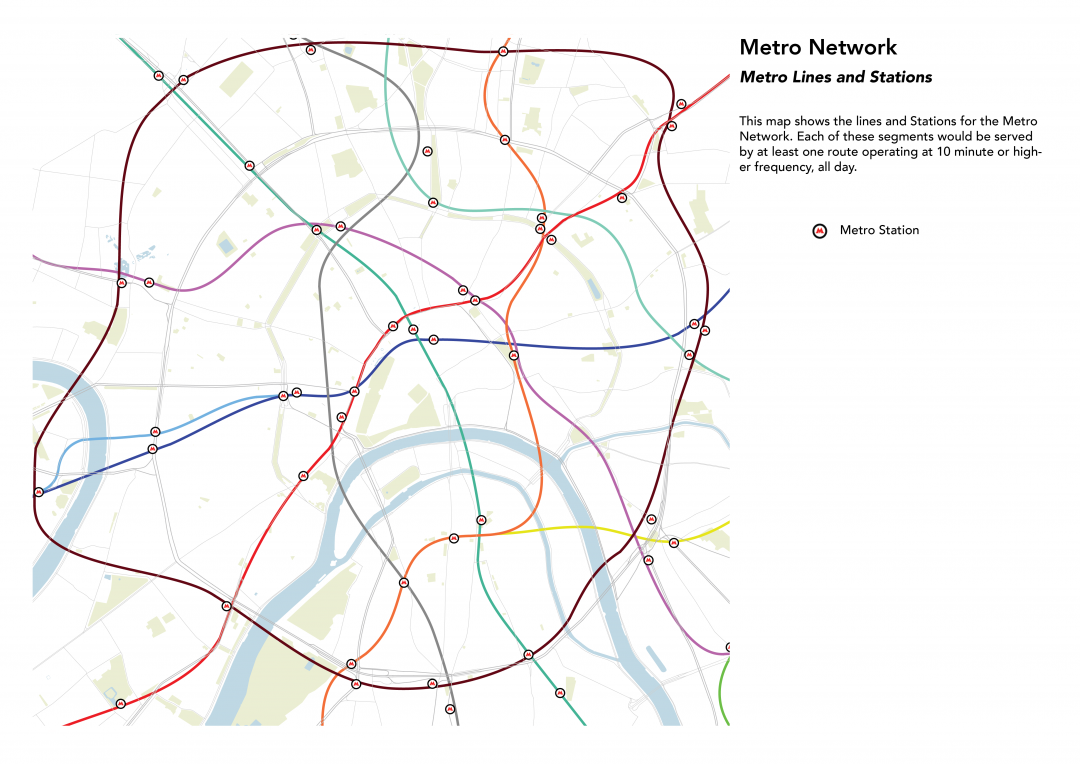 And here’s the bus network as it was until Saturday, October 8.  (Download the fullsize PNG for more detail.)  Wide lines in hot colors mean very high frequency.  The black line is a frequent tram. 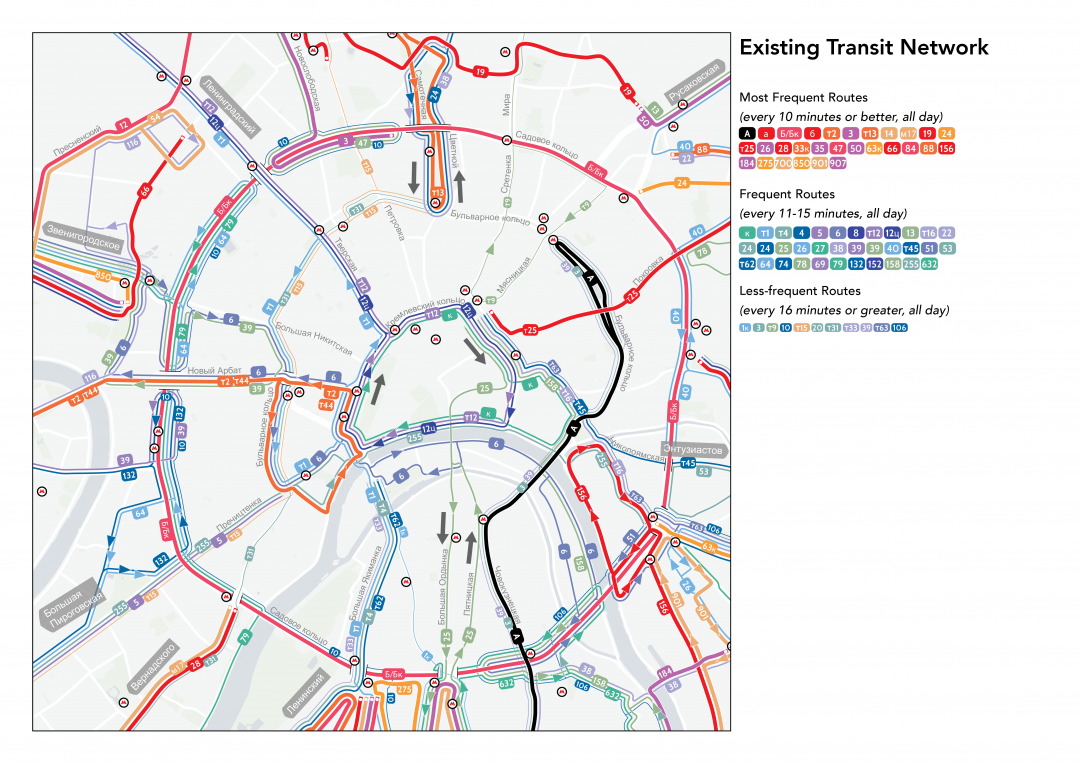 If you look closely you’ll notice several problems, apart from the staggering complexity.  They all arise from the design of major streets.

In its structure, inner Moscow is a mostly 19th century European city — reminiscent in many ways of Paris, Vienna, or Prague.  It’s beautiful and very walkable, except for the major arterial streets.  This is an old photo of the Garden Ring, and most of the ring still looks like this. 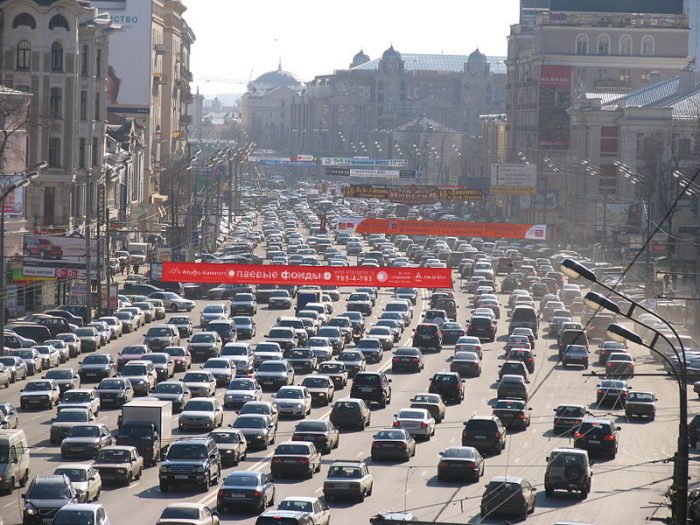 Garden Ring on the NW side. Old photo but typical of how most of the street looks today. Photo by https://commons.wikimedia.org/wiki/User:Strober

For years Moscow expanded and redesigned its major streets with the sole objective of moving as much car traffic as possible, at as high a speed as possible.  (It’s routine to see cars going 80 km/hr [50 mi/hr] or more on these streets.)  This goal of car traffic flow caused several decisions to be made that were bad for surface transit. 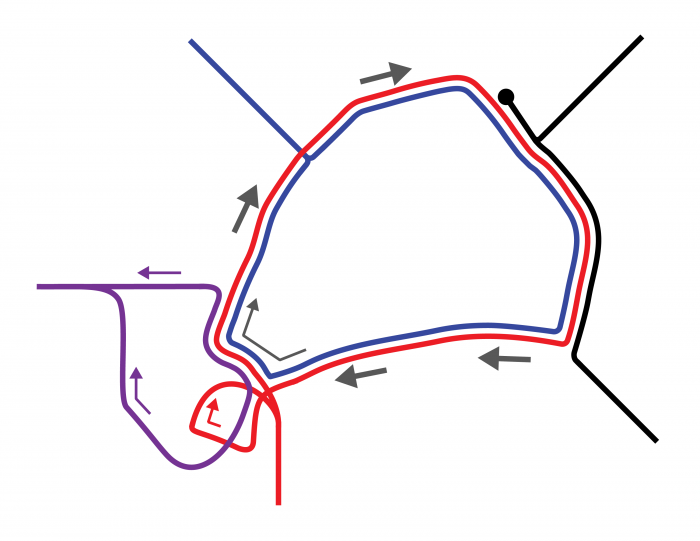 Fortunately, the Kremlin Ring has just been fixed.  A continuous bus lane has been built allowing buses to run two-way across all parts of the Ring.  Various limited-turn and forced-turn problems are also being solved through infrastructure projects, over the next few years.  (Even the Garden Ring is starting to be civilized, with help from our colleagues at Mobility in Chain.)

This changes everything, and allows for a totally new network that will be vastly more useful.

The new network, implemented on Saturday, October 8, looks like this.  For greater detail, download the file here. At this early stage, most lines that could be connected across the core haven’t been connected yet.  Note the dark blue line from southwest to northeast, which is the only new one.  But the network has been reorganized so that it all flows two-way through the core of Moscow, serving the same places in both directions.  This is already a huge improvement.  Note the vast increase in the number of wide lines — meaning very high frequency.  (They are all colors in this map but only hot colors in the existing system map above.)

As always when you’re trying to expand liberty and opportunity for most people, the result is fewer routes running more frequently in simpler, straighter, two-way patterns.

And That’s Not All …

We got to this network by first designing a network for 2018, then backing up to identify the things we could implement immediately.  That means there’s more to come:  The next phase combines these routes into more patterns that run right across the city.  That means even more frequent and direct routes, even simpler routings, even better access across this dense and diverse urban core, all while reducing the actual volume of buses along the Kremlin Ring and vastly reducing the number of buses that need to park there at the end of the line.  We look forward to being able to show those maps soon!

You are here: Home › Moscow: Reinventing Surface Transit in a European Urban Core