In last year’s “microtransit week” series, I challenged the widely promoted notion that “new” flexible transit models, where the route of a vehicle varies according to who requests it, are transforming the nature of transit, and that transit agencies should be focusing a lot of energy on figuring out how to use these exciting tools. In this piece, I address a more practical question:  In what cases, and for what purposes, should flexible transit be considered as part of a transit network?

For clickbait purposes I used “microtransit” in the headline, but now that I have your attention I’ll use flexible transit, since it seems to be the most descriptive and least misleading term.  Flexible transit means any transit service where the route varies according to who requests it.  As such it’s the opposite of fixed transit or fixed routes.  But the common terms demand responsive transit, on-demand transit and “microtransit” mean the same thing.

This article is specifically about flexible transit offered as part of a publicly-funded transit network.  There may be all kinds of private-sector markets — paid for by institutions or by riders at market-rate fares — which are not my subject here.  The question here is what kind of service taxpayers should pay for.

As I reviewed in the series, the mathematical and historical facts are that:

All transit agencies must balance the competing goals of ridership and coverage.  Coverage means “providing access to transit regardless of whether many people use it.” A typical measurement of coverage is “___% of population is within ___ distance of transit service.”  Coverage goals arise from popular principles such as “leave nobody behind,” “be there for people who need us,” and “provide a ‘fair share’ of service in every city or electoral district.”  They are important goals to many people, but they tend to conflict with ridership goals, because they require running lots of service that has no hope of every being highly productive in ridership terms.  (For a fuller explanation of this critical concept, see here.)

To provide clear direction to planning, we always encourage transit agencies to form a clear policy on how much of their resources should be set aside for service whose goal is a high coverage, not high ridership.

Once you have decided to invest some of your resources in coverage service, and know that ridership is not the point, flexible service may have a role.  That’s because if your goal is take credit for bringing transit close to many homes, it’s sometimes more efficient to do that without actually near every home every hour.

In a great deal of American suburban development, you’ll find things like this: This series of peninsulas and islands on the south edge of Savannah, Georgia is covered with very low-density residential development, in which entire neighborhoods are effectively cul-de-sacs.  A fixed route that tried to cover this area would have to go out each peninsula, turn around, and come back. In fact, there’s a bus route that tries to do that. 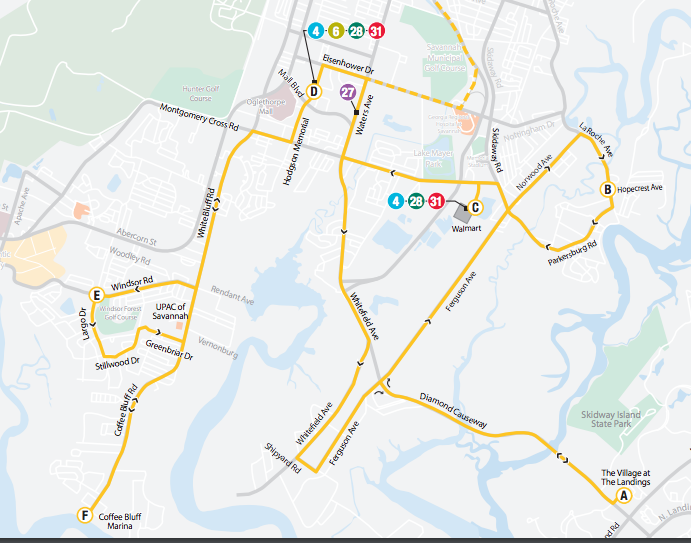 It’s a rare example of a route who’s ridership is so low that flexible service might do better, and it’s not hard to see why.  Few people would be willing to ride through all these loops.

A flexible service could service this area with fewer driver hours.  To do this, it would allow enough time to go to perhaps half of the peninsulas in each hour, but would take credit for covering all of them.  That way, it would provide the lifeline transit access that is coverage service’s goal.  If enough people lived in landscapes like this, then this tool could help an agency satisfy a target like “90% of residents are within 1/2 mile of service.”

Flexible service isn’t always the right coverage tool.  There are many areas where density is too low to attract ridership, but where the street network puts most homes and destinations within a reasonable walk of through-streets.  Fixed routes can cover those areas quite efficiently, even when meeting a coverage goal.  But flexible services do have a place in the coverage toolbox.

However, contrary to almost all “microtransit” marketing, ridership is the death of flexible service.  Suppose that a flexible service on these peninsulas was so attractive that many people began calling it.  Then the flexible route van would be expected to go to every peninsula every hour, which is impossible. So more vans would have to be added, still at a very high cost/rider.  This process would devour the limited coverage budgets of most agencies, and if those agencies haven’t established a clear limit on what they’ll spend on coverage service, this process can start threatening high-ridership service.  At that point, someone should ask: If you end up deleting a bus carrying 30 people/hour so that you can run a van for 3 people/hour, aren’t you basically telling 27 people/hour to buy cars?

So attracting many riders to flexible services is the last thing a transit agency should want to do.  In fact, when flexible services become too popular, they have to be turned back into fixed routes.  Imagine that a flexible service covering the area above got so popular that you needed three vans to run it.  At that point you might as well just run a separate fixed route for each peninsula, at which point each one could be reasonably straight.  Still, though, three buses may be more than this particular area deserves, when you look at the total budget for coverage services and spread it over the whole region.  So if you really want to claim that you’ve covered all of these peninsulas, you want flexible service, but you also want to take every possible step to keep ridership down.

For this reason, too, flexible transit must avoid being more convenient than fixed routes.  It may need to have a higher fare, and it certainly shouldn’t offer service “to your door.” If the goal is coverage to areas where fixed routes don’t work, like these Savannah peninsulas, then you should provide the same quality of service that fixed routes do, which is to say, service to a point within a short walk of your house. This keeps the van out of cul-de-sacs and gravel roads, allows it follow a somewhat straighter path, and thus allows it cover more area in an hour, which is the whole point.

So most discussion of flexible services or “microtransit” is missing the point.  The Eno Foundation report, for example, went to great length to sound optimistic about pilots that were achieving three passengers per service hour – a worse-than-dismal performance by fixed route standards.  Flexible service will never be justifiable if the goal is ridership, because if ridership were the goal you wouldn’t serve places like these low-density peninsulas at all. Only if the goal is coverage do these services ever make sense, so only in that context does flexible service appear as a possible solution.

Unfortunately, plenty of “microtransit” marketing is still sowing confusion about this.  Transloc promises to “solve the frequency-coverage dilemma,”[1] which is dangerous nonsense.  “Microtransit” is a kind of coverage service, not a way to avoid having to think about how much service to devote to coverage goals.

Flexible service will never compete with fixed route on ridership grounds, so it should stop pretending that it can.  Market the service as what it is.  It’s one tool for providing lifeline access to hard-to-serve areas, where availability, not ridership, is the point.

[1] Transloc page https://transloc.com/microtransit-ondemand-software/ as of August 28, 2019.

22 Responses to What is “Microtransit” For?

You are here: Home › What is “Microtransit” For?