Posted on May 25, 2011 in Cincinnati, Frequent Networks, Maps

Frequent Network maps, which show you the transit network that's useful if you're not willing to wait long, have been a good idea for a long time, but it takes a while for ideas to move through bureaucracies in even the most competent and well-intentioned transit agency.  So bravo to the agencies that now produce these maps in some form, including those in Los Angeles, Minneapolis, Adelaide, and Montréal.1

Fortunately, you don't have to wait for the transit agency to do it.  Today anyone can create, promote, and perhaps even sell their own maps, and now people are doing it.  A few had already gone down this path, like Brent Palmer in Brisbane and Steve Boland in San Francisco.  But my post on this topic seems to have started (or at least encouraged) a barrage of local innovation in cities all over North America and Australia.  Within weeks I had a feast of map samples and ideas from Seattle, Vancouver, Melbourne, Columbus, and many others.  The most beautiful of them was certainly Anton Dubreau's map for Montréal, but all showed interesting ideas on how you could attack the problem.  They ranged, for example, from artistic hand-drawings to automated outputs (Los Angeles by Routefriend, Chicago by Jeff Wegerson) that could update automatically.

Back in January, Nathan Wessel of Cincinnati contact me to share an early draft of his proposed Frequent Network Map for that city.  He had done this on his own, initially for fun.  But since then, floodgates of opportunity have opened.  Here's his story from an email to me. 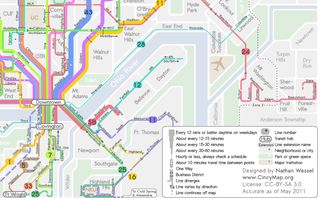 I thought you'd be interested to see how this all turned out.

The final version of the map is here: http://cincimap.org/CincinnatiTransitMap.pdf

A blog post on the launch event for the map at the Contemporary Arts Center:
http://5chw4r7z.blogspot.com/2011/05/cincinnati-transit-map-launch.html

I spoke to about 100 people came out for the event, including a board member from the transit agency and two city council candidates. Lots of designers, young folk, and activists.

I managed to print 30,000 maps with the money I raised and will add about 500 posters!:
http://www.kickstarter.com/projects/1057319855/a-frequent-transit-guide-for-cincinnati/posts

About 5,000 have been distributed so far-to the library system, a transit agency and the people at the event and who donated.

The main transit agency has acknowledged on their website that their map is inaccurate (they hadn't before!): http://www.go-metro.com/maps.html  And they are looking into paying me to make a map that includes all of their routes with park and ride locations.

And Cincinnati's largest university, the University of Cincinnati is printing 6,000 of their own maps for next year's freshmen class. Right now I am distributing maps to orgs and businesses with customers who ought to be riding the bus and being clear that if they want more, they'll have to(and can) print their own.

I even inspired someone in Dallas to do a similar project with their downtown pedestrian tunnels:
http://www.kickstarter.com/projects/dfwcre8tive/designing-a-map-for-the-dallas-pedestrian-network

Anyway, I wanted to share all this with you because your blog gave me the idea to start this project, and I want you to know you're helping to start good things 🙂

Moral:  Don't wait for your transit agency to take the initiative!  In our distributed and wired world, initiative can come from anyone, and that means you!

1 Portland's TriMet was an early leader in this trend, but budget cuts have forced them to undermine the meaning of "frequent" to the point that Portland would be misleading as an example.

The Frequent Network mapping campaign continues. Here's a Cincinnati map by Nathan Wessel, which can be compared to the agency's full map here. It reveals an intensely radial system, with not many chances to connect other than downtown.  (Click pic to enlarge, or download sharper PNG file here. 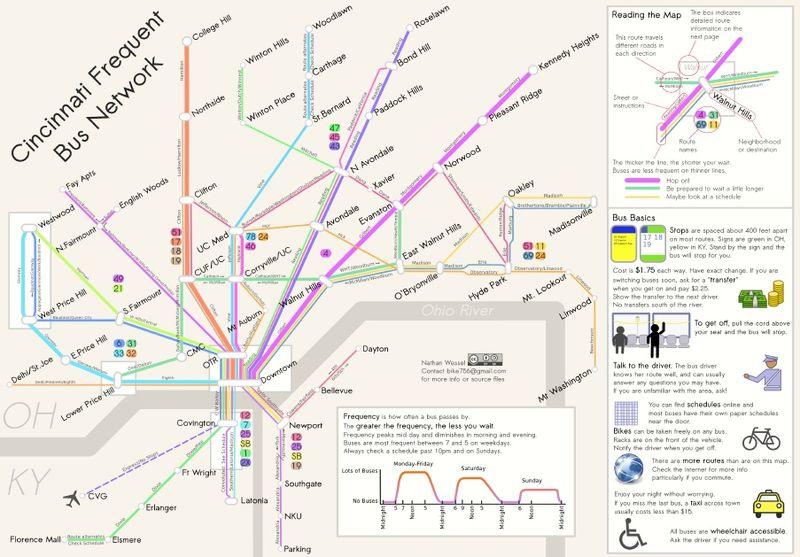 You are here: Home › Cincinnati