Posted on July 17, 2012 in Frequent Networks, Maps, Tel Aviv
Alan Tanaman is a transit planning enthusiast who is working to help redefine the perception of public transport in Israel as a service to be used by everyone. Alan was an advisor on transport policy for the Israeli Labour Party during their 1998 election campaign, and more recently has been assisting the Israeli Public Transport Passengers Organisation (an NGO). He is also one of the moderators on the Tapuz Public Transport forum, but his primary interest is in trying to make transit more simple to understand and use.

This blog was the prime motivator for my attempt to produce a frequent-network map for the Tel Aviv Metropolitan region. The area lacks a rapid transit system, but the slack is generally taken up by a fairly frequent bus system, albeit lacking in priority measures. Although frequent, the network has grown sporadically and without method, and it was decided in 2004 that a complete overhaul of the network was needed, one that would be based on free transfers.

Only in July 2011 did the first major reorganisation phase take place, but it was shrouded in secrecy until about 10 days before the change. Once the change did take place, there was mass confusion. Suffice to say that the information was insufficient and the implementation was poor.

People resented having to make changes, but in this case the change was poorly explained; the benefits of the new system with high-frequency core sections were unclear. It is incredible that one of the missing pieces was a complete network map. The government website www.busline.co.il included only individual line maps along with maps of individual areas. But if you wanted to get from one end of the city to the other, it was pretty difficult to work out the best way to do so.

I wondered if some of Jarrett Walker’s principles would work – was there a clear network of high-frequency lines running all day? During that month, curiosity got the better of me, and I put together a map of the highest frequency routes. These were to be called ‘fork routes’: Routes with a high-frequency trunk, forking out into two or three branches at each end. I also added a few of the other high-frequency routes and published the map on a public transport forum. The reaction was very positive, but the network coverage was sparse, so I was urged to add lower frequency routes.

At this point I decided that the map was going to become a mission to produce a complete network map, excluding only the very lowest frequency routes. This seemed impossible – the network is so complex and there are far too many line numbers to fit. Worse still, the agency was now backtracking on some of the changes that had simplified the network, and had announced that it would bring back some cancelled routes, and revert some to their old meandering ways.

But by combining two bus mapping systems, often known as French and Classic, it could be done. The French system uses coloured lines for each route, whereas the Classic (or British) system marks route numbers along the streets. By using coloured lines for groups of high-frequency routes and marking the rest of the numbers along the streets in black, everything fitted in, and the high-frequency routes were still clear enough to follow.

The first network map was released on 23rd August. You can see this archive map in Hebrew at http://telaviv.busmappa.com/p/blog-page_22.html.  Here is a slice: 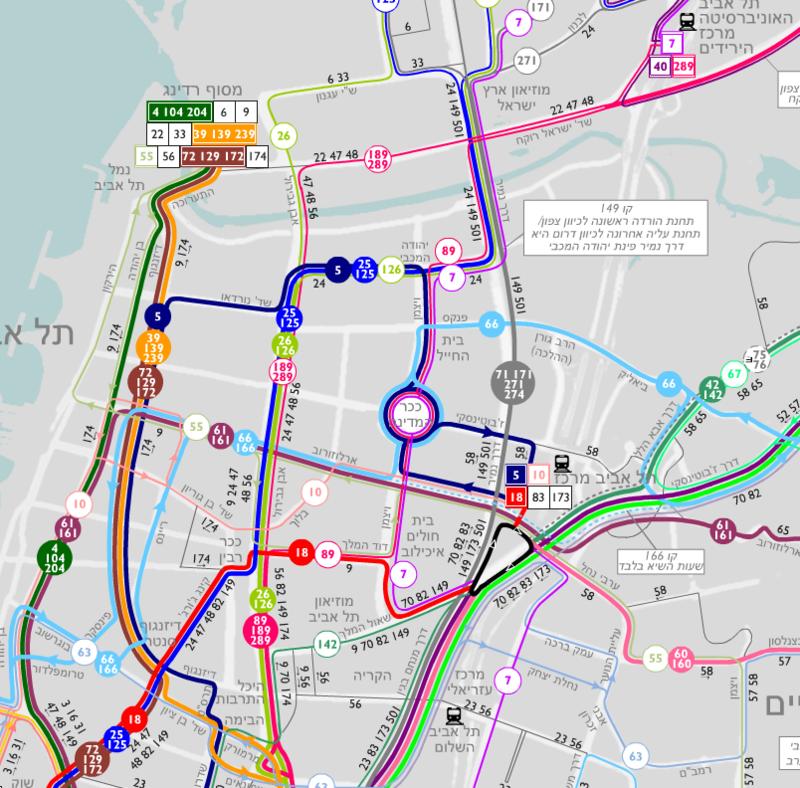 For the final map, in English map see here:  Here is a slice of it. 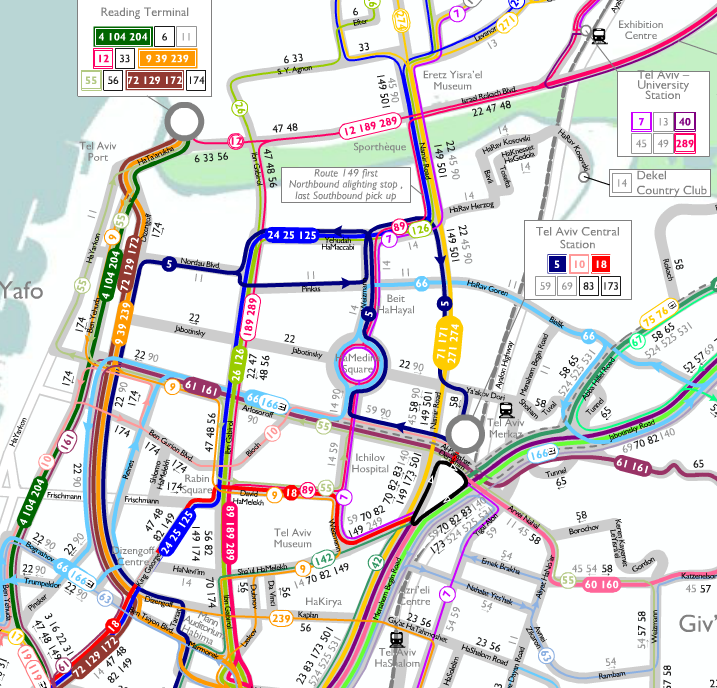 In the final English version, I also decided to incorporate some high-frequency commuter lines, but only when they were similar to the coloured lines that were already on the map. For example, route 166, which branches off route 66 at its eastern end, and also runs slightly differently for a short portion within Tel Aviv. Unfortunately, this does have the effect of making the all-day frequent network rather less clear.

You are here: Home › Tel Aviv