Hello from Brisbane, the capital of Australia’s state of Queensland. I thought I’d offer some quick views of the city’s underground station at King George Square. 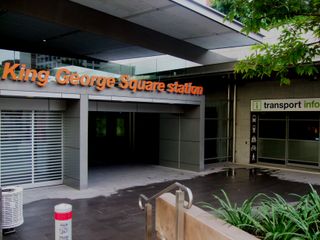 The station lies under what will be a central square for Brisbane, similar in function to Pioneer Courthouse Square in Portland.  The station exit gives this view of Brisbane’s iconic town hall; the construction works for the square are just to the left. 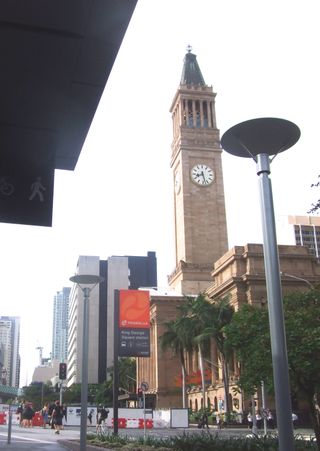 There’s a generous mezzanine with information displays and a bit of public art.  The art is based on local newspapers from World War II, advising Brisbanites of “Rules for Air Raids.” 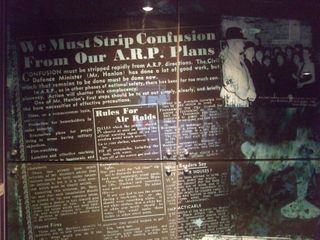 The architecture features a series of planes meeting at odd angles, vaguely reminiscent of Melbourne’s Federation Square.  These also have the effect of opening the station entrances toward the sun. 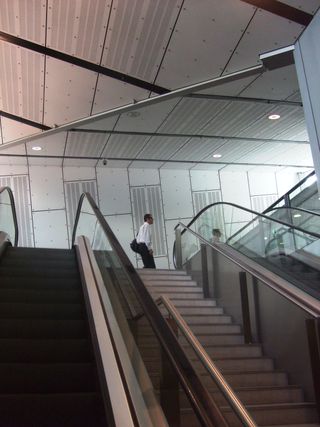 A special feature of this station is a Cycle Centre, a business where you can store your bike securely or leave it for repairs. It has its own cycle-only access from the street. 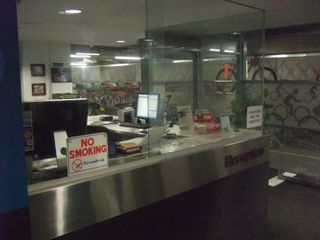 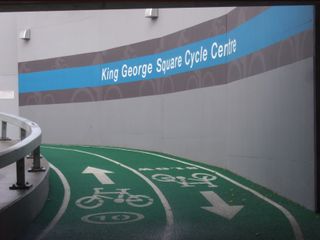 The platform looks like a modern subway platform anywhere, with burnt orange walls that echo the transit agency’s logo. 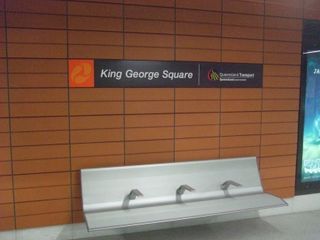 A typical subway station then, except — what’s this?? — Buses! 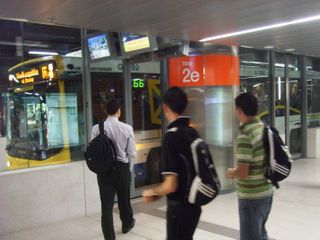 King George Station is on the new downtown segment of the Brisbane Busway network.  The new segment extends north from the existing Queen Street terminal to form a continuous bus-only roadway under the heart of the city, used by frequent service all day and evening.  Just north of this station, the busway comes to the surface and passes through Roma Street station, where it connects with the extensive commuter rail network.  Eventually, the busway system will extend in four directions from the city, in a mixture of dedicated road medians and fully separated bus roadway segments.

In the underground stations, a glass wall separates the bus lanes from the platform.  Doors in this wall are aligned with each bus door, and open only when a bus is present. 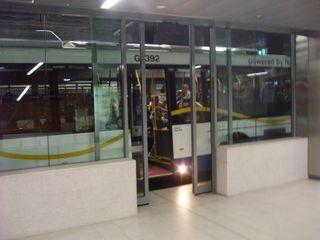 This feature provides for safety, by preventing customers from entering the bus roadway, and allows the platform to be air conditioned while the bus roadway obviously can’t be.  (The roadway is underground here but emerges just north of this station.)

Along the platform are six bus positions.  Each is typically pre-assigned to a route or group of routes.  The displays show the next eight trips leaving from each stop. 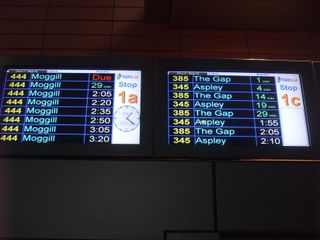 Note the service pattern: few routes, and frequent service.  Some of the busway services run partway out the busway and then branch off, while others run the busway’s full length.  These routes combine to provide intense frequency along the core parts of the busway itself.  Current service adds up to a bus every 2-3 minutes all day each way through this station, and the capacity is there to run several buses per minute.

I like this detail:  Instead of providing an automated information system for showing which bus you’re boarding, a camera takes a real-time video of the bus’s overhead sign and displays it on the monitor over the boarding door. 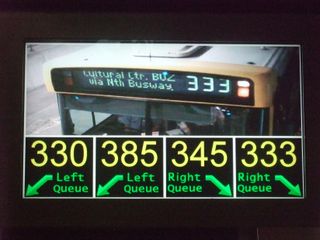 This means there’s no danger of system errors in which the platform monitor
shows one thing and the vehicle sign shows another — which is all too common in
over-automated displays.

The rapidly expanding Brisbane busway network is designed to create as rail-like an experience as possible.  Brisbane lacks large high-rise centers on the edges of the city, which are typically what you need to provide a concentrated two-way market for frequent rail transit.  The busways respond to this geography by providing a service that can branch at the outer ends to serve many destinations, while still adding up to a metro-like frequency through the dense parts of the city.  Like the Seattle transit tunnel, it’s designed to be convertible to light rail, but for now, growing volumes of buses are meeting the need.

In the next Brisbane post, a tour of some outer busway stations.

The Disneyland Theory of Transit
“Transferring” Can Be Good for You, and Good for Your City