It’s hard to pick much of a quarrel with the Environmental Defense Fund’s new report Reinventing Transit, which invites us to admire 11 US “case studies” where a major mobility improvement has been achieved fast and affordably.  The cases are: 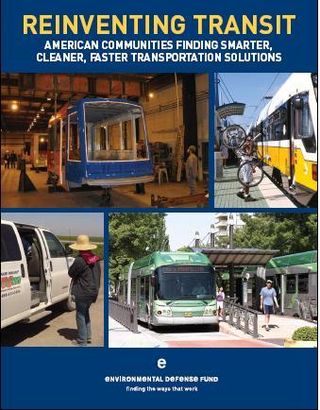 We could disagree whether these are really the “top 11,” but that’s part of the point, just as it is in those lists of “top livable cities.”  By quarreling with the list we engage in the kind of thinking that the authors want to encourage.   In this case, the goal is to inspire the general reader with the range of innovation occurring in the US transit industry.  As the authors state:

Our goal is to shatter the preconceived notion that transit is exclusive to more traditional urban centers and that it is slow and unreliable.  Through 11 case studies, we demonstrate how cutting edge transit has been implemented quickly and cost-effectively in a variety of settings from urban to rural.

There are at least three separate and interesting strands to this  statement:

The political need to embrace rural and outer-suburban constituents is an imperative for all regional transit agencies as well as for state and Federal politics,  and it’s achieved here, as always, at the cost of a certain strategic vagueness.  You can run transit anywhere you want, of course, but the politically inconvenient fact remains: dense urban
centers are where transit achieves its highest
performance by almost any measure of ridership per unit of cost.  Rural and outer-suburban services can be made highly cost-effective by the fairly low standards of those kinds of services, and that’s exactly what’s being done in the case studies hailed in this report.  But if you read the report as saying that “rural and exurban service can be just as cost-effective as urban service” — which it does not quite say but certainly invites you to believe — then you’ve swallowed one of the great transit myths.

The report is admirable, though, in its emphasis on transit programs that were put in place fairly quickly, typically in just a few years.  The implied comparison is with expensive rapid transit projects — including both heavy rail and light rail — that take a decade or more to plan, fund, and build.  So of the 11 projects hailed here only one is rail — the Portland Streetcar — while no less than seven are about speeding up high-frequency urban bus services.  You can quarrel about whether they count as “Bus Rapid Transit,” but they’re certainly bus transit that’s been made more rapid, and whose rapidness is being marketed to the public.

The most important message of this report — and out of much of the last decade — is that while we often need big and expensive rail transit, we must do more than just wait for it.   There’s a series of steps that any city can take to identify and improve its major transit corridors now, by working with what’s already there — buses, usually — and doing everything we can do to make that a better product, including:

Something like this is now happening in many if not most of North America’s major cities, though often below the radar of journalists.  In most cases the effort really began in the last decade.  Transport historians may remember the 2000s as the decade when we decided to stop waiting for big projects and do what we can with what we have.  The 2010s may be the decade when those big projects start happening faster, but we’ll still be wise to do more than just wait for them.

Why Circulators (Often) Don’t Work
A Social-Conservative Case for Transit?

You are here: Home › The Environmental Defense Fund Invites Us to Stop Waiting