Seattle Transit Blog reported some grief from the Rainier Valley area in southeast Seattle, regarding King County Metro’s proposed new bus route structure to accompany the opening of Sound Transit’s light rail line.  The issue looks like a good opportunity to look at the whole question of very short routes, or “circulators.”

I’ve copied the crucial bit of Metro’s proposed map below, and as always you can click the image to enlarge.  Downtown Seattle is just north of the map area. 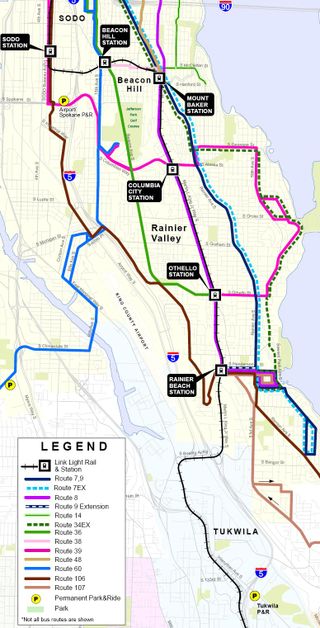 The objections to Metro’s structure seem to center on the lack of east-west services that would link neighborhoods to their nearest rail station. Earlier, Martin Duke of Seattle Transit Blog had proposed replacing the entire system with a set of short circulator routes, which would have forced almost all travelers from these neighborhoods to transfer to rail to get downtown. Metro’s proposal, by contrast, continues to serve most of the area with radial routes that run parallel to the light rail line and connect with it only at key stations.  Duke writes: “after talking to some of the Metro planning staff, it’s an article of faith in some quarters there that “circulators don’t work”

This shouldn’t be an article of faith at all:  There’s a lot of planning experience behind it, and it’s not too hard to understand the theory.  There are good reasons not to let bus routes get too long (mostly having to do with the difficulty of maintaining schedules) but there are also good reasons for them not to get too short.

Forgive me if this seems obvious but:  People get on a bus because it takes them to (or at least toward) where
they’re going.  The shorter a route is, the fewer places it goes, and
thus the fewer people will tend to get on it.  Very short routes, say
under 3 mi, tend to do very poorly unless they’re the sole means of
reaching a major destination (such a shuttle between a major hospital
and a nearby rail station.)  Metro’s own experience with a circulator
route in West Seattle is a good example.

If a neighborhood is served only with a circulator, this also puts the area one connection further away from most destinations.  Metro’s proposed structure keeps the Rainier Valley connected to the rest of the city by continuous north-south lines, increasing the likelihood that only one connection will be need to get most places.

This is an issue in the Rainier Valley because we’re talking about an inner-city area that’s relatively close to downtown.  Further out in the suburbs, it’s entirely reasonable to force transfers to rail to reach downtown, because the cost of running buses parallel to light rail goes up as you get further out along the line.  Even there, though, good design tries to provide these connections with fairly long bus routes that connect many suburban destinations to each other, to expand the range of places that people can reach with zero connections or one connection.

There’s nothing wrong with running strong, frequent routes perpendicular to a rail transit line; that’s the essence of grid design, which is the most efficient network possible where the geography allows it.  But Seattle is a city of obstacles, and the Rainier Valley has a big one.  East-west routes can’t flow west across the city from the Valley, because they would go over a cliff and then have to cross the Duwamish industrial corridor, which is remarkable for its near-total lack of east-west streets.  So east-west routes in the Valley would have to be short, “circulators,” and yes, if we want high ridership, circulators are usually disappointing.  Metro has done the next-best thing by creating the snake-shaped Route 39 (bright magenta in their map above) which provides some east-west movement while still ultimately flowing north-south, as it has to do to attract a sufficient market.

There’s a much broader lesson here that I’m sure I’ll come back to.  Localized interests (such as developers, community groups, and small city governments) tend to invent short routes — “circulators” or “shuttles” — because they are thinking about their particular transport problem in isolation.  Successful transit agencies, though, are always looking for how to serve these localized needs using longer routes that do many other things.  It’s by combining markets, not by serving them separately, that successful transit corridors are made.

“Transferring” Can Be Good for You, and Good for Your City
The Environmental Defense Fund Invites Us to Stop Waiting

You are here: Home › Why Circulators (Often) Don’t Work