From Portland’s newly rebuilt transit mall, here’s a great example of the idea that clear information is the best marketing.

Every transit  line goes TO some endpoint VIA some street or intermediate destination.  But which matters more, the TO or the VIA?  Which should be emphasized in the naming of a route and the signage on buses and stops?  Both, if you can do it succinctly.  But if you have to choose, think about where on the route you are and what information is most likely to be useful there.

If you see the bus on 6th Avenue in downtown Portland, the electric sign on the front and sides of the bus will present a nirvana of legibility:

If you know Portland, you know where Sandy Boulevard and Gresham are.  That brief sign tells you a lot about what this bus is going to do.  You may not know that TC stands for transit center, but even if you don’t, this sign tells you that there’s a bus going out Sandy Blvd. as far as Gresham.  The sign does more than identify which bus this is; it also provides a subliminal marketing function, by informing everyone who sees the bus that there is a bus out Sandy Blvd. to Gresham from right here.

The simplicity of the sign depends, of course, on the simplicity of the route.  Portland is fortunate to be a relatively gridded city with long arterials that carry a single name.  The transit agency, Tri-Met, consciously tries to design routes that follow single a arterial and name them after that arterial, so that people get the idea that the service is an intrinsic part of the street.  (Many other transit agencies do this, but there are many that could but don’t.)
The sign “12 SANDY BLVD / to GRESHAM TC” the simplest and briefest way to describe both the VIA and the TO.  Some agencies would habitually do it in the other order; their sign would say “12 GRESHAM / Via Sandy Blvd.”  That’s not wrong, but it feels more roundabout.  Especially in an urban grid like Portland, I would argue that the VIA information is more important than the TO; more people are going to points on Sandy Blvd. than are going to Gresham.  For these people, “Gresham” really means “eastward along the route.”
What matters most is that both pieces of information are there, because both are important.  If you’re going to Gresham, you still need to know that this bus goes via Sandy Blvd. because that may not be the most direct route to Gresham from where you are.  If you’re already out on Sandy Blvd. somewhere, the “to Gresham” is still helpful as confirmation of which way on the route this bus is going.
Good wayfinding has a bit of redundancy to send confirming signals that a person is going the right way or choosing the right service.
(The only time you don’t need the VIA is when the line you’re describing is always the fastest route between all points on the route, including its endpoints.  For example, a sign on Portland’s rapid transit system, the MAX light rail, can just say “GRESHAM” because from all points on the line light rail IS the fastest way to get to Gresham.  The light rail system is simple enough that there’s no question about what route it will follow to get there.  Even so, VIA information never hurts, as redundancy.  Signage on New York subway trains, for example, often mention which Manhattan avenue the line follows.)
All the same considerations apply to the information on a transit stop.
Now consider this very prominent sign, from Portland’s newly rebuilt transit mall along 5th and 6th Avenues in the heart of downtown.  (In case you’re wondering, this one’s at 6th & Oak!) 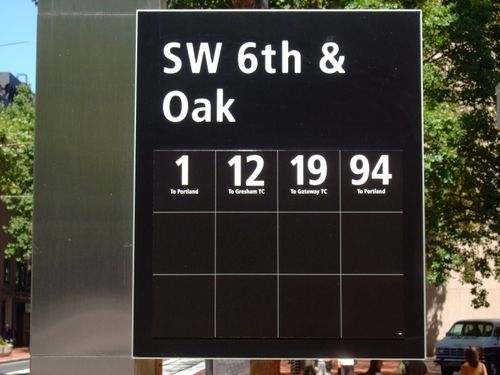 To be fair, this isn’t specifically a transit mall problem; Tri-Met’s stop signs fail to give the VIA information anywhere, even at other transit centers where it’s the more important than the TO.  San Francisco MTA, for example, always gives you both. 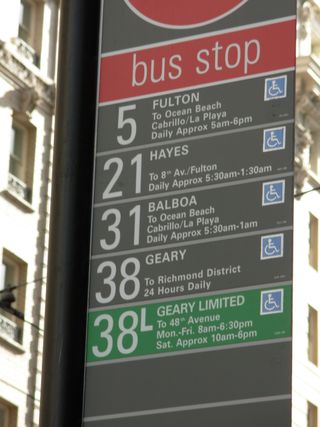 On this typical San Francisco sign, the all-caps text is a streetname (i.e. the VIA information) while the TO information is just below it. 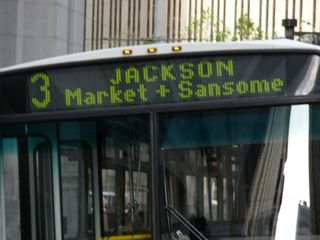 If you like legibility as much as I do, watching buses on the Portland transit mall can be a real pleasure, because most of them display prominent electric signs that tell you as much as they can, in just a few words, about where this bus is going.  Their cumulative effect is a sensation that a lot of the city is easy to reach from right where you are.  To anyone who knows Portland, there’s very little mystery about signs such as:

Because these signs flash so prominently in a place where most of Portland will walk by at one time or another, I suspect they do a lot of good subliminal marketing.  You would have to be pretty self-absorbed to walk down 5th Avenue every day and not learn that there’s a bus from here going out Division Street.  If someday that fact turns out to be useful in your life, there’s a chance you’ll remember.

Transit services, including bus services, can be pretty legible, if your transit agency cares enough to get it right.  How is your city doing?

25 Responses to Legibility as Marketing: The “To-Via” Question

You are here: Home › Legibility as Marketing: The “To-Via” Question