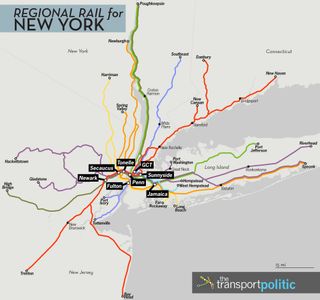 [Alon Levy’s] post on The Transport Politic about through-routing commuter rail in New York brought up a question I’ve had for several years regarding transit systems. Why isn’t through-routing more common? This applies to rail, BRT, regular bus, etc. It seems that through-routing all or most of a city’s lines via a central transit center provides all the benefits of the “hub-and-spoke” model but also eliminates the need for transfers for a significant minority of people. Is there a downside or cost that isn’t apparent at first?

Through-routing means that a route designed to carry people to/from a downtown doesn’t end in the downtown; instead, it flows across downtown and out the other side as a different route.  In Alon Levy’s vision of New York area commuter rail, for example, the trains flowing into Manhattan from Connecticut (red on the map) would flow through the city and out onto southern lines in New Jersey, and vice versa.  Through-routing means that downtown is in the middle of a line, not at the end.  You can do the same thing with any kind of radial (i.e.to/from downtown) transit service, bus or rail.
Through-routing has these colossal advantages:

So why isn’t there more through-routing?

Legibility as Marketing: The “To-Via” Question
Mundane Things That Matter: Abolish US$1 Bills!

You are here: Home › Why Isn’t Through-Routing More Common?