For several years I worked on a Strategic Public Transport Network Plan for Australia’s national capital, Canberra, so I’m happy to report that the plan has now been released for public comment.
The concise Executive Summary pulls together a number of key ideas about long-term transit planning that I’ve found useful in many cities, so even if you don’t know or care about Canberra you might find it interesting. 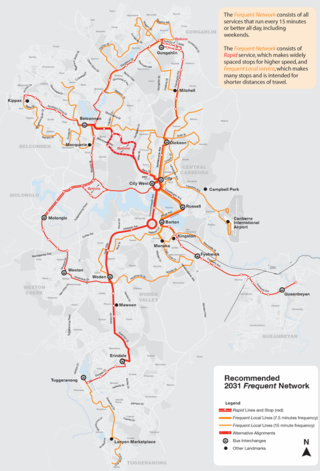 The most important single idea in the plan (as in much of my long-term planning work) is the Frequent Network, which consists of services that will run every 15 minutes or better all day, every day of the week.  This is the level of service that can motivate people to choose a transit-dependent lifestyle, because it assures you of the ability to get around without building your life around schedules. The proposed Frequent Network includes Rapid service (red lines in this image, stopping at “stations” every 1 km or so, averaging 40 km/hour) and Local service (orange, stopping every 200-400m, averaging 20 km/hour).   (As always, click image to enlarge.)
The plan is intentionally silent on questions of bus vs. rail.  The red lines on this map could eventually be light rail, and the orange lines could even be trams (streetcars).  The crucial point is that long-term planning must proceed without waiting for those decisions.  The point of identifying the Frequent Network over 20 years in advance is so that land use planning and development can start to respond to it. Ultimately, the adopted version of this map should be the authority on future service not just for the transit agency, but also for the land use agency, social service agencies, and ultimately for anyone who makes a decision about where to locate anything.  The long-term message is simple:  If you want really good transit service, locate on the Frequent Network.  If good transit isn’t important to you, locate somewhere else.
In the public consultation period now beginning, we’re asking the public three really hard but really important questions:

What I’m trying to do in constructing these questions is separate technical thinking from value judgments. The three questions above have no technical answer because they are questions about what the community wants and values. As a planner my role is to ask those questions but not express my own values on them, and I recommend that the local transit staff take the same view. However, the questions are technically framed; I’ve constructed them so that when the community answers them through its elected officials, that answer can actually be implemented.

This is an important difference from many of the “visioning” processes that are often used to elicit a community’s desires and hopes. Such processes often seek consensus by steering away from the hardest choices that need to be made, while my goal is to steer right into them.
One of the main reasons that skilled and talented people leave the transit industry is the impossibility of meeting conflicting political demands.   For example, I’ve actually seen cases where elected leaders told a transit agency to cut service on high-ridership route A in order to add new service to low-ridership rural area B, and then complained to staff when that change caused total ridership to go down. Obviously, if you move a service from a high-density area to a rural area, you should expect exactly that result. These hard-but-important questions are designed to elicit direction about the real choices that transit requires us to make, so that talented staff feel supported and encouraged as they follow that direction in building and operating the transit system.
(Frequent Network map by Transit Graphics.)

How Paris is Like Los Angeles (via New York)
Symbolic Logic for Transit Advocates: A Short but Essential Course