Last week Portland’s Metro released a High Capacity Transit study, which identifies the region’s next priorities for rapid transit.  Rapid transit, as explained here, encompasses high-frequency services that serve widely spaced stations rather than local stops.  It’s typically implemented by “metro” heavy rail, light rail, or Bus Rapid Transit, though the first of those is unlikely at Portland’s scale.  The official US term is “high capacity transit (HCT),” a term I like less because it’s more removed from the customer’s point of view.

Since we all look at the pictures before we read the words, here’s a picture of the long term Portland vision (click, as always, to enlarge): 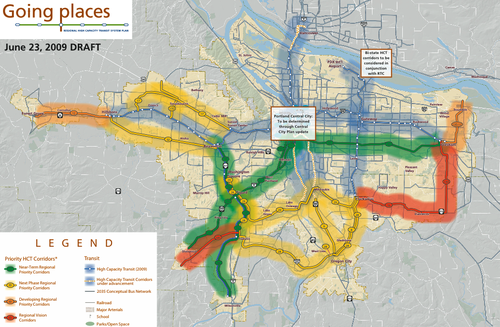 I want to notice a couple of really smart things about this plan, plus a curious one:
First, the sequence of priorities here is very much related to the willingness and ability of the cities to contemplate major increases in density.  The red and orange lines are lowest-priority because they require the biggest transformations in urban form, and require these of outer-suburban cities (such as Forest Grove, Troutdale, and Damascus) that haven’t tried to do serious urban density yet. These rankings imply a linkage between the land use choices a suburban city makes and the quality of transit service it can expect.  This is an absolutely crucial mode of thought for rational long-range transit planning.  The long-range decisions that do the most to drive transit’s success are land use decisions, not transit planning decisions.
A second smart idea is a Green Bridge, a term I borrow from Brisbane, the pioneer in this field.  The line crossing the river between Milwaukie and Lake Oswego would be on a bridge reserved for transit, bicycles and pedestrians.  The nearest bridge for private cars would be a couple of miles further north (the rebuilt but still two-lane Sellwood Bridge).  Green bridges are a great way to use a natural obstacle to create a huge travel time benefit for sustainable transport modes.  Brisbane already has one green bridge and two others are being pondered.
(Portland, I should note, is planning its first green bridge, near downtown, as part of the Portland-Milwaukie light rail line.  It sits in an area that already has lots of bridges, so it won’t be as much of a travel time benefit for transit over driving. It will get three important bus lines out of some serious traffic and take them closer to important dense growth areas on both sides of the river, while also serving light rail and the Portland Streetcar.)
Third, the north-south green line on the west side of the city is the higher-priority Beaverton – Wilsonville corridor.  This corridor already has commuter rail, running at 30-minute frequencies and only during the commute peak.  A less clear-sighted urban region would have assumed that because there’s some rail service there, there’s no further rapid transit need.  In fact, there’s a potentially strong market, especially if the downtowns of Beaverton and Tigard grow denser in response to their light rail services to Portland.  Metro has made clear that the current peak-only service can’t be the last word.
Finally, the curious thing:
The other two “next priority” radial corridors (green on the map) are Powell Boulevard extending east from downtown and Barbur Boulevard extending southwest.  The intriguing thing is that in the planning of the last few decades both of these boulevards have taken on a particularly car-oriented character.  This is clearest in the case of Powell, the green line extending east of the city.  While the streets parallel to Powell, such as Hawthorne and Belmont, have been developing urban neighborhood centers and a much more pedestrian-friendly character, Powell has been the places where car-oriented businesses (gas stations, tire shops, car repair etc) tend to gather.  Powell is also the widest of these streets, the one still designated as a US Highway, and the one that carries the most freight.  So it’s interesting to see the high-quality rapid transit service go that way.
The study is circumspect about questions like whether you would take away traffic lanes and what redevelopment would occur.  But the map is clearly making a strong statement.  In the back of some planning minds must be the idea that Powell is a relative blank slate — that even this, the only car-oriented street left in this part of the city — doesn’t need to be car-oriented forever.

The Problem with Downtown Shuttles
On One-Way Loops