A common misconception about downtown areas is that great things can be achieved by “shuttles” or “circulators,” short routes that just run around in downtown.  The problem with these lines is that they save time for the customer only if they are very, very frequent.  This is an issue that separates people who need only a symbolic service (such as a line on the map or a photo of the transit vehicle in front of the development they’re trying to sell) from people who want actual mobility.  [2015 update: I’d no longer use the term “mobility” here. I’d use “abundant access.”]

Frequency is really important, but it’s also really expensive.  Doubling the frequency of a service (i.e. halving the “headway” or elapsed time between consecutive trips on the line) comes very close to doubling its operating cost.  If you double your peak frequency (i.e. the highest frequency you run) it also doubles your fleet, which doubles your fleet capital cost, your ongoing mainteance cost, and the size that your storage and maintenance facility needs to be.  So it’s not surprising that we see a lot of downtown shuttle services that offer a line on a map, a photographable vehicle, and even some mobility for people who aren’t in a hurry, but that don’t really compete with walking.

For an example, let me pick on a very credible-looking route from a proposed downtown Oakland (California) streetcar network, from the interesting Bay Area blog 21st Century Urban Solutions, by Daniel Jacobson of Stanford.  Daniel has lots of good ideas, and I recommend his blog, so I hope he won’t mind me using his idea as an example. 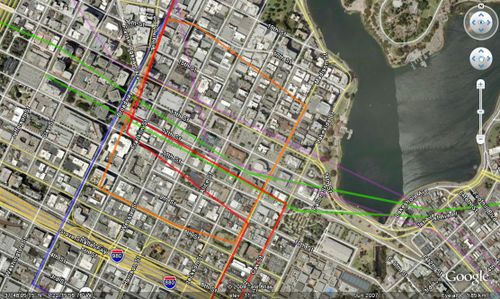 The blue, red, and green lines on this map flow across the downtown and out into surrounding neighborhoods, so they would presumably be useful to people who are travelling 2-3 miles or more.
But the orange line is just a simple square loop.  (If you know Oakland, the four streets are Broadway, 17th, Madison, and 8th.  That suggests a one-way loop, which is a topic for another time.  For now let’s pretend the loop is two-way.)

The long sides of the loop are about 770m and the short sides are about 710m, so the longest distance served by the route (from one corner to the diagonally opposite corner) is only 1.48 km or 0.9 miles.  So if you walk at 3 mph, a walk between opposite corners of the loop would take 0.3 hours or 18 minutes.
If a streetcar or shuttle bus doing the orange line wanted to be faster than walking, how frequent would it have to be?
Let’s generously assume our service averages 10 mph.  Well, the travel time onboard to go 0.9 miles at 10 mph is 0.09 hours or 5.4 minutes.  So if you just missed one trip, and the streetcar is still going to be faster than walking, that means the next one needs to come soon enough that your travel time plus wait time doesn’t exceed the 18 minutes it would take you to just walk the whole way.  The in-vehicle travel time is 5.4 minutes, so that means the headway (time between consecutive trips on the line) can be no longer than 12.6 minutes (18-5.4).
To get to that, I’ve assumed that the only market the streetcar is serving is between its opposite corners, the longest possible trip that this route can serve.   But the average trip served by this route is obviously shorter.  If you assume a shorter trip, the frequency needs to be even higher.  Let’s say we’re just travelling the length of one long side, say from 8th to 17th on Broadway.  Now the walk takes 10 minutes while the ride would take 3 min, so it’s faster to walk unless the next vehicle comes in 7 minutes or less!
If every urbanist and architect and downtown booster had been stepped through that calculation, we’d see a lot fewer short downtown shuttle services, and the few we had would be much more frequent.  Such services may be helpful for people who don’t want to walk for reasons other than time (such as weather, frailty, disability, or laziness) but they offer very little to the average person who really needs to get somewhere and whose time is valuable.
Sensitivity to frequency is also the main reason why spines of very frequent bus service, converging from routes all over the city, are better than dedicated shuttles at serving short intra-downtown trips. Downtown boosters want specialized downtown services.  But if you just want to get somewhere fast in a major downtown, head for a street where lots of bus lines are running on top of each other to provide a very high combined frequency; many downtowns have one or two corridors where a bus is coming every minute or two all day.  The key here is that the bus service is there anyway, it’s already paid for, and it’s extremely frequent. By contrast, a city will need to come up with every dollar to run its specialised shuttle, and is therefore likely to settle for a frequency like 12 min or 15 min.  That sounds good, but it doesn’t compete with walking for the short trips that the shuttle claims to serve.

24 Responses to The Problem with Downtown Shuttles

You are here: Home › The Problem with Downtown Shuttles