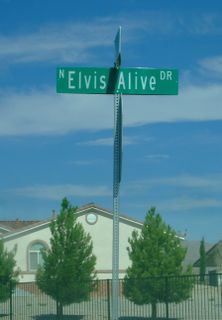 Tired of arguing about streetcars?  Let’s take a break and talk about something we’re more likely to agree on — Las Vegas!

While the city plays a crucial role in American culture as a test-site for exotic street names, I suspect we’d mostly agree that it’s not going to be a leader in sustainable urban form anytime soon. While the grid pattern of the city has some advantages (more on grids soon), Las Vegas has a particularly bad habit of building blocks of apartments in places where efficient transit will never be able to serve them and where basic commercial needs are still too far to walk. Thus achieving all of density’s disadvantages and none of its benefits.

But there are surprises.  I just completed my annual trip to Las Vegas, to see family there, and thought I’d update this 2007 item from my personal blog about this capital of churn:

All urbanists are supposed to hate Las Vegas.  Sprawling, car-dependent, water-wasting, Las Vegas is almost gleefully unsustainable.  Yet walking the Strip last month, and driving it again late at night, I was forced to refine my disapproval.  In its energy the Strip reminded me of giant tropical annual plants, like the banana tree, which are designed to burn themselves out and collapse in short order.

The metaphor is wrong as ecology — plenty of unsustainable destruction is bound up in Las Vegas’s cycles of revision — but the admiration I have for banana trees, their ability to hurl themselves to tree-size without any of the trappings of permanence, resembles the feeling of walking a Las Vegas Strip where virtually nothing is 10 years old, where everything is an endless novelty, and where today’s new towers are dwarfed only by construction cranes promising an even bigger tomorrow. 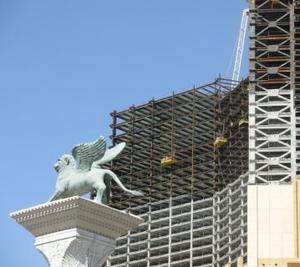 A generation ago, every student of urbanism or architecture read Robert Venturi’s 1972 book Learning from Las Vegas.  In a now-familiar attention-grabbing move, Venturi sought meaning in a place that the intelligentsia had scorned, in this case the hotel-casinos, parking lots, and enormous flashing signs of the Las Vegas Strip. Las Vegas, he argued, heralded a new but perfectly legitimate aesthetic, one that we had all better study to be ready for the future.

The book made me notice that I give my own environmental values a veto over my sense of beauty and ugliness, at least as applied to cities. To me, a hot-desert city designed to waste water and oil was simply delusional. There was no point in arguing about the aesthetic merits of a delusion. I resented Venturi lumping me in with a paper-tiger intelligentsia that condemned Las Vegas as ugly. But if asked, I’d have said yes, any human landscape that conditions its citizens to think of scarce resources as free would never appear beautiful to me in aggregate, no matter how beautiful parts of it might be.

I don’t always conflate the true with the beautiful and the delusional with the ugly; I’m receptive to fantasy in literature and film. I did a degree in theatre after all. But a city is an act of collective imagining, one that conditions its citizens to unconscious habits even more than mass-media do. An efficient city with no imagination is dull, but one founded on delusions about the capacity of its land is suicidal. I don’t entertain aesthetic comparisons between different kinds of suicide.

Although Venturi intended Learning from Las Vegas as an aesthetic study, the book is typical of much anti-environmental writing on urban issues. The standard move in these works is to treat environmental concerns as though they were aesthetic ones, then take a long view in which these aesthetic arguments look narrow and culturally contingent, as aesthetic arguments always do.  This move — ridiculing environmental judgments as though they were aesthetic ones — is sadly common these days; Robert Bruegmann’s book Sprawl: A Concise History is an especially painful recent example.

But back to Las Vegas. Seen from the air, its sprawl clearly signifies permanent car dependence on a massive scale. But in its heart(s), and its face to the world, Las Vegas has rediscovered pedestrian scale, and swept Venturi into the ashheap. 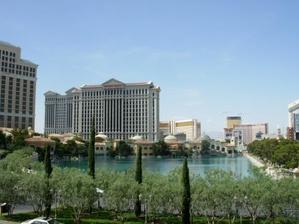 Of the major Strip hotels that Venturi studied in 1972, every single one has now been demolished and rebuilt on a larger scale. Even today the working hotels are haunted by cranes promising still larger towers in the future.  (I wrote those words in 2007, but they’re still true in 2009.  The lead-time for development is so long that it will take another year to see the full stop to construction that you’d expect the crash of ’08 to induce.)

The old Strip was a standard car-based fantasy: each hotel/casino complex was its own unrelated composition, situated up to 1/4 mile from the street behind a vast parking lot.  Today, the parking has been moved to structures in back, so that the hotels can reach toward each other with walkways and courtyards to create a vast continuous pedestrian realm. Competing hotels find that they both come out ahead if people can walk from one to the other, even further ahead if they plug into public transportation, including both the sexy casino-funded monorail and the unremarkable but jam-packed double-decker buses, called “The Deuce.” The effect is an extraordinary massing of pedestrians typical of San Francisco, New York, and other similar bastions of the urbanist left. 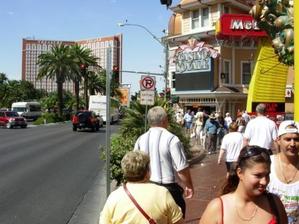 (The 24-hour nature of the economy also ensures 24-hour transit service, an unusual feature in a city of this size.)

There’s plenty to dislike about Las Vegas, but as I walked the Strip, I had to acknowledge that it was reaching out to me, welcoming me as a pedestrian. This new principle of design, more than the ostensible new preoccupation with “family” entertainment, is what makes the Strip seem so much less sleazy than the place Robert Venturi and I both knew in the 1970s.  Even I contributed to the new economy, buying a latte and a margarita in the course of the afternoon.  I’d never have done that if I’d had to drive there.

Streetcars: An Inconvenient Truth
The Problem with Downtown Shuttles

You are here: Home › Learning, Again, From Las Vegas