It’s a big day for streetcars.  Portland has released its draft Streetcar System Concept Plan, an ambitious vision for extending the city’s popular downtown streetcar all over the city.  There are similar plans underway in Seattle, Minneapolis, and many other cities.

I love riding streetcars, and I don’t want to shock anyone, so let’s start with a warning: This article contains an observation about streetcars that is not entirely effusive.  It may provoke hostile reactions from some streetcar enthusiasts.  It would probably be better for my transit planning career if I didn’t make this observation, but unfortunately it seems to be true, and very important, and not widely acknowledged or understood.  So I’m going to say it.
But I’m going to be very careful.  As I said in this blog’s manifesto, “my goal is not to make you share my values, but to provide perspectives that help you clarify yours.”  If you’re a streetcar advocate, I want to help you be a better one by really understanding a critical issue that doesn’t get talked about very clearly in most streetcar debates.  It goes to the fundamental question of why you would build streetcars in urban corridors where there’s already a good bus route.

Enough cautions.  Here it is:

Streetcars that replace bus lines are not a mobility or access improvement.  If you replace a bus with a streetcar on the same route, and make no other improvements, nobody will be able to get anywhere any faster than they could before.  Likewise, if you build a streetcar instead of a good bus line, that money you spend above the cost of the bus line is not helping anyone get anywhere any faster.

This makes streetcars quite different from most of the other transit investments being discussed today.

To take one of the most famous examples, San Francisco’s F-Market streetcar does achieve better travel times along Market Street than the old 8-Market trolley bus that it replaced, but it does this because the street was redesigned in a way that made transit of any kind more reliable.  Like most buses, the 8-Market ran in the right (outside) lane, where it had the usual interference from parallel-parking movements, right-turning cars, etc.  Some of its stops were pullouts (a designated gap in the parking strip where buses pull up to the curb, largely leaving the traffic lane).  Pullouts are good for getting buses out of the way of cars but not a good way of running buses reliably, because the bus often has difficulty getting back into traffic. 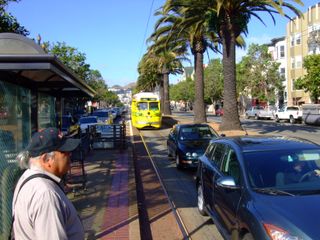 When the 8-Market bus was replaced by the F-Market streetcar, the streetcar was placed in the left (inside) lane, stopping at island platforms.  This eliminated conflicts with right turns and also eliminated the pullout problem.  These improvements were made together with the streetcar, so people naturally think of them as streetcar benefits, but they were logically independent.  The same street design could have been done for the bus if the City had wanted to, and it would have achieved the same speed and reliability benefit.
Later, on the Embarcadero, the F-Market was extended to replace the 32-Embarcadero bus.  Here, the streetcar was placed in an exclusive median right of way.  That, obviously, was a huge speed and reliability improvement.  But it was the exclusive right-of-way, not the streetcar, that created this benefit.  Such a right of way could have been built for buses to yield the same outcome.
Are there cases where a mobility improvement (i.e.  enabling someone to go somewhere faster than they can now) follows logically from the streetcar technology?  Yes, there are some:
Let me review carefully what I’m not saying about this incredibly sensitive topic.
Most important, I’m not saying in the abstract that streetcars are good or bad.  I’m saying that they are a major capital expense that requires a justification other than mobility (“getting people where they’re going fast and efficiently”) when we compare them to the bus routes they replace, or that could be developed instead.  [2015 update: I’d no longer use the term “mobility” here. I’d use “abundant access.”]  If you want a streetcar because  you think it will make your city a better place, then build it for that reason.  If you want a streetcar because of the development it will attract, fine, though this suggests that (as in Portland) the landowners who will benefit when the streetcar raises their property values should probably be one the main sources of the money.  But you want a streetcar because it’s intrinsically faster and more reliable than a bus — well, that’s just not true.
Both Portland and Seattle started with streetcars that don’t directly replace any existing bus services, which helped them avoid this issue.  As these networks expand, though, the issue of how to compare streetcars to existing frequent buses will come to the fore.  So let’s be clear about what we’re doing, and why.

First Update, and Another Hard Question

Since writing the text above, I’ve studied Portland’s draft Streetcar System Concept Plan and note the plan advises us to expect an average speed of 7-12 mi/hour for local-stop service (p 13) running in the outside or “slow” lane (like the current Portland Streetcar).  This speed, typical of mixed-traffic streetcars in dense areas, is easily matched and usually exceeded by ordinary local-stop bus services.  Again, if off-board fare collection were used for both, I suspect buses would be faster.  Note that the slow lane is where transit can be obstructed by parallel parking movements, right turn queues, etc.  When these brief disruptions occur, the streetcar is stuck while a bus would just go around them.

The Portland study also suggests we should expect an average speed of 15-25 mi/hour when operating in the inside or “fast” lane with island platforms (like San Francisco’s F-Market).   Again, this is easily matched by a bus doing the same thing in the same type of right-of-way with the same fare collection system, signals, etc.
So any speed advantage that streetcars have over buses is due not to the streetcar technology but to other logically independent changes made as part of the streetcar project — changes that could have been made for the bus.  By contrast, one clear speed-and-reliability benefit of the bus is intrinsic to the technology: Buses have the physical ability to go around obstructions that occur in their lane, while the streetcar is stuck behind them.
To end, then, let me ask one other hard question.
Once we have set aside the idea that streetcars are faster than buses, it appears the remaining pro-streetcar arguments appeal to the notion that the bus as we see it today is all the bus will ever be.    But buses are changing fast; if you don’t believe me, go ride the oldest and newest bus in your own city’s fleet.  The evolution of the bus, moreover, is being driven largely by demands that it better emulate the rail experience, particularly for the purpose of Bus Rapid Transit operations that consciously simulate rail.  A lot of work is going into creating bus services that can do many things that we currently associate only with rail, such as:
I’m not saying that the bus will ever be a perfect replica of the streetcar.  It won’t.  But they key fact is that buses are not just improving, they’re improving in the direction of emulating rail.  This should suggest that the difference between bus and rail, as perceived by ordinary people who don’t know which features are intrinsic, is going to diminish over time, as it has been doing for the past two decades.  Doesn’t this suggest that while the short-term urban-development advantage of streetcars is undeniable, the long-term advantage may be much less? Big capital spending has to make sense for the long term.  Speed and reliability are eternal values; I’m quite confident that in 2050, people will still choose a faster service over a slower one.  I’m not sure that in 2050, people will choose an electric vehicle on rails over an electric/hydrogen/whatever vehicle of the same size and shape, with many of the same characteristics, running on tires.  Are you?
Certainly, there is a strong case for streetcars (or light rail) in cases where (a) the ~50% capacity advantage of a streetcar is critical and (b) the streetcar can be placed in the “fast lane” like the F-Market or in a transit-only curb lane.  But operations in mixed traffic in the slow lane (like the current Portland Streetcar) make many transit experts nervous, becuase they are only going to get slower and less reliable as traffic increases with development.

Finally, when I say that big capital spending has to make sense in the long term, it obviously depends on whose money we’re spending.  If the property owners along a street want to pay for a streetcar, and it can be done in a way that matches the speed and reliability of the bus that’s there now (and maintain that into the future as traffic increases), then I can’t see why anyone would object.  If public money goes into it, my role as a consultant is to help communities make well informed decisions, so I’d just want to make sure that they don’t have a false expectation of the level of mobility it will offer.
I’d also caution against allowing bus services to deteriorate or stagnate as you pursue a streetcar.  (In Portland, for example, remarkably little new service has been added to the eastside grid of frequent routes since that grid was created in 1982, despite a huge growth in population in that time.)  Streetcar advocates will look more like transit advocates if they take a strong interest in making the bus service work as well.  Otherwise there will always be a suspicion that bus services are intentionally not being improved so that the streetcar looks better by comparison.
So what else am I missing here?  I’d like to be more of a streetcar enthusiast.  Certainly I’d have more friends in Portland!

Second Update, as the Comments Roll In

165 Responses to Streetcars: An Inconvenient Truth

You are here: Home › Streetcars: An Inconvenient Truth