Next time someone tells you that a light rail or streetcar or trolleybus would ruin the beautiful streetscape with their overhead wires, show them a picture of Vienna, where I am now. 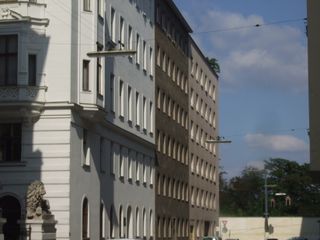 This isn’t a transit street.  Those objects hanging over the street are streetlights, and virtually every street has them. Note that there are no lightpoles — a good thing in some cases because the sidewalks can be very narrow.
Even more than most European cities, architecture and streetscape are a pretty essential part of which Vienna is famous for.  So if wires ruined a streetscape, you’d expect Vienna to be, well, ruined.
When you have these lights plus a streetcar with its power source, you get this look: 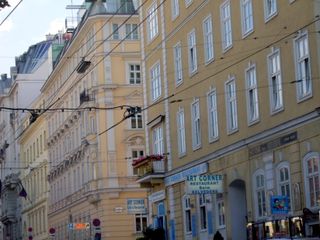 In case it’s not completely clear, the wires carrying the lights are a meter or two above the heavier wire for the streetcar.  In a way, having two layers of wires seems a little more obstrusive than just having a whole lot of wires at one layer — e.g. under a switch in a trolleybus system.  But it’s not a huge difference, and the point is, Vienna is definitely getting by.  People even photograph the streetscape, and then eat in a restaurant, and then go spend money in the shops, as though they don’t even notice all those horrible wires.
How horrible are wires over a street, anyway?
UPDATE:  Mike makes an intriguing suggestion:

I think it depends a bit on the variety of architecture on the street. In cities like Vienna and Paris most of the wired streets have pretty uniform building heights, and the wires can look like they’re part of the general grid.

Places with less uniformity in height or street width start looking messier with wires because your eye is drawn to the breaks in space. There were places in Italy with medieval towers spaced differently to the grid where I noticed the cables were like untidy spider webs.

Yes, my impression is that street-faces of typical Viennese buildings are visually interesting at the top and bottom — i.e. roof-lines and street entrances — but pretty monotonous on all the floors in between — So maybe the wires are OK because when we look in that direction we’re not trying to read any other complexity, such as varieties in building height or style from one building to the next.  What do you think?  (UPDATE: More pictures here.)

Environmentalist Critiques of Strategic Transit Planning
Vienna: Do the Wires Ruin It? (contd.)

10 Responses to Vienna: Do the Wires Ruin It?

You are here: Home › Vienna: Do the Wires Ruin It?