In talking about transit planning I’m constantly stressing the need to think in terms of interconnected two-dimensional networks, not just the one-dimensional “corridors” that are the focus of so many transit studies.  It’s a hard point to convey because (a) interconnectedness implies connections, also called “transfers,” which people supposedly hate, and (b) networks are complicated and abstract and hard to think about, which is why I’m always trying to create and promote tools for making them simpler.

What’s more, network effects are really hard to photograph.  The closest you can come is a photo of a really smooth cross-platform connection, such as this one I observed in Vienna: 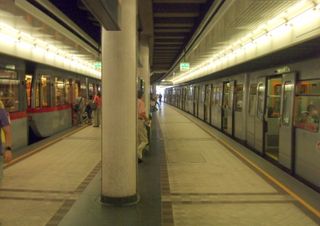 Here’s the whole network, with the red arrow indicating Laengenfeldgasse station, where the photo was taken: 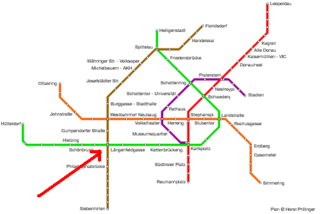 The trains in the photo are a westbound U4 (green) and a southbound U6 (brown).  So both are more-or-less outbound, but they’ve come from different parts of the inner city and are on their way to different outer suburbs.  If you’re going from a part of the city on one line to an outer suburb that’s on the other, you just walk across the platform.  What’s more, the trains actually pause here for about half a minute, so there’s plenty of time to make the move.
The trains make this timed connection even though they are both running every five minutes.  In most North American and Australiasian systems, we wouldn’t worry about trying to time a connection when things are that frequent; we’d judge that a wait of less than five minutes for a connection wouldn’t matter much.  But it still matters some, especially when lots of people are doing it, so the Austrians have taken the trouble to get it right.  Even at high frequencies, connections can be points of stress for customers, who don’t know whether the connecting train’s about to leave.  The customers on this connection can relax, because they know the trains will hold.
Notice too that becuase both trains hold, making the connection is as fast as staying on your own train; there’s no time penalty attached to the connection at all.   This is how easy connecting or “transferring” can be!
I call this a photo of a network effect because people walking from left to right in this image are making a completely different kind of trip from those walking across the platform from right to left.  In fact their paths of travel are almost perpendicular to each other, yet both find the same services useful because the connection is so easy to make.  This connection effectively doubles the reach of passengers on both lines.  That’s why good planning thinks about two-dimensional networks, even though so much of our transit planning is about one-dimensional “corridors.”
Note too that it would have been much cheaper to design this station so that U4 was all on one level and U6 all on another, because the lines obviously approach the station that way.  In that case, if you arrived at the station on a U4, the train across the platform from you would be the U4 in the other direction, which is useless to you.  Instead, they built a more expensive “weave,” separating the directions of the two lines and interweaving them so that the two outbound trains would be together at this platform, and the two inbound ones at another.  There are many weaved stations such as this one in the better transit systems in the world, and they are always a sign that the system really has been conceived as a network, not just a bunch of corridors.
Of course, many ridership models would dismiss the possibility that connections can be this easy, becuase they would assign a heavy “transfer penalty” based on much more onerous connection conditions than these.  This penalty, if overstated, will make the model biased against network benefits in general.
Connections can’t always be this easy, but good agencies are always trying to make them as easy as possible.  Remember, if your transit agency makes it hard to make connections, they don’t really have a network.  They just have a bunch of lines.

Vienna: Do the Wires Ruin It? (contd.)
Vienna and the “Style of Youth”

You are here: Home › Vienna: Weaving A Total Network