Earlier this year, Berlin’s U-Bahn opened its newest segment of subway, a 1.1 mile three-station line connecting the main rail station to the Brandenburg Gate.  It’s temporarily called the U55, but it will ultimately become part of the expanded U5 (see network map here).  From the Gate, the line will continue east under Unter den Linden, Berlin’s main processional boulevard, to Alexanderplatz, the former East Berlin downtown and one of Berlin’s most important hubs.  (From there it will continue to the eastern suburbs as the U5 that already exists.)  This is such an important segment for Berlin, both practically and symbolically, that it´s remarkable it´s only now being built.  (The Transport Politic reviewed the political history here.)

If you come to Berlin as a tourist, the completed U5 will be one of the most useful metro lines for you, as it links many of Berlin’s most important tourist destinations to the main intercity rail station.  It will also be an important line for government.  The main seat of government is the Reichstag but many government offices, embassies, and related businesses are in the Unter den Linden corridor.

More on the U5 project soon from a network planning perspective, but for now, just a quick tour of the completed stations.

Architecturally, the least interesting station on the new line is the one at Berlin’s main railway station, Berlin Hauptbahnhof. 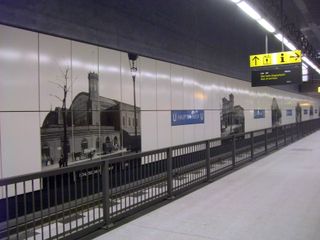 But the other two stations on the U55 are quite striking.

Bundestag station sits on some of the most symbolically freighted land in Berlin, if not Germany.  It serves the Reichstag, the 19th Century parliament building that played a central role in much of Berlin’s ghastly 20th century history, and that is now a historic shell filled with a modern building.  It also serves the point where the Berlin Wall crossed the city’s main River, the Spree, now the centroid of a cluster of government offices and memorials.

Like much of the new architecture on this sensitive site, Bundestag station is austere, as though leaving space for us to form our own views.  Its key feature is a series of pillars in a seemingly random pattern, perhaps a faint echo of the random patterns people form in a public space.  Each is topped by a circle of cool blue light. 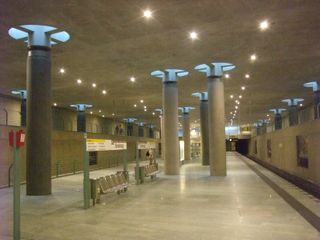 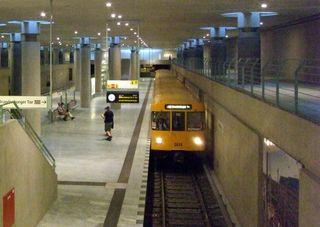 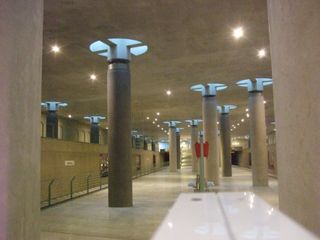 The last station, just as appropriately, is designed to please crowds.  The late 18th Century Brandenburg Gate is one of Berlin’s most iconic structures.  Given all the horrors Berlin endured in the 20th Century, it is now the closest thing the city has to an upbeat historic site.  As you descend to the platform, you’re greeted by a series of quotations from historical events surrounding the Berlin Wall.  (The first is East German leader Erich Honecker’s promise that the wall will stand for 100 years.) 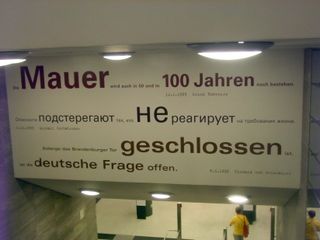 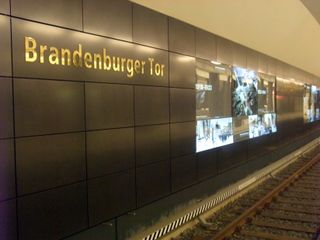 … including this remarkable photo of the Berlin Wall as it wrapped around the gate, looking as ephemeral as a Jersey barrier. 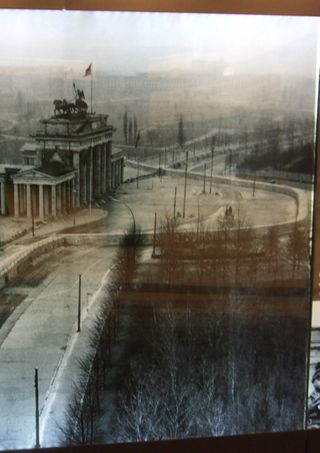 Ultimately, austere Bundestag station is the only one that aims for any architectural distinction, but that’s just one of many metrics of station design.  Brandenburg Gate station — unremarkable but crowd-pleasing — is just as appropriate given its site.  I’m sure we’ll see at least this level of site-specific thought in the remaining segment now in construction under Unter den Linden.

Can Rapid Transit Work Along Freeways?
The Other Meaning of “High-Speed Internet”