Lately there’s been a groundswell of talk among transit advocates about the need to stop building rapid transit along freeways.  To honor the imminent opening of Portland’s Green Line, which runs mostly along the east side of that city’s I-205 freeway, I thought I’d weigh in on this a little, with some relevant pictures fresh from Berlin.

First the pictures.  Here’s a not-too-unusual example of rapid transit combined with a freeway, from the upscale Charlottenberg area of western Berlin.  Let’s start with a Google Earth shot (click to enlarge). 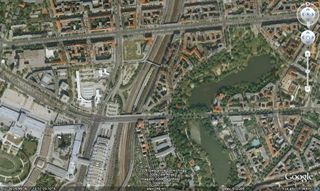 The north-south freeway (Highway 100) is part of the innermost freeway ring around Berlin, very comparable to the Périphérique freeway that encircles Paris.  The freeway is six lanes, three in each direction.  An important S-Bahn rail rapid transit line runs down the middle of the freeway.  The line is also a ring all the way around the city, linking many of its major suburban nodes. 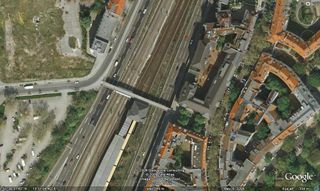 Zoom in.  Not counting the frontage road on the left, the right-of-way is about 70 metres (235 feet) wide.  (An entire Portland block, for example, would fit in this space.)  It’s so wide in part because in addition to six freeway lanes and an S-Bahn station, this segment has a separate set of tracks that serve intercity travel.  But the point is, there’s going to be a bit of a walk from a median rail station to any kind of development.

But if I stand at the station and look north, it looks like this. 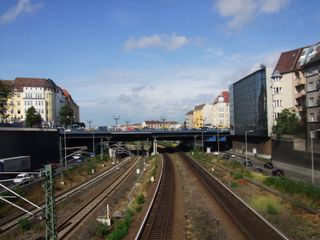 It looks as if this wide strip has always been a transport right-of-way, as historic building faces clearly orient to it just as they would to a boulevard or river.  You may not want to live facing a freeway, but some people don’t mind, or find it worthwhile in return for living on a rail line.  And as soon as you step away from the open space in either direction, you are in a dense, well-maintained, relatively upscale part of the city.

Even European cities have freeways.  They usually ring the core city and extend outward from it, rather than penetrating the center as they do in North America and Australasia.  But they’re there, and important destinations develop along them.  In Europe, rail lines were often there first and freeways added later, while many American and Australian cities are now doing the opposite.  But in either case, the result is a very wide right of way with both a freeway and a rail line, and the land use opportunities and limitations that result.  The limitations include a longer-than-ideal walk between the rapid transit station and the surrounding development.  But there are also opportunities; in the New World these include the opportunity to get new transit close to development that has already occurred around the freeway, serving that development as it is while trying to catalyze it to become denser and less exclusively car-dependent.

When a New World city builds a rail line alongside a freeway, or even in its median, nobody expects the result to look like Berlin any time soon.  But it’s not obvious that these can’t be dense transit-oriented districts in their own style a few decades from now, if that’s what local government wants.  Yes, it’s always better to have the transit stop right inside the dense commercial core of a neighborhood.  But if we make that an absolute requirement in our thinking, we end up having to choose between either

On most of the American rapid transit projects that I’ve been close to over the last two decades, any of those outcomes would have killed the project.

In the real landscapes of New World cities, a “no rapid transit along freeways rule” would have three really bad consequences:

This last point is especially important.  It’s really not helpful to imagine a future divided between happy sustainable urban fabric and benighted freeway-oriented slums.  The media will always find it easiest to explain new stories, such as the urbanist agenda, by reducing them to old stories, such as class warfare.  So we will always be hearing that the sustainability agenda is elitist, especially so long as it can’t propose answers for redeeming the freeway landscape.   So much has been invested in freeway-oriented fabric that most cities can’t abandon those areas — either politically or economically.

I’m not saying that transit on freeways is always wonderful or that it doesn’t have disadvantages.  In corridors where there are freeway and non-freeway options, a lively debate is in order.  But I am saying that a blanket slogan of “no more rapid transit along freeways” would mean a lot less rapid transit, period. 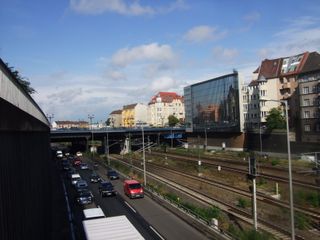 On a positive note: you can find freeway+transit development models that look pretty dense and prosperous, even if you wouldn’t want to live there yourself.  Sooner or later we’ll figure out how to build this in the New World.  We’ll have to, because we’ll always have freeways and they’re often in places where rapid transit makes sense.

57 Responses to Can Rapid Transit Work Along Freeways?

You are here: Home › Can Rapid Transit Work Along Freeways?