The last post on spatial vs narrative navigation got quite an interesting comment thread, and interesting response posts by both Angus and Cap’n Transit, all of which I encourage you to read.  Commenter Russ also offered several useful scholarly links, especially to Janet Vertesi’s very readable article exploring how the familiar London Tube map structures people’s images of the city.

Interestingly, commenters who confessed their own orientation all claimed to be spatial navigators, or in the middle but leaning that way.  Among many interesting threads, this one from commenter “Grandma” struck a chord with me:

Extrapolating a bit from educational research, spatial navigators are
probably known as visual-spatial learners as opposed to
audio-sequential learners. (Upside Down Brilliance) V-S learners have
two other characteristics that are interesting. One is that they need
to know the whole before they can even learn the parts. So, looking at
a map of just one section of the city without knowing where it is
relative to the whole is quite unsatisfying.

Which immediately reminded me of this from Cap’n Transit, on the challenges faced by someone who wants to explore and understand a city by transit:

Many transit customer service people don’t know how to deal with an
explorer. I can’t tell you the number of times I’ve asked about a route
and been asked in response, “where do you want to go?” It’s hard to
explain that I don’t want to go anywhere right now,
but am wondering if I’ll find out someplace interesting to visit along
this route.

I have had the same experience, in many cities, when I ask for a transit system map.  Surprisingly few agencies publish overview maps that show the key elements of the network, giving you the structure on which to hang local details.  “Where do you want to go?” the agent asks, and I need to say:  “I’m not going anywhere.  I’m trying to understand the city.”  I clearly have the need of Grandma’s “V-S learner”, to understand the whole before I can learn the parts. 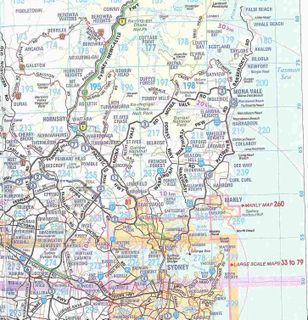 Have you ever used those map books of cities, where the city is divided into grid squares each with its own map page?  Do you need to use the grid diagram to find the page you want, or are you comfortable just leafing through the book until you find the map that looks right?  That seems a good test of Grandma’s theorem.  I’m as lazy as anyone, and hate using the grid page, but if there’s no logic to the sequence of the pages, the effect of looking quickly at many tiny windows of detail is almost painful.  All that detail with no structure.

(I can only leaf through those books comfortably if the pages are in some kind of logical order, e.g. all the maps of one row in a sequence from east to west.  In that case, I’m not really flipping in search of a page; I’m actually conceptually seeing the whole city grid in the sequence of the pages.)

Grandma also offered a great example of operating right on the spatial vs narrative frontier:

Another way in which this extreme V-S person has adapted is to use my
GPS as a two dimensional map with north always on the top of the
screen. I find that following the three dimensional diagram that is
always changing orientation means that after a few turns I do not know
where I am or which way I am heading. That may mean that I cannot solve
the problems that sometimes arise from following the GPS too literally.

Even though both can use maps, I speculate that the spatial vs narrative distinction in navigation may be related to an “objective” vs “me-centred” distinction.  (Russ was onto something similar in his comments about physical vs user perspectives.)  I stopped using Hertz GPS navigators when they stopped making it easy to lock north at the top of the screen.  Their default, and finally their only setting, was for a screen where the top was always your direction of travel, so that the screen rotated wildly with every turn.  I suspect that this default served the needs of relatively “narrative” navigators, because when you’re following entirely narrative directions, everything’s described with reference to your body: such directions usually say to go left or right, not north or south.  It’s as though you need to feel that you are stationary, and the world is spinning at your will.  I’m at the opposite extreme as a spatial navigator.  I want to believe (equally absurdly) that the world is fixed, and I’m moving freely within it.  The most extreme example of this is that I always know where north is.  If I lose it, as sometimes happens in complex subway stations, my pulse rate rises until I find it again.

I’ve opened a category on Navigation, and hope to come back to this often with the benefit of more comments and commentary.

You are here: Home › More Confessions of Spatial Navigators