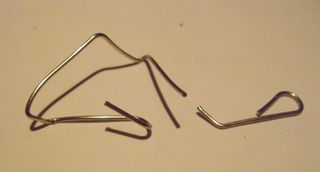 The Bay Bridge connecting San Francisco with Oakland (and most of the continent) has been closed for several days.  SF Chronicle :

The bridge was shut down Tuesday evening. High winds and heavy
traffic loosened a pair of tie-rods and a steel bracket that was
installed Labor Day weekend to take pressure off a fracture discovered
in a structural beam – an eyebar – on the eastern span.

The 5,000-pound assembly crashed onto the upper deck, totaling three cars during the evening commute.

Ney compared the scenario to a metal paper clip that snaps when it’s repeatedly bent.

Twenty years ago today, the Bay Bridge was also closed, and had been since the Loma Prieta Earthquake of October 17, when a segment of its upper deck collapsed onto the lower deck.  That one took more than a month to repair.  I lived in San Francisco then, and remember the odd calm to the city, the noticeably lighter traffic, as though some sort of extended holiday were in progress. Of course, it was hard to separate the effects of the bridge closure from the many kinds of post-traumatic stress regarding the quake itself.

Still, I’m curious.  Poking around the main San Francisco blogs and newspaper sites today, I’m struck at what minor news the closure of the Bay Bridge seems to be.  Bay Area readers, please comment:  Has the city really adapted so smoothly?  Is nobody screaming that their businesses will go under if this goes on another day?

And are we perhaps collecting data on economic impacts that might be relevant if someone proposes, someday, to convert even one lane of the bridge to non-car use?

You are here: Home › San Francisco: The Paper Clip Snaps