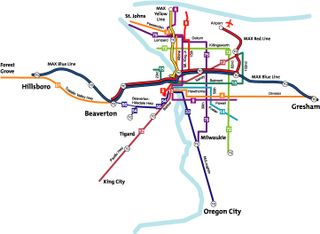 As hard budget shortfalls sweep across North America, transit agencies are making all kinds of changes to balance the budget.  Portland’s Tri-Met tried at first to cut low-ridership services, but as the red ink keeps flowing they’ve finally had to cut something every urbanist should care about.  They’re cutting the core Frequent Network, the service that’s designed to meet the needs of people who want to get around the city easily all day, with spontaneity and a sense of personal freedom.

Tri-Met was one of the first North American agencies to define and promote a Frequent Network, a clear way for customers to identify the major lines where a bus or train is always coming soon.  At the time, they defined the network as having frequencies no worse than every 15 minutes all day, every day.  They published a simple diagram of the network (above, click to enlarge) and also highlighted it on their network maps.  One theme of my professional work has been to encourage other agencies to follow their example.  Gradually, the idea has spread, from Minneapolis to Los Angeles to Adelaide; private mapmakers have also picked up the theme.  Los Angeles upped the ante: their Frequent Network is called the “12 minute network”, because it’s that frequent or better all day.

In Norton Juster’s great children’s novel The Phantom Tollbooth, a bombastic fool called the Humbug had the habit of answering every question by shouting “Seventeen!”  It’s a funny number.   Like most prime numbers, 17 carries a slight whiff of absurdity and subversion, expressed most directly in the impossibility of doing any arithmetic with it in your head.

Remembering the schedule is just the most obvious problem.  Can you remember the schedule pattern of a 15-minute service?  Easy.  All I remember is the first departure time of the hour, say :05, and I can derive the whole pattern whenever I need it, and it’s the same every hour.  If I know the service goes at 1:05 I also know it goes at 2:50 and 3:35.  Now try that with a service running every 17 minutes.

Tri-Met is not the first agency to flirt with 17, nor is this the first time.  In fact, I remember working in their planning department doing service cuts around 1984.  We talked about this very possibility, shuddered at the prospect of asking people to count by 17, and set it aside.  And we certainly hoped that in a city as pro-transit as Portland, the next generation would be fighting different battles.  We wanted to say:  “Son, we counted by 17, so you’d never have to.”

Tri-Met is doing what they can with what they have, and their planners did what they could to avoid this moment, but it’s here.  Here’s the stark fact.  In the grid network covering the densest parts of Portland, major transit spines like Belmont and Hawthorne will soon be less frequent than they were 25 years ago, even though the inner-city population they serve has grown massively in that time.  How could America’s self-proclaimed transit paradise have let that happen?

30 Responses to Portland: Counting by 17

You are here: Home › Portland: Counting by 17