Most North American transit agencies are cutting service this year, but there’s a huge difference in how they’re doing it.  My last post discussed the painful cuts happening at Tri-Met in Portland.  Here’s better news out of San Francisco, where service is being trimmed and shaped not just to save money, but to create a simpler, more frequent, and arguably fairer network.  The changes are informed by a long study and outreach effort called the Transit Effectiveness Project, which is finally bearing some fruit in this year’s harsh desert of funding.

President Obama’s adviser Rahm Emanuel likes to say: “Never let a crisis go to waste.”  Transit planners often say something similar: “Never let service cuts go to waste.”  Every transit system gradually acquires odd bits of route that really don’t make any objective sense.  They may have been added to take care of some noisy complaint, or they may just be obsolete services that have been superseded by something added more recently.  These oddities and complexities tend to hang on because if you try to cut them, the people who are used to them will complain.  There’s often just not that much to be gained — at least in the eyes of our political masters — from enduring these complaints.

So a lean budget season, now and then, can be a blessing, because it creates the political will to fix these things.

That’s the theme of the new round of changes in San Francisco.  The lines being eliminated all have some obvious built-in inefficiency or weakness.  Usually, the problem is that they overlap the market of other lines to too great an extent, so that the transit system is competing with itself.  Wherever you can replace two infrequent overlapping lines with one more frequent one, you’ve usually got a winner in total ridership terms.

Even better, they’re re-investing some of the savings in higher frequencies on the routes that remain, so that overall mobility isn’t degraded much, and may even improve in some cases. 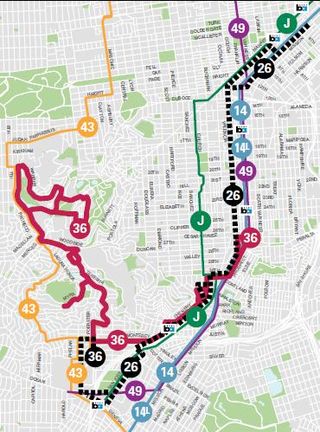 A fine example is San Francisco’s ancient 26-Valencia bus line, the dashed black line in this SFMTA graphic.  Valencia Street in the Mission district is one block west of Mission Street.  Mission Street not only has two BART stations but also one of San Francisco’s most frequent bus corridors, composed of Lines 14, 14L, and 49.  When the 26 is running every 20 minutes, the Mission buses are coming every 3 minutes or so.  Most people figured out long ago that if you’re on Valencia and you don’t see the 26 coming, walk to Mission.  You’ll probably get where you’re going far sooner than if you wait for the next 26.

Given this, what, exactly, does the 26 accomplish?  Can we really justify such an overlap when so many other corridors don’t have enough frequency?  Many have asked.

San Francisco transit geeks have been questioning the 26 for decades, but it’s always been too painful to cut.  South of 24th Street, there’s a hospital right on Valencia, St. Luke’s, and hospitals tend to be a destination of mobility-impaired riders for whom a block’s walk is difficult.  This problem has now been sort of resolved by revising the less-frequent Route 36 to go by there, but it’s still a change for hospital patrons and doubtless a hardship for some of them.

Even on the core part of Valencia, people had mixed feelings.  Valencia is a happening street.  A few years ago it was restriped to reduce car lanes, create wide bike lanes, and generally slow down traffic to support a vibrant indigenous retail and cafe culture.  Some people felt the bus was an important resource for Valencia’s identity and vitality.

Inevitably, too, some people had chosen to locate themselves or their businesses because the bus service was there, and felt betrayed when it was removed.  This is one of the many reasons that transit agencies should publish Frequent Network maps highlighting their best services, as those are the most likely to be permanent, therefore a much better basis for decisions about where to locate if you want good service.

Finally, next month, the 26 will be gone.  The need to cut total service certainly helped push this recommendation over the top.  Also important is that they had good data on ridership, as part of the ongoing Transit Effectiveness Project (TEP), and that this change was done together with a range of similar ones all over the city. The TEP has proven to be a great forum for talking about all these odd scraps of not-very-useful route that were hanging around the system.  The result will be fewer routes, but in some cases, even more access.

Portland: Counting by 17
Integrating Transit and Land Use: A Cautionary Tale

14 Responses to San Francisco: Sometimes Cuts Are an Improvement

You are here: Home › San Francisco: Sometimes Cuts Are an Improvement