Portland is supposed to be one of the US’s great transit success stories.  Is it still?  Do we know what it’s achieving?  Do we know how to measure it?

A couple of months ago, Portland reader Adrian Lawson pointed me to an Oregon Catalyst article ridiculing the Portland Metro goal of tripling non-auto mode share by 2035.  The author, John Charles, Jr., is the CEO of the Cascade Policy Institute, a conservative Oregon think tank that opposes Oregon’s land use planning system and generally favors roads over transit, so this is not a surprising view.

But the article cited some data that I found curious.  Adrian was kind enough to analyze it for me. 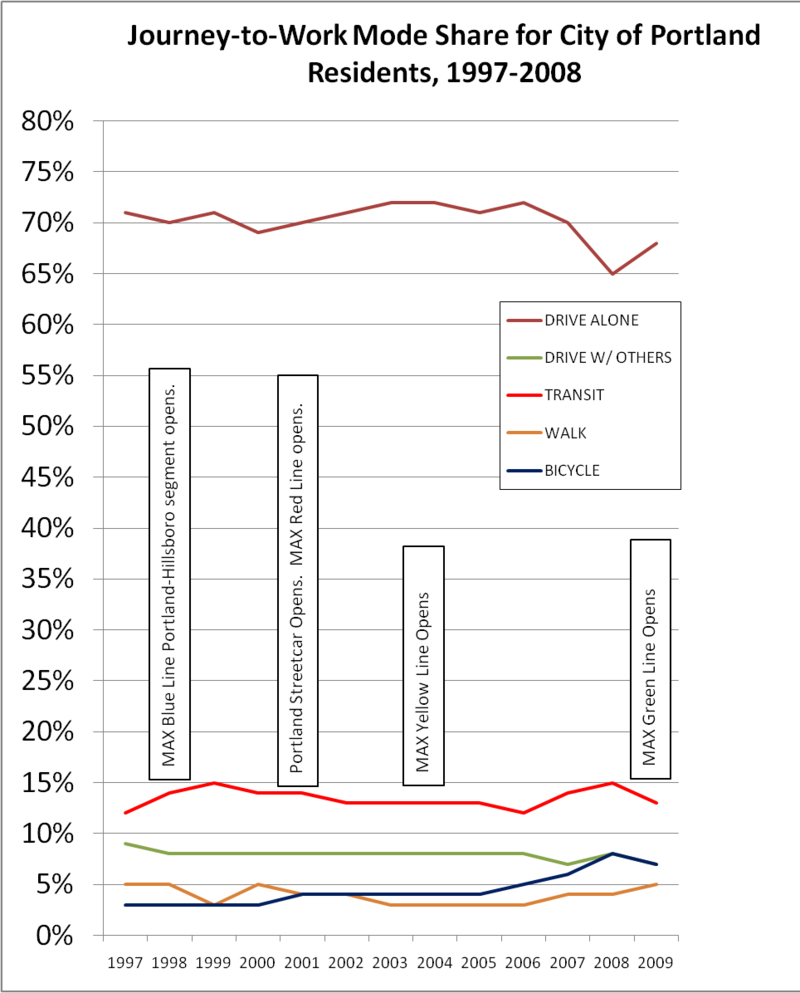 Since 1997, the City of Portland’s annual survey has been asking people who work outside the home what their primary means of
getting to work.  The answers are in this chart.  (The margin for error in 2009 was about +/- 1.7%, sample size was 3,194.  Links to the sources are in small print at the end of this post.)

(I’ve aggregated two responses “Transit” and “Drive+Transit” to get the transit scores shown.  The “Drive+Transit” response has always been in the range of 2-4% with no trend over these years.)

Remember, this is (a) only residents of the City of Portland, not its suburbs, and (b) only about the journey to work, not other journeys.  It’s also (c) self-reported by citizens rather than observed behavior.

Much of this period was a major real estate boom.  Most the dense urban fabric of the Pearl District (mostly residential with ground floor commercial, 5-20 stories, adjacent to downtown) was built, and smaller infill energies played out all over the city.  The other large project of the decade was South Waterfront, a mix of major employment, medical school, and residential served by a small streetcar extension but otherwise rather isolated from the downtown.

If we’re to believe the data, the journey-to-work results of all this investment, and all these people living closer to transit, didn’t amount to much.  Transit mode share for work trips went nowhere.  Drive-alone mode share was down around 5% on the decade, but mostly near the end.  The most striking trendline is bikes, up from 3% in 1997 to 7% in 2009.  There was a lot of work on bicycle infrastructure during the decade and a lot of activist energy.  Most people I talk to in Portland are impressed by the rising volume of cyclists and taking this trend seriously.

More troubling to me is that walk mode share stayed at around 5% even though all of this infill around downtown should have been causing some drop in average journey distances to work.

I would be more shocked to see these numbers if this had been a period of investments aimed at dramatically increasing transit mobility, by which I mean where you can get to on transit and how fast, but that’s not really what the Portland Streetcar and Yellow Line were about.  (The Red Line did improve access to the airport, and since airport lines are really about airport employees, that should have counted for something.)  But although rail gets the press, most of the city is on the bus network.  Most of the City’s bus network is unchanged (in structure and levels of service) since 1982 and saw little change in this decade.  Major inner-city corridors like Belmont and Hawthorne don’t have much more bus service than they had in 1982, which means their per capita service has actually been falling, even before the painful cuts of November 2009.

The non-impact of the Streetcar is not surprising, and easily explained from a pro-streetcar point of view.  As we saw from the comments on my streetcar post, Portland’s streetcar advocates are clear that their purpose is to stimulate development at higher urban densities.  They want to be judged on the consequences of that development, not the transportation provided by the streetcar itself.  Obviously, it’s too soon to count those consequences, though an uptick in the walk commutes as a result of this infill would have been nice to see.

To sum up, these numbers are not saying that Portland is failing.  There’s a credible argument that Portland transport thinking has been taking a long view and these numbers are a short view.  It’s also fair to say that Portland’s transit mobility, measured in the narrow sense of how much of the city you can get to how fast, hasn’t really changed much in this period, and isn’t likely to change much from any of the rail investments planned in the next decade.  Is that success?  It depends, as always, on what you value.

San Francisco: Those Service Cuts Were Fun! Let’s (not) Do It Again!
Portland: Is Parking the Problem?

37 Responses to Portland: A Challenging Chart

You are here: Home › Portland: A Challenging Chart