In posts here and here (with leftovers here), I praised the way San Francisco MTA crafted the budget-driven service cuts that went into effect last month. By deleting whole lines and line segments that had alternative services nearby, they managed to reduce service without reducing many people’s abundant access. So the implementation went fairly well.

Unfortunately, it looks like more cuts will be needed in 2010, made worse by Governor Schwarzenegger’s raids on state transit funding. So it’s understandable but distressing to hear the MTA Board’s conversation going along these lines:

Board members were heartened by the generally positive reception that the public outreach for the December 2009 service changes received, prompting director Malcolm Heinicke to wonder whether additional “planned and efficient service cuts” might be better than “de facto” service cuts through position elimination. “I don’t want to cut service. I think that’s something close to last resort,” said Heinicke. “But I also don’t want us to forget that in order to close a budget gap, we cut service [in December 2009] in a very efficient and very well publicized manner, and it actually went pretty well.”

Talking point, to be repeated ad nauseam: The fact that service cuts went well is not a reason to believe the next ones will!  Quite the opposite!

Normally, at moments like this, we hear the tired budgeting metaphor about fat and bone. Yes, they’ve trimmed the fat, but if they have to cut more they’ll be cutting into the bone. (For some reason, there’s never any meat between the fat and the bone in this metaphor, nor many brain cells for that matter.) 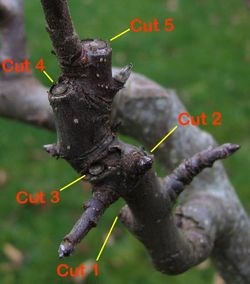 I much prefer the metaphor of the transit network as a plant, because a good network redesign often involves some pruning, especially if service has to be reduced. All those overlapping but locally loved services are a lot like what happens to a plant that hasn’t been shaped. It grows too many stems too close together. These stems compete for the limited nutrients and light, and thus none of them has the chance to grow into a healthy trunk. So you have to pick a stem to encourage and cut out the others that compete with it. That’s exactly what the San Francisco cuts did.

But that’s done. If more cuts are required, they’ll have to cut into the trunk, for example by reducing frequencies or service spans on routes that have no competition, and where the customer therefore has no alternatives. This is bad for the customer, bad for the network, bad for the tree.

The budget situation looks dire, so some regrettable weakening cuts are already on the way. But the Board that has to make them should understand the metaphor at work. Staff did a great job of pruning the tree. It looks healthier now. If you need more taken out, we’re going to have to start lopping off larger branches, or worse, cutting 10% out of each and every branch. After that, the tree’s going to look worse. It might even go into shock.

AFTERTHOUGHT:  There is, of course, another way to kill a plant.  Prune it nicely but then don’t give it the water and nutrients it needs.  Heinicke’s reference to “de facto” cuts refers to all the ways that generalized cutting of staff without specific cuts to service can cause the whole system to run less reliably and efficiently.  It’s tempting, for example, to cut road supervisors rather than drivers, but when you do that, accidents and mechanical problems take longer to recover from, and minor disruptions can turn into big disruptions.  Staff is also needed to monitor MTA’s commitment to overall quality.

So I don’t want to appear to endorse “de facto cuts.”  Those can be worse.  If they have to cut, I hope there will still be a hard look at whether any sort-of-strong branches should be removed so as to avoid having to damage most of the others.  There are still some places in the network where parallel lines are close together, though some of these are complicated by topography and affect large numbers of people.  Still, the easy ones to remove are gone now; the ones that remain are harder, but maybe the need to cut will push MTA to take on the harder ones.  Meanwhile, though, the Board shouldn’t imagine that another round of service cuts will be as pleasant as the last.  They won’t be.

Photo by MD Vaden via Wikipedia

6 Responses to San Francisco: Those Service Cuts Were Fun! Let’s (not) Do It Again!

You are here: Home › San Francisco: Those Service Cuts Were Fun! Let’s (not) Do It Again!