My post on the strategic value of chokepoints, using the example of chokepoint-rich Seattle, led to an interesting comment thread at the Seattle Transit Blog.  As often happens, discussion quickly turned to my references to rail and Bus Rapid Transit, as readers argued over whether my real agenda was to advance one of those modes.

As regular readers will know, it’s rarely that simple.  But chokepoints do point to an advantage for Bus Rapid Transit if you’re trying to do things cheaply.  That advantage is that a chokepoint that affects private vehicle traffic is effectively a kind of traffic meter.  In our* work for Seattle Dept. of Transportation in the mid 00s, for example, we noticed that congestion was actually worse at the chokepoints around the edges of downtown than right in the center of downtown.  The chokepoints were restricting the rate of flow of vehicles so that they couldn’t congest the core, exactly the way a system of freeway ramp meters can limit congestion on a freeway.

What that means is that in certain circumstances, if you give transit a clear advantage through a chokepoint, you may be able to get away with giving it less of an advantage elsewhere.  You need to be careful about this.  I’m certainly not saying that transit doesn’t need exclusive lanes through downtown Seattle; clearly it does, and the low congestion we observed is part of why that could be proposed without too severe a traffic impact.  But if you’re trying to create a transit advantage over a wide area of the city, it may well make sense to have a segment of exclusive transit right-of-way that gets you through a chokepoint, beyond which service can branch onto several outer corridors so that all those corridors can have direct access to the transit advantage. 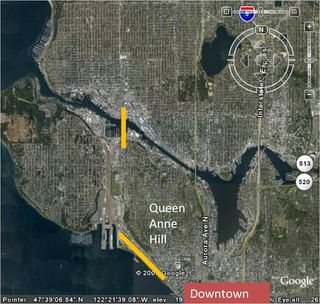 For example, look again at Seattle’s Queen Anne Hill.  In the previous post, I showed an image of the hill and explained that it creates chokepoints on both its east and west sides, where it presses against bodies of water.

Here’s the same image just zoomed out a little.  The hill is in the lower center of the image.  Just north of it is the Ship Canal.  Downtown is at the bottom of the image, so all corridors linking downtown to the northwest quadrant of the city have to go around this hill.  On the west side of the hill, there’s just one path, which is to go through the narrow space between the hill and Puget Sound (the water body on the left of this image) then north and across the Ship Canal on a single bridge.

That’s two sequential chokepoints (marked in orange on the map) where you can give transit an advantage using exclusive lanes.  But once you’re north of the Ship Canal, you’re into a wider gridded area of medium density, so travel demand spreads out.  A Bus Rapid Transit solution can start by building just the segments that transit needs to get through the chokepoints.  This infrastructure can then be used by many buses between downtown and the Ship Canal, but north of the Ship Canal those same buses can spread out over several branches to completely cover the area.  That way, everyone from the whole area north of the Canal gets the travel time advantage of the exclusive segment into downtown, using a bus that serves their neighborhood directly.  (This is exactly how the Brisbane Busways work.)

This, friends, is one thing that rail transit doesn’t do well.  A rail solution to the same problem has to build rail not just from downtown to the Ship Canal but also on all the branches you want to serve north of there.  Or, alternatively, the rail line has to end just north of the Ship Canal, or follow just one path beyond it, which means everyone else has to transfer to buses at that point.

I am not saying that you should never build rail in this corridor.  You may have capacity or local impact requirements that only rail can meet.  But meanwhile, a good bus rapid transit solution would insist on really good exclusive paths through the chokepoints from downtown to north of the Ship Canal, but would not need as much infrastructure north of there.

So what am I saying?  Imagine, for the sake of argument, that Seattle had one single goal in its transit expenditures, which was to maximize transit’s travel time advantage over driving.  You might embrace this view, for example, if you believed that travel time is, in fact, a dominant factor in determining whether people use transit.

If, hypothetically, you were trying to do that with a fixed budget, you would focus like a laser on Seattle’s chokepoints.  You’d spend your scarce dollars to build Bus Rapid Transit segments through each chokepoint, but not necessarily entire exclusive lanes the whole length of each corridor you want to serve.  And you’d use rail only where you need rail’s higher capacity.  You’d also be likely to use rail in corridors where the demand doesn’t spread out over a large area, the way it does in this example north of the Ship Canal.

Chokepoint-based strategies are especially important if you’re trying to find urgent short-term solutions for your city.  Best-practice transit agencies have short-term improvement programs running concurrently with their thinking about long-term major projects.  Sometimes, these short-term investments add up to a really clear advantage for transit that, if properly marketed, can make a big difference.  As Seattle readers know, the corridor I’ve used here as an example does have a “rapid bus” program in the works.  My point here is not to comment on the details of that program but just to point out the way a city’s geography creates opportunities.  Look for the same opportunities wherever you live.

* “our” refers to Nelson\Nygaard Consulting Associates, with whom I was associated at the time.

Leadership from Columbus: A Great Transit Advocacy Website
San Francisco: Those Service Cuts Were Fun! Let’s (not) Do It Again!

31 Responses to Chokepoints as Traffic Meters and Transit Opportunities

You are here: Home › Chokepoints as Traffic Meters and Transit Opportunities