In the last post, which explains why grids are such an efficient structure for transit, I mentioned that Vancouver has one of the best transit geographies I’ve ever encountered. Here’s what I mean. 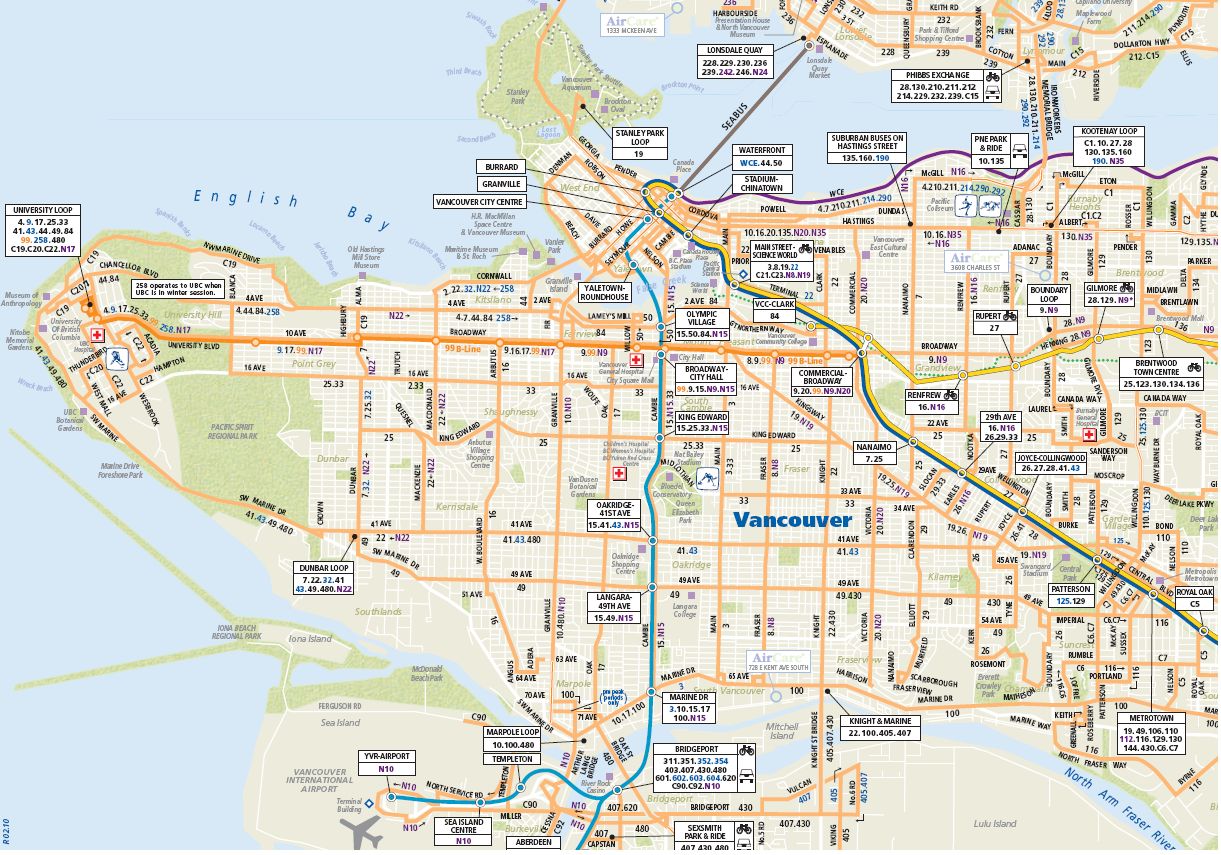 A grid pattern of arterial streets covers almost all of Vancouver. Most of the time, parallel major streets are spaced about every 800-1000m apart, and since a comfortable walking distance is about half that, this spacing is perfect for efficient transit.

But what’s really great about Vancouver from a transit perspective is the position of its major destinations.  They’re positioned in a way that solves another transit planning problem: anchoring.

If a transit line is operating through an area of uniform density, about 50% of its capacity goes to waste. That’s because the vehicle will leave the end of the line empty, fill only gradually with passengers, and reach its maximum load at the midpoint of the line.  After that, more people get off than get on.  As you near the far end of the line, the vehicle is nearly empty again.  If you plot the load of the vehicle against the position on the line, you get a bell curve:  zero at the ends of the line and its maximum level right in the middle.  If you scale your capacity to the maximum level, you end up with a lot of wasted capacity near the ends of the line and no way to make use of that capacity.

So transit planners are always looking to anchor their lines.  Anchoring means designing a line so that it ends at a major destination, so that there will be lots of people on the vehicle all the way to the end of the line.  A line with strong anchors at each end will have more uniform high ridership over the whole length of the line, and a much more efficient use of capacity overall.

So look at the network map again.  Downtown is the peninsula sticking up on the north side of the city.  If you look closely at the system map, you’ll see that most of the north-south lines extend to the north edge of the grid and then bend east or west as needed to flow into downtown.  There’s a bit of inefficiency in the resulting duplication, but it’s not too bad.  It means downtown’s major attractions and connections anchor the north end of most of the north-south lines.

But the spectacular anchoring happens on east-west lines.  At the west end of the city is the University of British Columbia, a major university that offers a fantastic deal on transit to its students.  (Your student ID is a transit pass, at no extra charge.)  UBC depends on intense transit service, and gets it.  Most of the east-west lines in the grid converge on UBC at their west end, and enjoy relatively high ridership all the way to the end of the line as a result.

The east end of these lines is a little more various, but many of them end at SkyTrain stations on the original Expo line, the blue-and-yellow line that runs southeast out of the city.  This SkyTrain line extends well out into the suburbs of Burnaby, New Westminster, and Surrey.  Most of its stations are forests of residential towers, or major commercial centers, or are trying to be.  So there’s plenty of demand for access to SkyTrain; this keeps the east-west lines busy to the east end.

The orange line on the map is the limited stop 99, which runs between UBC and SkyTrain along Broadway.  It runs limited stops between a SkyTrain station on the east end and UBC on the west end; it passes through a major high rise office core, including City Hall, in the middle.  It runs as frequently as it can physically run, generally every 5 minutes or better all day.  It’s crowded all the way to the last stop on each end.  As a result, it is by far TransLink’s most productive bus line.  Last I checked, it was one of the highest performing bus lines in western North America.  (It would do even better with some signal priority!)  Sooner or later, a rail transit line will replace the 99, and the region is arguing about that now.  More on that in another post.

So what’s makes transit so efficient in Vancouver?

The last point is the key.  If you’re a grid city with a big downtown in the middle and no comparably major centers anywhere else (like Melbourne, or Portland, or many Rust Belt American cities), you’re always going to be running a lot of empty seats on outer parts of your network, because demand just keeps falling as you move away from downtown.  The key to a super-frequent grid is to have the strong demand centers on the outer edge, so that lines are full all the way to the end.

That’s what Vancouver provides, via UBC in the west, downtown in the north, and the various SkyTrain stations (opening to a large suburban area with density around many stations) in the east.  Only in the south, along the Fraser River, does Vancouver just peter out into nothingness without a major destination at the edge.  Major north-south routes end at points along Marine Drive, which defines the city’s southern edge, but by Vancouver standards there’s just not much happening there.  From a transit efficiency standpoint, it would be a good place for some towers.

The Power and Pleasure of Grids
vancouver: the great broadway debate

You are here: Home › vancouver: the almost perfect grid