The big rail transit debate in Vancouver at the moment concerns Broadway.  You might call it Vancouver’s Wilshire Boulevard: not always a beautiful street but a very important one.  It’s the direct line east from the University of British Columbia at the west end of the city, and goes through a major office core, including Vancouver City Hall, just south of downtown proper.  It’s the busiest east-west arterial in the entire city and the site of one of the busiest bus lines in North America, the 99.  It has everything you need for successful rail transit, except consensus.  Here again is the City of Vancouver’s transit network, with the Broadway corridor in dark orange. 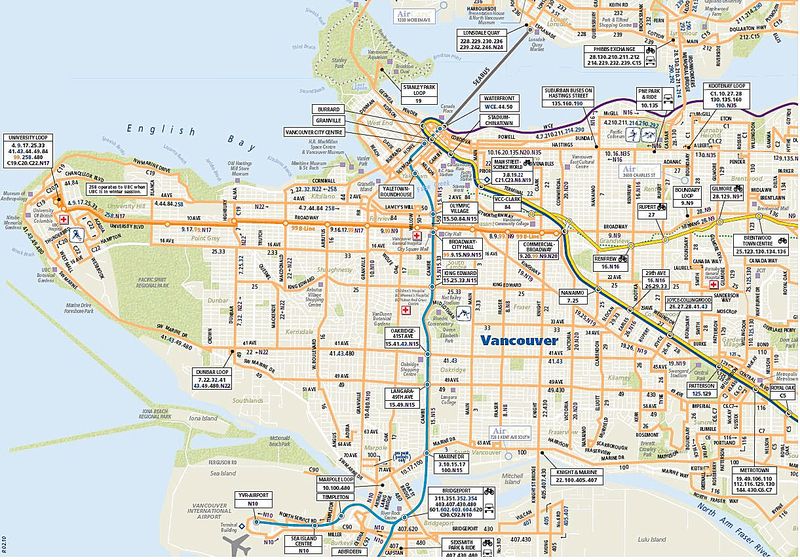 Broadway has long been a lower priority politically than it would be on technical grounds.  A region-wide process of completing a network to all the designated Regional Centres has led to a series of SkyTrain lines aimed mostly outside the City of Vancouver, including one more, the Evergreen Line to Coquitlam, still hovering in the near future.  The preference for suburban lines over urban ones has more merit here than in most North American metro areas, because most of the suburban cities this network serves are intending to build very high density around SkyTrain stations, or already have.   One of the most striking features of Vancouver, as seen from an arriving airplane, is the a chain of tower clusters extending diagonally almost all the way across the region. This chain is the path of the oldest SkyTrain line, the Expo line completed in 1986.  These towers are the land use response to SkyTrain’s exceptional frequency and reliability.  Newer lines are expected to have the same impact at many of their stations.

So as often happens, the internal circulation needs of the region’s core city are being addressed somewhat late in the game.  Broadway has long had sufficient density to support rail, especially given the western anchor of UBC, a huge university where expensive parking and free student transit passes amount to a virtual mandate that students and staff take transit if they’re not walking or biking.

A debate has erupted, however, about whether Broadway should have surface light rail or an underground extension of SkyTrain.  SkyTrain extension advocates have a nice site here.  Patrick Condon of UBC’s Design Centre for Sustainability speaks up for light rail (or as he calls it, “European tram,”) here. The debate is happening in the context of reduced funding sources which make cheapness more of a selling argument.

Here’s the core problem, though.  Look at the Vancouver region’s SkyTrain map: 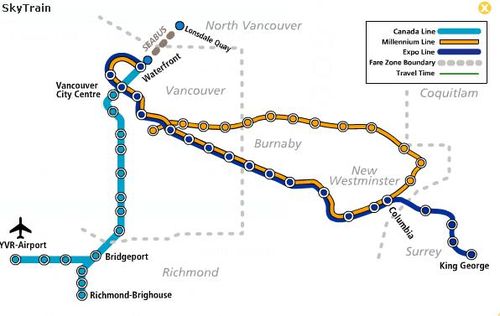 The combined yellow-and-dark-blue line is the original Expo Line from 1986, while the yellow line alone is the 1999 Millennium Line.  Note that the Millennium Line’s northern segment is functionally a separate east-west line across the region, except that it ends before it reaches downtown Vancouver or connects with the Canada Line.

In network structure terms, we would say that the northern Millennium Line ends before it has completed the grid.  At the regionwide network scale, completing the grid would mean continuing west at least to a connection with the last north-south rapid transit corridor, the Canada Line.  The current end of the Millennium Line is thus a major inefficiency in the network, one that dramatically limits the line’s usefulness and is likely to prevent it from ever being used to its full capacity.  Stations on this line are one transfer away from downtown Vancouver, but more problematic, they are two transfers from any of the stations on the Canada Line.  (This problem is made worse by the poor physical connection between the Canada and Expo Lines where they first cross downtown.  It’s necessary to ride out-of-direction to Waterfront station to make this connection easily.)

On the diagram above, the unmarked station where the yellow Millennium line crosses the yellow-plus-dark-blue Expo line is Commercial/Broadway station.  This is the east end of the Broadway corridor, the dark orange line on the city network map at the top of this post.  It has long been assumed that the Millennium line would simply continue west into a subway under Broadway.  As Vancouver city councillor Geoff Meggs put it recently:

We already have a high-speed line ending at the Millennium Line at VCC–Clark,” he noted. “It just makes sense to complete it somehow, either over to the Canada Line or, better yet, take it to Arbutus. It could be the hub of a future extension down the Arbutus corridor or over to UBC.”

Dividing the corridor into two overlapping services may seem inefficient, but in this corridor Meggs may have a point.  One problem with the SkyTrain subway all the way to UBC is that west of Arbutus St (about 2 km west of the Canada Line) the ambient density drops, and we go through several km of relatively affluent moderate density that will probably never be upzoned to a degree that would support a heavy rail subway.  So the UBC market has to justify the entire project from Arbutus west.

So despite the hugeness of the UBC market, breaking the corridor into two projects may make sense here.  Everyone in the region has an interest in a coherent regional rapid transit network; that interest argues for extending the Millennium Line to touch the Canada Line, but not necessarily to go all the way to UBC.  UBC would still have its network of very-frequent bus routes extending east along most of Vancouver’s east-west arterials, connecting to SkyTrain at multiple points.

Transit usually benefits from combining many markets into a single project, not separating them out into their own lines.  But there’s one exception: when the resulting single project ends up being so expensive and controversial that nothing gets done. A small Millennium Line extension that completes the connectivity of the rapid transit network may be a logical first step.  As many European cities prove, you can still come back later and build a much slower “European tram,” if that’s what your urbanist vision requires.

You are here: Home › vancouver: the great broadway debate