The Public Transport Users Association of Australia has a great press release and analysis on the need to re-think the ideal of a “metro,” and to question why Australians should wait decades for them. 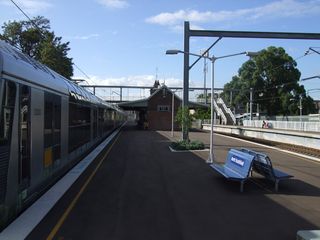 The major cities of Australia (Sydney, Melbourne, Brisbane, Adelaide, Perth) all have rather similar urban transit networks, dominated by a product that might be called European-scale commuter rail: trains with overhead-catenary power running mostly on a dedicated network.  Within the first 40 km or so of radius, these networks usually run at frequencies of 15-30 minutes, but there’s a huge surge of additional service during the peak commute period to handle the flows of commuters into and out of the central city.  Further out, many of the lines branch, or introduce diverse stopping patterns, which have the effect of increasing longer-distance speeds but reducing frequencies further, at least at minor stations. 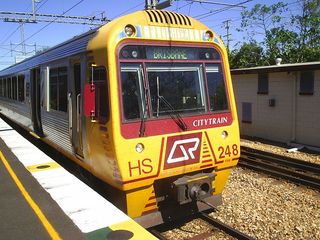 A crucial feature of these networks is that they are (a) almost totally radial, offering few if any substantial opportunities to travel between non-CBD centres, and (b) designed to cover a huge range of urban densities with the same basic product.  There’s no difference — in fleet, station facilities, staffing, ticketing, etc — between a train that you’d ride 3 km to a dense inner-city suburb and one that you’d ride 50 km or more to low-density suburbs on the outermost edges of your city.  There is often a difference in frequency — it’s usually lower further out as routes branch or introduce stopping patterns — but not always.  In some cases, such as the Inner West line in Sydney, the denser inner city stations are served by just one stopping pattern at a relatively low frequency, while most trains fly through these stations nonstop aiming for destinations further out.

As commonly happens with commuter rail, the government focus is so much on the peak-period commuter that it often misses out on opportunities to do other good things with its trains and infrastructure.  Density is high enough to support high all-day demand in the inner city (roughly comparable to the extent of each city in 1945) and at key regional centres further out.  But this demand is everywhere-to-everywhere, not just to the CBD, so it requires (a) good connection opportunities throughout the network, especially between trains and buses and (b) high enough frequencies that these connections are worth the wait.  Many of the major inner-city urban rail lines in Australia could easily run every 5 minutes or better if there were a commitment to fund operations and build connection opportunities.

For a variety of political and cultural reasons, many of these opportunities have not been pursued.  Instead, in Sydney and Melbourne especially, we’ve been encouraged to long for something called a “metro.”  Many Australians have been to Europe and often to some of the East Asian megacities.  The word “metro” is meant to refer to the high-frequency, high-capacity rail transit, usually underground, that laces the dense cores of those cities.

It’s been easy to jump from those desires to the notion that since Australia doesn’t have metros now, it needs to build them.  But Bowen’s work in Melbourne (and our own work on the Sydney Morning Herald inquiry) are pointing out that our cities already have a network of grade-separated rail lines covering the areas of European density, and that the quickest way to get a “metro” level of mobility is simply to run these lines much more frequently.

There are some barriers to this (notably the two-man crews still required on Sydney trains) but most would be easy to address if there were a conceptual shift.  The conceptual problem is that as long as our rail bureaucracies understand the peak commute to be their primary product, they will continue to care about running time more than they do about frequency.  Running time matters more than frequency only for relatively long trips (because we tolerate longer waits to go longer distances) and for rigidly scheduled trips such as classic commutes (because we select a particular schedule trip to use).  Everywhere else — throughout the inner city all day, for example — people experience frequency as maximum wait time, and are not willing to wait long to travel short distances.  Even a 15-minute frequency is on the outside of tolerable if you’re just going 3 km or so.  If you just miss one, take a cab or even a bus, and you may reach your destination sooner.

Having said all that, I do like driverless, fully-automated metros, which sever the link between frequency and labor cost and thus make it possible to run every 4 minutes even at midnight.  They have done wonders in Vancouver, not just for mobility but for urban form.  Sydney had a proposed driverless metro that would have broken ground this year, but the Government cancelled it in February 2010 after three years of confusion and acrimony.

In Sydney’s case, the process was too fast.  A long driverless metro line from the city to the northwest suburbs was suddenly announced in 2007, using a corridor that had never been identified for rapid transit in any land use plans.  When that proved too ambitious, it was hacked back to a tiny metro that barely got out of the CBD, which proved to be too disruptive to the life of the city and yet not long enough to do much good.  From the beginning, too, the media treated the metro as a political attack on the existing rail system and its unions.  That wasn’t entirely untrue, but it was certainly exaggerated, and while inter-agency spite can be a powerful political force in planning, most people agreed that it wasn’t a very good basis for a multi-billion-dollar infrastructure investment.

Even if Sydney had proceeded with starting a driverless metro system, the vast majority of the city would have continued to depend on the existing rail product, and would have needed to see further investment in all-day frequency to make the existing lines more “metro”-like.  So now, in a way, Sydney has a clearer path.  We have the tracks, the wires, the stations, and the trains.  All we need is a new commitment to all-day service.  It’s not cheap, but compared to an all-new all-underground automated metro, it’s a bargain.

Portland: The Lure of the Unmeasurable
Human Transit: The First Year

You are here: Home › Australia: Pitfalls of Metro Envy